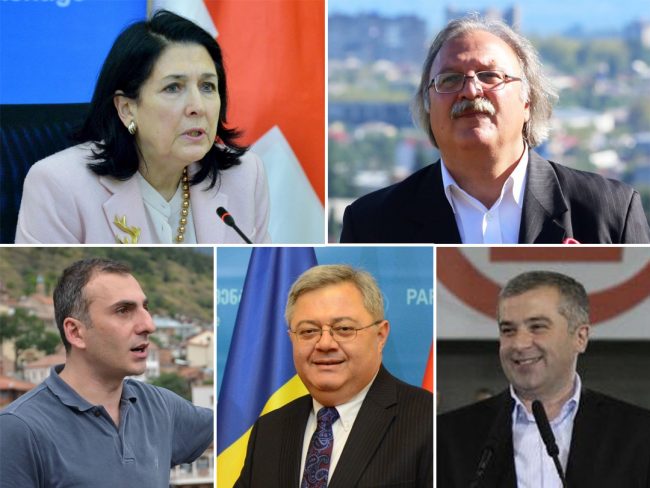 Georgian President Giorgi Margvelashvili has announced that presidential elections will be held on 28 October. The election date was one of two issues the Georgian political class, public, and the country’s international partners had been waiting for Margvelashvili to decide on. The other — whether the current president plans to run again.

The Georgian Constitution required the President to set the date of the October election no less than 60 days in advance, but several candidates and the ruling party had been urging Margvelashvili to set it as soon as possible.

Although the date is set, many unknown elements remain: the ruling party, Georgian Dream, has yet to formally confirm its candidate, and Margvelashvili has yet to announce whether he will run for re-election.

In 2017, Margvelashvili tried, albeit unsuccessfully, to mobilise the public against constitutional changes that have made this upcoming election the last to directly elect the president by popular vote. With his nationwide campaign, The Constitution Belongs to Everyone, the former Georgian Dream ally criticised amendments that ‘deprive people of their right to elect a president’, granting this prerogative to a 300-member election board instead.

[Read more about changes in the electoral system and other areas on OC Media: Georgia’s constitutional changes explained]

Salome Zurabishvili — the chosen one

Georgian Dream appeared confused about their plans for the election until a TV interview with party chair Bidzina Ivanishvili, in which he strongly suggested he would like his party to support an ‘independent candidate’. Since then, most of the party’s leaders have spoken favourably of Salome Zurabishvili. As she has reportedly already addressed the French embassy to renounce her French citizenship (a requirement for the presidency), Zurabishvili seems to be the uncontested choice for the party in power. Both Georgian Dream and Zurabishvili have promised to clear things up in the upcoming days.

If elected, Zurabishvili would be both the first foreign-born and the first female President of Georgia. Born in France to a Georgian political émigré family, she left behind a successful career in France in 2004, upon former president Mikheil Saakashvili’s personal invitation to join his team. She was hailed for leading negotiations with Russian Foreign Minister Sergey Lavrov on the removal of military bases from Georgia and criticised for her crude remarks to opponents.

In 2005, Prime Minister Zurab Noghaideli sacked Zurabishvili as Foreign Minister after she turned her rivals among the core of the ruling UNM party into enemies. Critics, former Parliamentary Speaker Nino Burjanadze among them, accused her of nepotism and mismanagement in the foreign ministry and of disrespecting Parliament, criticising her also for keeping a salary as a French diplomat while serving and being paid as a Georgian minister. Zurabishvili insisted she had fought a ‘clan’ system of government and accused her former allies of ‘neo-Bolshevism’.

After her dismissal, Zurabishvili was active within the opposition anti-Saakashvili movement, leading her own Georgia’s Way party, until temporarily leaving politics in 2010. Having returned to Georgia during the pre-election turmoil that resulted in the first peaceful transfer of power in 2012, Zurabishvili has always been sympathetic to Bidzina Ivanishvili. However, she has consistently kept her distance from his party.

After a fallout with their previous presidential choice, Giorgi Margvelashvili, Georgian Dream was expected to seek a more predictable and less rebellious team player; hence some GD members’ doubts about Ivanishvili’s insistence on her candidacy. One member noted that ‘she would be even more independent [from Georgian Dream] than Margvelashvili’. Georgian Dream is currently still considering their options, ranging from either fully endorsing Zurabishvili, to merely not fielding a candidate, — similarly to what they did in 2006 local elections in a Tbilisi district where Zurabishvili ran as MP unchallenged.

Overall, Zurabishvili's potential candidacy has been interpreted by some as Ivanishvili’s attempts to extend his own personal influence beyond, and probably even at the expense of, his own party, while arguing at the same time that by doing so, his ruling party is not so power-hungry as to fully fight for the presidency.

The Movement for Liberty — European Georgia’s candidate is Davit Bakradze, Parliamentary Speaker from 2008–2012 and a current leader of the UNM spin-off party. Running counter to the popular belief that the Georgian electorate favours hot-blooded politicians, Bakradze has enjoyed high ratings across party lines, reportedly for his calm and conciliatory style of communicating with political partners and the public. He has faced criticism for his complacency in parliament’s diminishing supervisory role over the executive branch under Saakashvili.

Although the runner-up to Margvelashvili in the 2013 presidential election, it remains to be seen whether Bakradze’s ratings will again translate into electoral support.

In opting to support his candidacy, European Georgia chose to maintain a distinct party identity, rather than joining the so-called ‘United Opposition’ led by the UNM.

European Georgia, as the second biggest party in Parliament, currently heads the commission looking into possible violations in the Khorava Street murder investigation. As large anti-government demonstrations related to the investigation (which were co-opted by the UNM) gradually waned off in early June, European Georgia chose a more institutional strategy to go after possible violations by the authorities. Hence, the Commission’s final findings and recommendations are expected to be a part of their pre-election criticism of the government.

Bakradze and his party are also likely to continue to focus primarily on government spending, mismanagement, corruption, and the economy in their campaign.

Grigol Vashadze is a former Russian citizen who renounced his Russian passport after the 2008 August War. He let go of his non-affiliated status only in early 2017, joining the UNM and running for Mayor of Kutaisi in October. Vashadze finished second, denying Georgian Dream’s Giorgi Chighvaria an overall majority, but refused to participate in the second round of voting alleging electoral fraud.

Georgia’s third President Mikheil Saakashvili, sentenced to prison in absentia by a Georgian court on several counts of abuse of power, has been advocating for a united oppositional front to ‘remove Ivanishvili from power’. UNM succeeded in setting up the Power is in Unity coalition, which chose Vashadze to run for the presidency. But, the coalition looks to be only a formal affair, as other than the UNM it consists only of marginal political parties with a weak or no electoral record.

In early July, the UNM and European Georgia made a deal brokered by the European People’s Party, the largest political grouping in the EU Parliament and which both parties are members, to abstain from attacking each other and to support the other’s candidate in a possible second round. But the agreement looks to have been short-lived after Vashadze lambasted European Georgia on 30 July, blaming their members for ‘all the ills’ during the UNM’s rule.

Grigol Vashadze’s talking points are yet not widely known to the public, partly due to the protracted launch of the formal pre-election period.

On 31 July, former Parliamentary Speaker (2012–2016) Davit Usupashvili announced his candidacy for president. The news followed unsuccessful negotiations to team up with President Margvelashvili, another former ally turned critic of Ivanishvili.

Usupashvili and the Republican Party which he led for years were a liberal group who reportedly enjoyed Ivanishvili’s trust within the Georgian Dream coalition. In the 2016 parliamentary elections, the former Parliamentary Speaker and his Republican Party attempted a soft break from the coalition, testing their strength independently, but fell short of crossing the 5% threshold to enter parliament. Their electoral failure brought about a fallout between the party and Usupashvili, leading to his eventual departure.

The rejection from Margvelashvili is likely a blow to Usupashvili, who has been struggling for a fresh start with his new Development Movement Party.

As liberal candidates associated with Saakashvili appear so far to be the main challengers to Georgian Dream’s favoured candidate, the ruling party may enjoy a sense of comfort in the elections, rebuffing their opponents’ criticism with references to their political pasts.

In this context, plans for a smaller liberal candidate not affiliated with Saakashvili (i.e. the Republican Party, Free Democrats, or President Margvelashvili) seem relevant only if they were thinking of teaming up with Aleko Elisashvili.

Aleko Elisashvili, an independent, could be a black swan destabilising this otherwise predictable election. Since Georgian Dream came to power, he has become the only opposition political candidate to significantly challenge the ruling party, coming second in the 2016 Tbilisi mayoral election. Rumours of his candidacy began to circulate after Margvelashvili refused to ally with Usupashvili, and these have only escalated since Elisashvili has declined to refute them.

Provided he has maintained his political ambitions, however, it is questionable whether Elisashvili would be interested in spending his political capital for a highly visible but politically limited political post.

Beyond Bakradze, Vashadze, and Usupashvili, the list of confirmed candidates also includes Labour Party Chair Shalva Natelashvili, who has routinely run for the post without success. There are two newcomers in the running from opposite fringes: libertarian Zurab Japaridze, whose Girchi Party was recently successful in litigating for the legalisation of cannabis consumption, and Sandro Bregadze of the ultra-conservative Georgian March, a group that may be interested in testing its power, at best, to compete for a conservative niche occupied by the Alliance of Patriots, which barely crossed the vote threshold in the 2016 parliamentary elections.