There are simple ways to encourage teachers in Georgia to report suspected domestic violence. But the authorities should not use them until they can effectively respond to reports.

Domestic violence was widely suspected to have increased during the COVID-19 crisis, with the UN Secretary-General describing a ‘horrifying global surge’.

A study CRRC Georgia conducted for UN Women prior to the crisis found a behavioural lever that could encourage teachers to report domestic violence they suspect among their students. Yet, the report suggests that until the government reforms the currently dysfunctional reporting infrastructure, encouraging teachers to report could do more harm than good.

This suggests that efforts should focus on using behaviourally informed interventions that nudge the authorities to respond to the reports they receive before rolling out large-scale efforts aimed at bystanders.

The Teacher Reporting of Violence against Children and Women study aimed to understand whether there were behavioural levers that could encourage teachers to report domestic violence.

Teachers were the target group of interest as they work closely with children. In this regard, it is generally accepted that the signs of domestic violence against both children and their mothers show up in children’s behaviour.

Moreover, legislation passed in 2016 requires teachers to report suspected domestic violence in Georgia. According to the legislation, there is also a school reporting officer, who is often either a school resource officer (known as a mandaturi — school security guards) or the principal if the school does not have a resource officer.

The problems the authorities need to fix

The study suggests teachers are generally aware of their responsibility to report. Yet, they were hesitant to do so, because they think that the authorities’ and particularly the police’s response will lead to more harm than good.  As one teacher stated:

‘I think about this frequently — which one is better, to report or not to report. Considering the last case in Kachreti, reporting sometimes results in such a catastrophic consequence… Those who should solve a problem, on the contrary, make it worse… And I was thinking what is better, to speed up such a catastrophe or stay indifferent?’

This fear was also reflected in the responses teachers gave on the study’s survey. When asked what might make their colleagues hesitant to report domestic violence, a fear that institutions would respond ineffectively was among the top three reasons given. 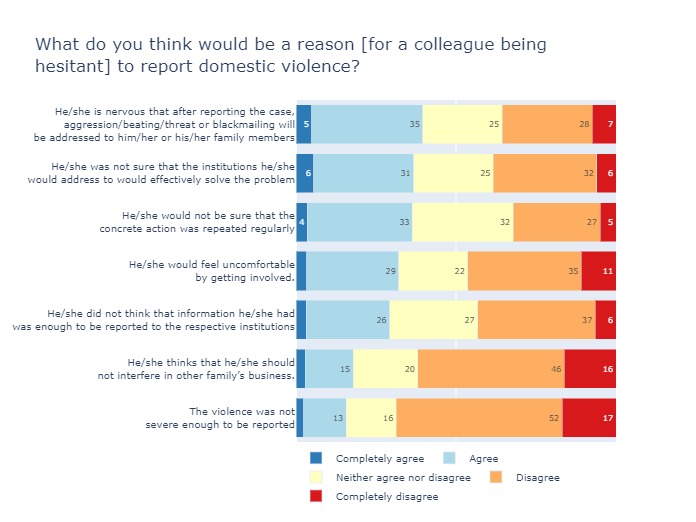 Aside from being afraid of the consequences of a report for the victim’s personal safety (or even the perpetrator’s, as the Kachreti case demonstrates), teachers were often also afraid for their and their family’s safety as the chart above shows.

As one teacher stated: ‘[If you report] they call you a backstabber, because you collaborate with police […] I want to protect myself since all the violence will be redirected to me, and they will tell my children that your father called the police.’

The lack of confidentiality also feeds the fear that teachers will face physical reprisals as a result of making a report. As one teacher stated: ‘guaranteed confidentiality is not in place here.’

Even in the absence of such fears or where they are overcome, people who report domestic violence encounter difficulties in getting the police to respond adequately to the situation. As one school resource officer stated: ‘When we call the police, they say, “What happened? Who hasn’t fought?” We even sometimes have to beg them to come to our school.’

One of the sources of the problem is that some police officers do not take domestic violence seriously or even think it should be brushed under the rug. A school resource officer, when discussing an instance where they reported a case of domestic violence, stated, ‘They [the police] advised her [a child who was beaten by her father] not to make the complaint harsh and if she would change her complaint and write it in a “more beautiful” way, her daddy would go home in the evening.’

On top of the above, teachers realise that even if the police act effectively, most victims end up worse off as a result of reports. Families lose one or the only breadwinner, and teachers know the economic situation of the abused will deteriorate.

Economic consequences aside, the abused also face social pressure, shame, and fear of the perpetrator’s return as a result of the report.

The lack of socio-economic and psychological services, which are quite scattered and fragmented in Georgia, cause or exacerbate these issues. For teachers, the legal responsibility to report violence is outweighed by the moral responsibility to protect the safety of victims and not to add economic problems to the abuse and other issues they already face.

How teachers can be encouraged to report

If teachers are encouraged to report domestic violence, it seems like they will be met with an ineffective response, discouraging them from reporting suspected domestic violence in the future.

It is easy to imagine this devolving into a cycle wherein following failed responses, teachers discourage others from reporting through a demonstration effect.

In this context, there should be a reasonable degree of doubt about how much people should be encouraging teachers to report domestic violence. However, if the situation does improve, the study also provides some evidence about messages that could encourage teachers to report.

To test whether different messages might encourage teachers to take concrete steps towards reporting, the study randomly assigned three different messages to teachers and then measured their willingness to take a number of different actions surrounding domestic violence. The three messages included a social norming message, the provision of legal information, and both the previously mentioned messages combined.

The social norming message highlighted to teachers that most people in Georgia find domestic violence unacceptable. While this may seem like a longshot at making change, previous research has shown the effectiveness of highlighting social norms that people are unaware of in changing behaviour.

The second message informed teachers of their legal responsibilities to report. It was provided based on the assumption that many might not be aware of this duty.

The third treatment combined both of these messages, with the goal of seeing whether the sum would be greater than the component parts.

Although not direct measures of intention or actual reporting, the logic behind these measures is that a) attitudes relate to action, and b) in Georgia many are unwilling to provide their contact information (as this study re-affirmed). Hence, if the messages could encourage people to change their attitudes or take an action many would be hesitant to, then the message is likely on the right track.

The results of the experiment found few significant results, with one exception. The study asked teachers if they would be interested in participating in training on domestic-violence-related issues, and if they were, to provide contact information.

Among those that were interested, teachers were 10 percentage points more likely to provide information so that they could be contacted for training if they received the social norming message. 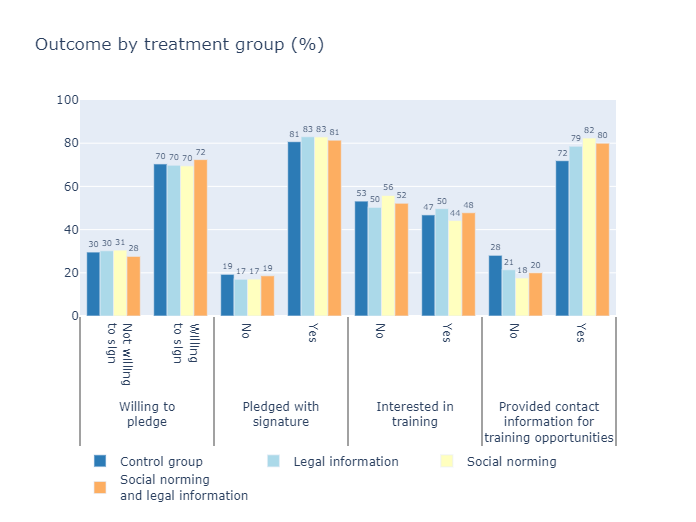 For instance, the study found that the legal information messages were effective with men but not women.

While the study provides extensive detail on what messages are likely to work and for who, the main finding of the study is that before engaging in large-scale encouragement of teachers to report domestic violence, the government needs to adequately respond to the reports they already get. To do so, the study’s findings could be informative.

Although the social norming message appears to have the most potential, the legal message appears to work with men in particular. Since the police force is largely male, using legally based messages with police officers may be particularly effective at encouraging adequate responses to domestic violence.  However, to confirm this suggestion, further research is needed.

The study has numerous findings and can potentially inform efforts at encouraging the authorities to respond appropriately to reports of domestic violence. It also provides a detailed set of recommendations on how to encourage teachers to report domestic violence.

However, until the time the problems described in this article are fixed, it is questionable whether encouraging bystanders to report domestic violence will help or hurt.

The views presented in this article reflect the views of the authors alone and do not reflect the official positions of UN Women, the Danish Government, CRRC Georgia, or any related entity.