A wave of protests unusually widespread for Georgian leftist groups hit the capital Tbilisi this winter, after revelations of dreadful labour conditions in the country emerged. The question is, whether the protests can be transformed into a genuine, grassroots left-wing movement.

After several unsuccessful trials, the grassroot workers’ movements from Tbilisi and beyond have found the power to stand together against harsh working conditions and exploitation, activists argue. Left-wing groups have supported and led the outcry, hoping that the process is the beginning of a wider leftist crusade.

Who’s fighting for what?

Labour rights in Georgia have recently become a critical issue, with several activist groups referring to the situation as a ‘social crisis’:

I attended several rallies organised, among others, with the help of the controversial student group Auditorium #115, which was established in early 2016, and has been continuously occupying one of the buildings of Tbilisi State University (TSU) since November to demand educational reforms.

During these protest rallies, I’ve met people not only from Azoti, GPB, Fresco, and Biblus, but also people working in the industrial towns like Zestaponi, Chiatura, Tkibuli, Ksani.

‘Workers from Zestaponi stand in solidarity with the Azoti workers’, Giorgi Giorgidze, a worker from the Zestaponi Ferroalloy Plant, told me when I met him at a rally in Tbilisi on 10 February. ‘As an ordinary worker, I condemn such shameful behaviour from employers’, he added.

The Zestaponi plant has a history of strikes. The plant belongs to a company called ‘Georgian-American Alloys’ (GAA), which also operates in the mining town of Chiatura, in western Georgia, and has been accused several times of using exploitative labour practices. The company has denied any violations of the law.

I noticed a banner at the rally for Rustavi Azoti plant saying, ‘Chiatura miners stand in solidarity with you’. The man holding the banner was Paata Samkharadze, who I had previously met at several protest rallies in Chiatura. 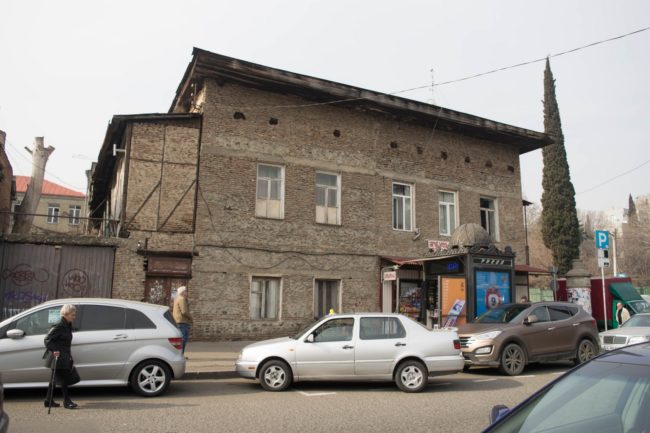 ‘It’s terrible how powerful companies don’t even feel guilt when letting employees go without prior warning, but instead of just confronting companies, we need to put pressure on the government’, Samkharadze told me. The working class needs to stand together to reach the authorities and urge them to change government policy to support employees, he added.

A miner from Tkibuli, Levan Beshkenadze, came to Tbilisi to support workers from Rustavi last week and to ‘fight a mutual problem’. In February 2016, miners went on strike in Tkibuli, demanding a pay raise, but achieved only a 5% rise in wages.

‘Tkibuli is 500 km (310 miles) away from Rustavi, and some might think that I don’t have anything in common with people from Azoti that I’ve never met’, Levan says, ‘but we all share the same experience — unjust treatment from employers — and standing together is the only way to achieve change’, he says. I was told exactly the same time and time again, by a woman from the Rustavi plant (who prefered not to share her name), as well as employees of Fresco, Biblus, and others. 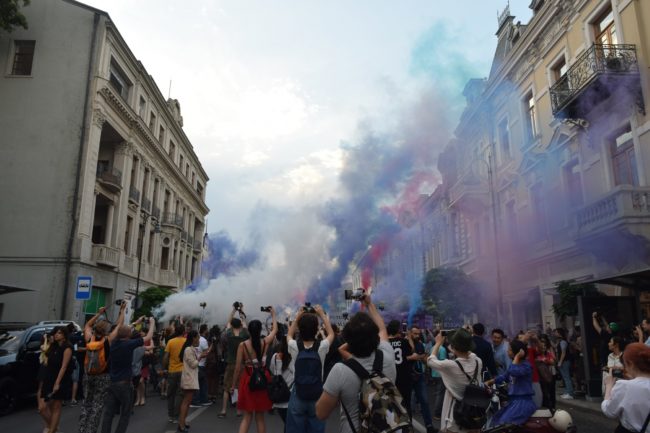 The main problem is that the country’s labour code supports employers over the rights of employees, explained Lasha Meskhi, a GPB journalist, and chair of the Trade Union of Journalists, which he created with his fellow reporters last year.

Indeed, the labour code has been described as ‘a paradise for employers and hell for employees’. Positive changes were made in the labour code in 2013 in order to bring more balance. However, many non-governmental organisations say the changes don’t go far enough, as the government still considers labour disputes as private disputes between employers and employees. Activist groups are now calling for an effective mechanism for labour inspection to be created.

Typically workers’ movements in Georgia have fought short-term, local battles, in specific rural or urban areas. People faced the same problems, but stayed isolated from one-another, so the sparks of protest would quickly fizzle out. But today, as they stand united, we are witnessing an entirely different thing, according to Giorgi Sopromadze, a member of Auditorium #115 and Green Fist (an environmental group from Tbilisi). He associates the lack of labour rights to an economic agenda of deregulation, blaming political elites for maintaining the status-quo.

Class struggle is mentioned often at rallies and in private conversations. ‘A society is not consolidated around religious or nationalist values and principles. A society should be considered as a two-class society’, said Giorgi Ghvinjilia, an activist, while addressing demonstrators in front of the Chancellery building, Georgia’s seat of government.

However, Sopromadze and many other activists I’ve been talking to have abstained from calling the movement a ‘leftist movement’. I’ve been asking the reason for this. ‘The demands and goals are more important than the name itself’, another member of Auditorium #115, and founding member of Green Fist, Levan Lortkipanidze argues.

One reason could be that not all members of Auditorium #115, for example, consider themselves leftists. To try and fully understand this unwillingness to be seen as ‘left-wing’, we might need to dig deeper into the political landscape and contemporary history of Georgia.

After the collapse of the Soviet Union, Georgia survived the ultranationalist government of Zviad Gamsakhurdia, corruption during Eduard Shevardnadze’s rule, and a peculiar mixture of free market economics and nationalism under Mikheil Saakashvili’s United National Movement (UNM), which could be described as the marriage of the state with free-market policies.

With the late Kakha Bendukidze’s radical deregulation policy beginning in 2004, just a year after Saakashvili came to power in the peaceful Rose Revolution, the state began to let business take over the country, Lado Jalaghonia, an activist and philosophy student from Ilia State University, who’s been following left-wing groups and dynamics in Georgian politics, tells me.

Jalaghonia argues, that during this time, while economic growth reached historic levels, the policy of deregulation widened the gap between social classes, creating a social crisis. He argues that UNM’s policies created an ideological monopoly around free market economics, where anyone expressing diverging views, or declaring themselves a leftist, would be marginalised. ‘You could not say you were into reading Marx a few years ago’, Jalaghonia told me the other day; but recently, he claims, this has definitely been changing.

After the 2012 parliamentary elections, Saakashvili’s UNM handed over power to the current Georgian Dream (GD) government, which many expected to be more left-wing. However, despite establishing a universal healthcare system, they turned out to be very ideologically amorphous, with current PM Giorgi Kvirikashvili stating he is ‘more of a centre-right politician’.

A centre-left party affiliated to the ruling GD party, the Social Democrats, made it into parliament after the 2016 parliamentary elections. They recently presented an initiative to the State Constitutional Commission, which is to table constitutional amendments before 30 April. The initiative advocates for including social rights in the constitution and for abolishing the current requirement for a referendum before changing the upper tax limit. The last initiative is seen as a prerequisite for establishing progressive taxation. However, both of their initiatives have caused controversy among the opposition, ruling party, and the mainstream media.

The Social Democrats have come under fire for cooperating with and being soft on the ruling Georgian Dream (they ran a joint election campaign with them). GD’s billionaire founder, Bidzina Ivanishvili, has also long been accused of interfering in Georgian politics, and is considered by many to be the real ruler behind the scenes. This puts GD, and by association, the Social Democrats, at odds with activists, who consider this ‘inappropriate for a people-oriented government’.

Given GD and its allies’ lack of clear vision, disillusionment with UNM, and the emergence of the  far-right Alliance of Patriots in parliament, a common idea has began to emerge in the corridors of Tbilisi’s universities and amongst the protesters on the streets. The idea that emancipation of grassroot left-wing movements might lead not only to a widespread social protests, but also to the establishment a highly functional left-wing political party.

‘What is happening now? The crisis is leaving the shadows. And the task of the left is to understand that the economy and all social structures are based on us — ordinary people. As soon as we understand that the system relies on us, and as soon as we see the broader picture, the current system will self-destruct. And this is where the genesis and function of a left-wing movement, and later, a party, must be seen’, Jalaghonia explains.

Is the dawn coming for the left?

While marching on Tbilisi’s central Rustaveli Avenue and Freedom Square, singing a Georgian arrangement of the late Florence Reece’s iconic song, ‘Which side are you on’, students, activists, and workers from all over the country have received a lot of criticism for their ‘radical ideas’ and ‘radical actions’.

These are not the brightest days for Auditorium #115. Since they started occupying the sixth building of Tbilisi State University last November, they have come under fire for interfering with the learning process. Furthermore, on 9 February, the movement stormed the building of GPB, demanding 5 minutes live on-air, which was a controversial move.

‘Some people are calling us radicals’, one of the activists, Giorgi Ghvinjilia said on the demonstration. ‘But in reality, real radicals are sitting in offices and do not care about the lives of ordinary people. Today, common sense stands with us, while they stand with the radical, reckless order, which needs to be destroyed. The main question is — which side are you on?’