The share of Georgians who think the country is a democracy is at its lowest for the last decade. Supporters of the ruling party are the exception to this trend, tending to believe that the country’s democracy remains a good example for others.

Newly released NDI/CRRC data suggests that Georgians are growing increasingly sceptical about democracy in the country. Except for supporters of the ruling Georgian Dream (GD) party, a majority of all other groups think that Georgia is not a democracy. 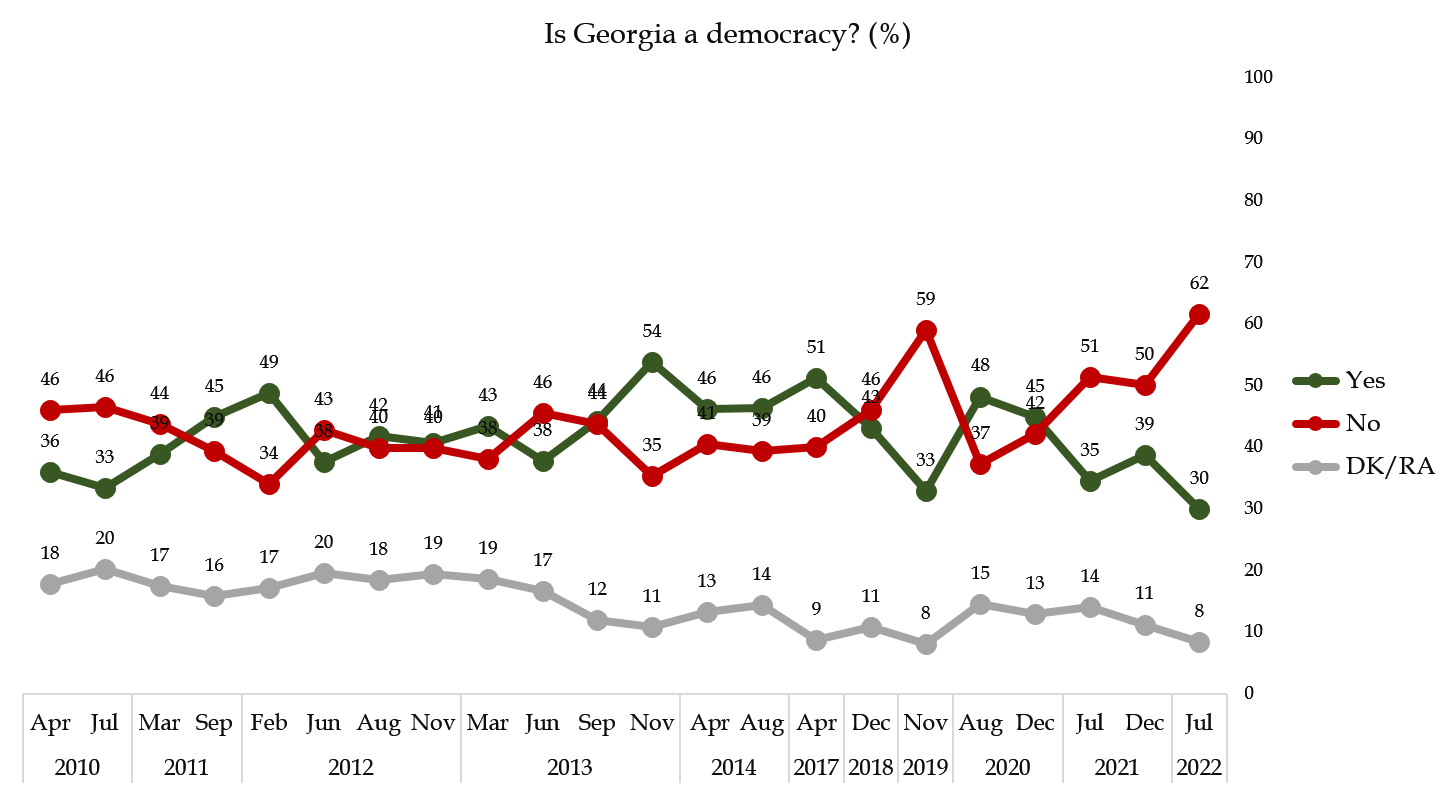 Logistic regression analysis was conducted to understand the differences between different groups. Age, sex, settlement type, employment status, ethnicity, and wealth are not associated with whether people think Georgia is a democracy or not, while education and party support are.

GD supporters constitute the only group in the electorate of whom a majority think that Georgia is a democracy, controlling for other factors. 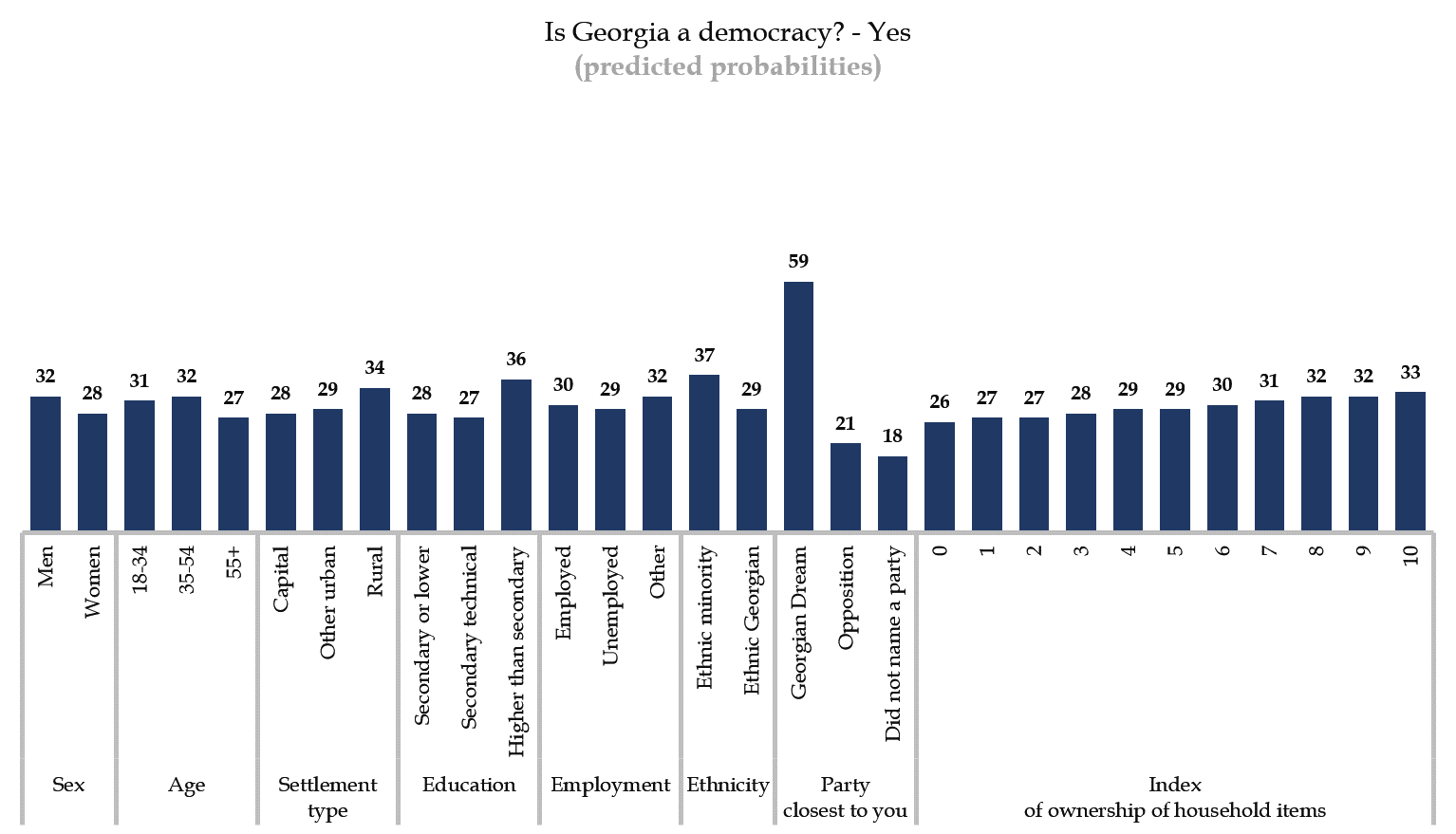 Another question on the NDI and CRRC August 2022 survey leads to similar conclusions. A quarter of the public (25%) think that Georgian democracy is a good example for neighbours, 31% believe that the country used to be a good example but ceased to be one, and another quarter (25%) feel that Georgia has never been an exemplary democracy. The remaining fifth (19%) of the electorate report that they do not know.

Multinomial regression analysis was conducted to better examine group differences. The results yielded were similar to those of the previous analysis. GD supporters hold exceptionally dissimilar and at the same time optimistic views regarding the quality of democracy in Georgia compared to the rest of the population. 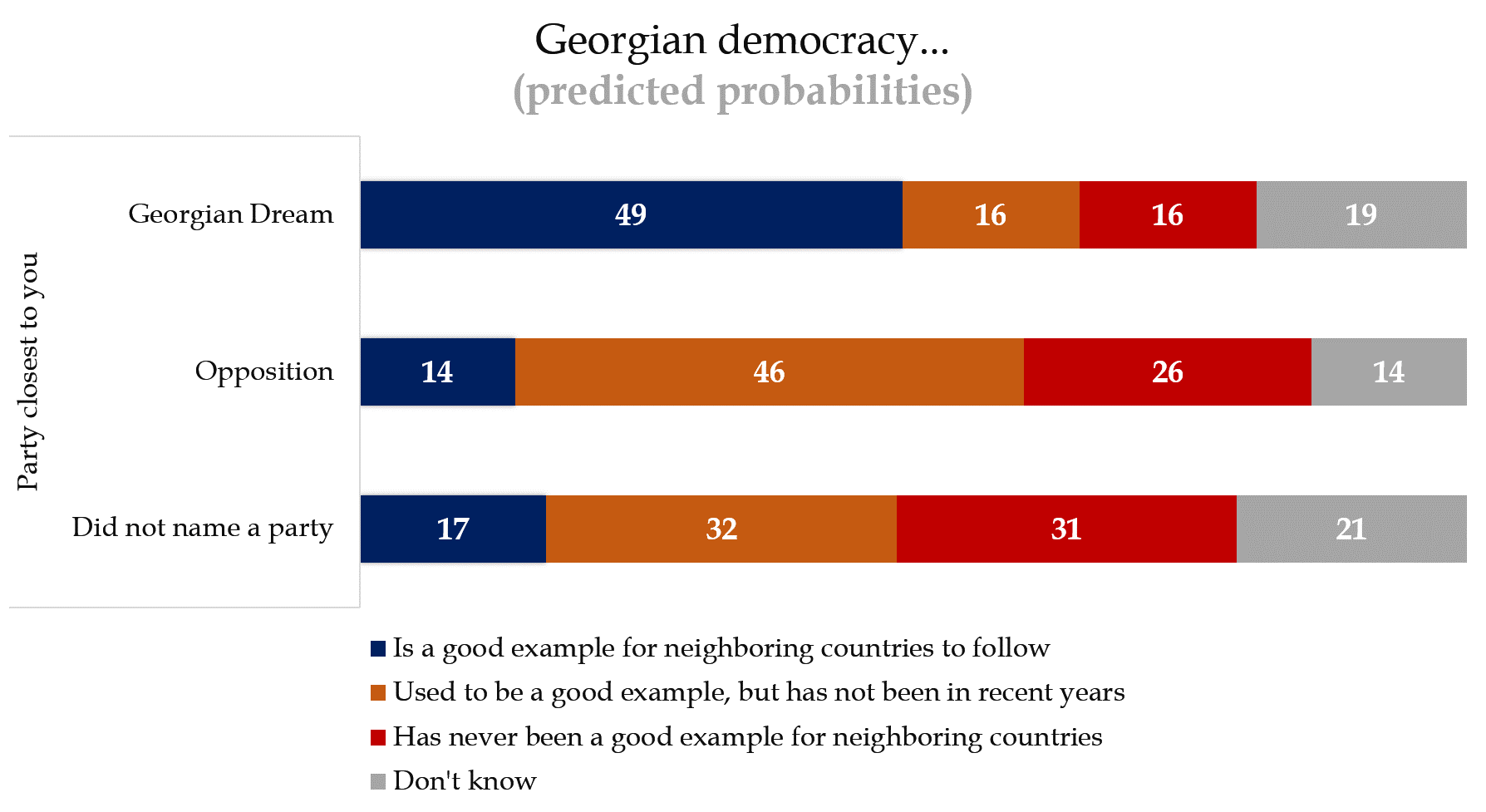 The fact that the share of the public that considers Georgia to be a democracy is at its lowest since 2010 corresponds with the views of Freedom House, The Economist Intelligence Unit, and the Varieties of Democracy index, all of which have commented on Georgia’s democratic backliding.

However, GD supporters, in stark contrast to the rest of the public, tend to believe that Georgia is an exemplary democracy even in 2022.

Note: The above data analysis is based on logistic and multinomial regression models which included the following variables: age group (18-34, 35-54, 55+), sex (male or female), education (completed secondary/lower, technical or incomplete higher education/higher), wealth (an additive index of ownership of 10 different items, a proxy variable), employment status (employed, not employed, other) ethnicity (ethnic Georgian or ethnic minority), and party identification (Georgia Dream, opposition, did not name a particular party).

This article was written by Givi Silagadze, a researcher at CRRC Georgia. The views expressed in this article are the authors’ alone and do not represent the views of NDI, CRRC Georgia, or any related entity.