Despite the introduction of gender quotas, Georgia’s parliament remains an unequal place in terms of gender. However, the data suggests support for more women in politics is rising.

Women have been and are underrepresented in Georgia’s parliament, with only 17% of seats held by women as of March 2021. This is despite the passage of gender quotas in 2020, according to which parties must nominate at least one woman for every four candidates.

The discrepancy stems from a mixture of the mixed electoral system and a lack of requirement to name female candidates for the first past the post or majoritarian component of the elections. The legislation passed in 2020 will slowly increase gender quotas, and assuming parliamentary elections become fully proportional, will increase the requirements to one in three candidates being of the opposite gender by 2028.

In line with legislative changes, CRRC Georgia and NDI’s data suggests that the public has become increasingly supportive of equal representation in parliament for women and men. Notably, support does not vary significantly by partisanship.

From 2014, the CRRC/NDI surveys asked about the best proportion of men and women in parliament. The data show that the share of Georgians who support an equal share of women and men has increased from 32% in 2014 to 49% in February 2021. 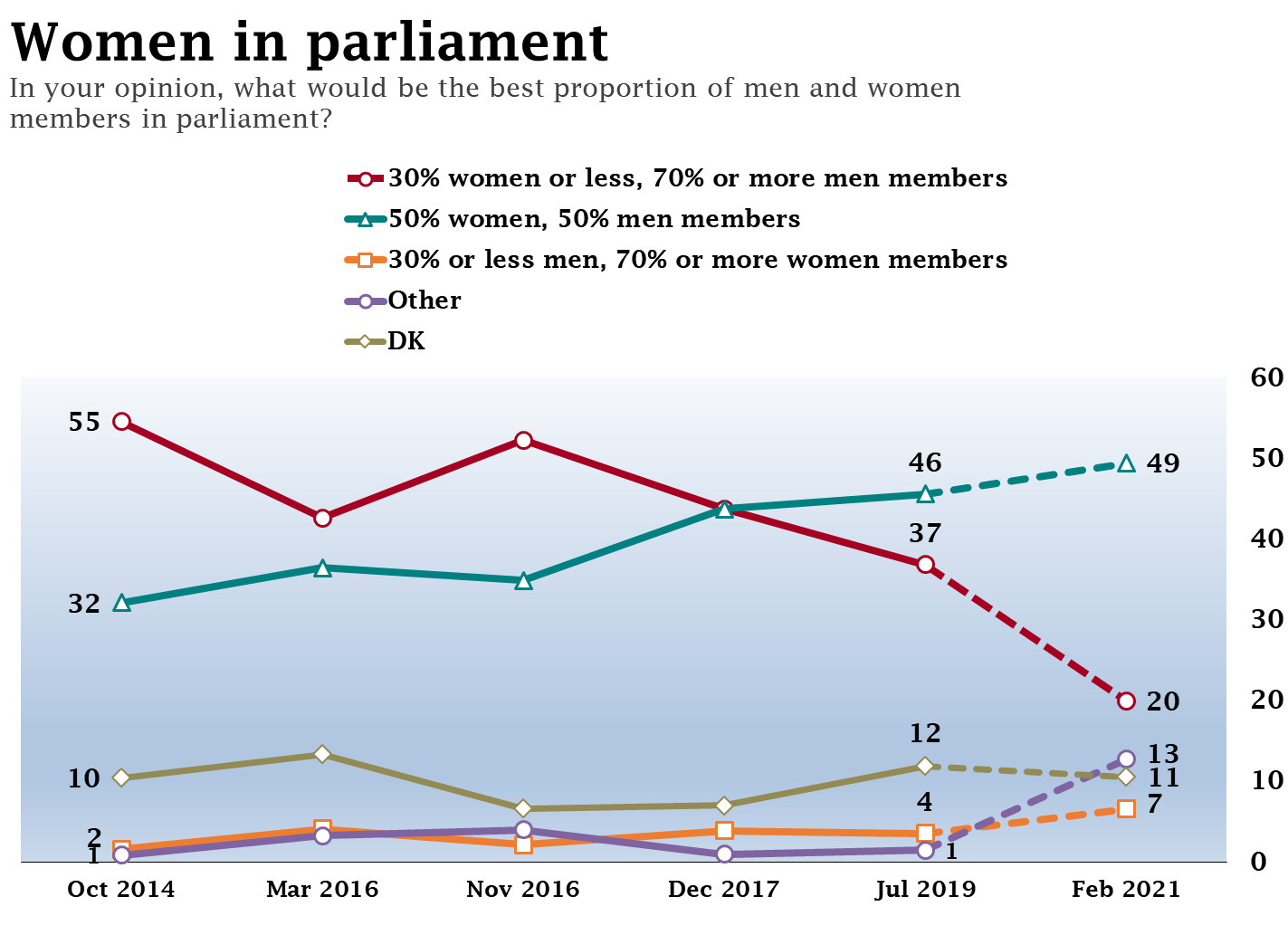 Further analysis suggests women, younger people, and those with a higher education were more likely to support an equal number of men and women in parliament, while older people and men are less likely to do so.

Young people were 9 and 13 percentage points more likely to do so than people 35–54 and 55+, respectively.

People with a higher education were 6 percentage points more likely than people with lower levels of education to support an equal parliament.

Notably, the type of settlement and partisanship were not associated with support for an equal share of men and women in parliament. 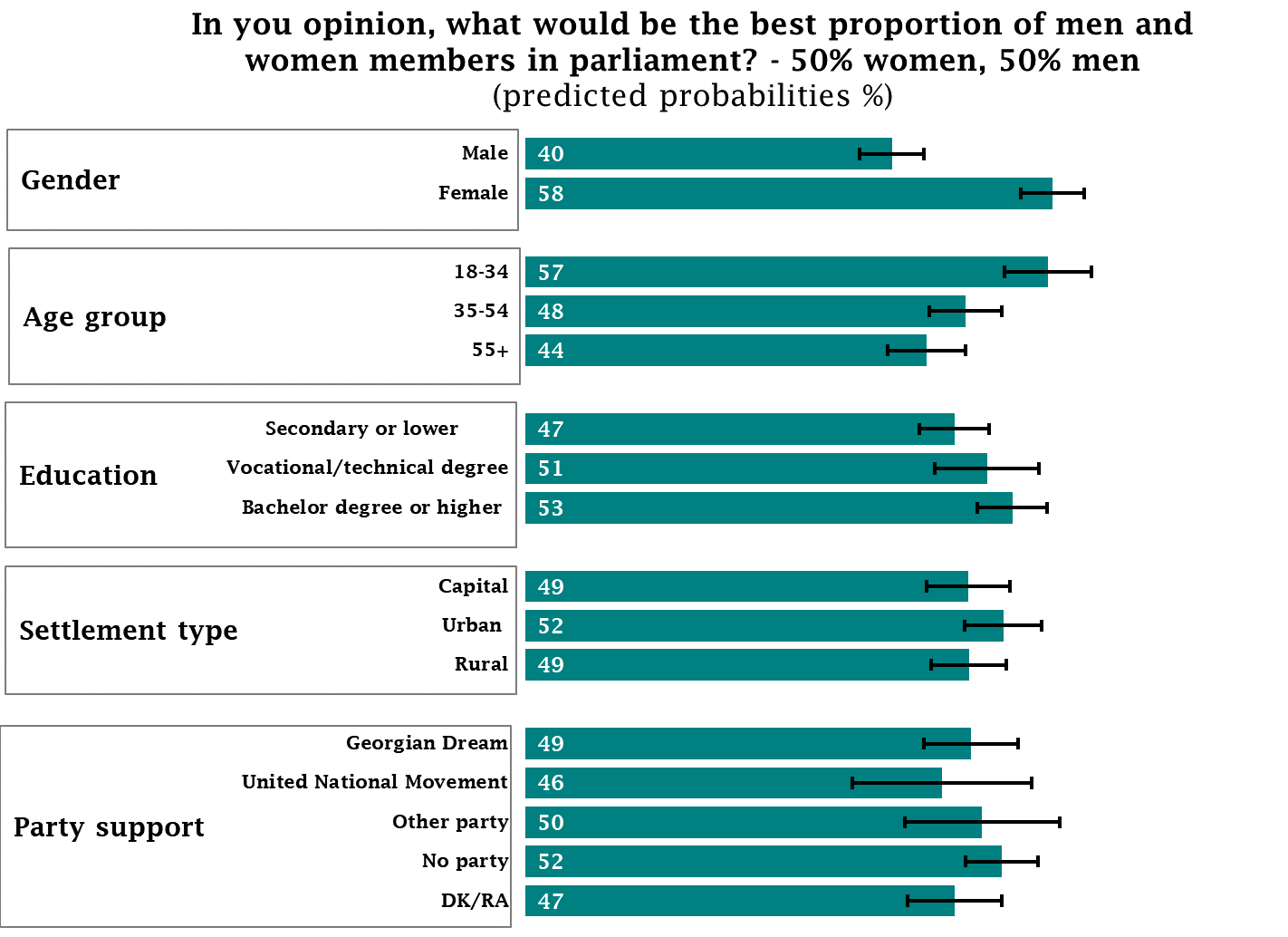 While support for women’s equal participation in politics is on the rise in Georgia, men are less supportive of equality than women, as are older people and those without higher education.

The data does not suggest differences between supporters of different parties, meaning that support for equality is not a partisan issue for most citizens.

The above analysis is based on a logistic regression, where the dependent variable is equal support for male and female members of parliament. The independent variables include gender, age, settlement type, education, and partisanship.

The views presented in this article do not represent the views of the National Democratic Institute, CRRC Georgia, or any related entity. 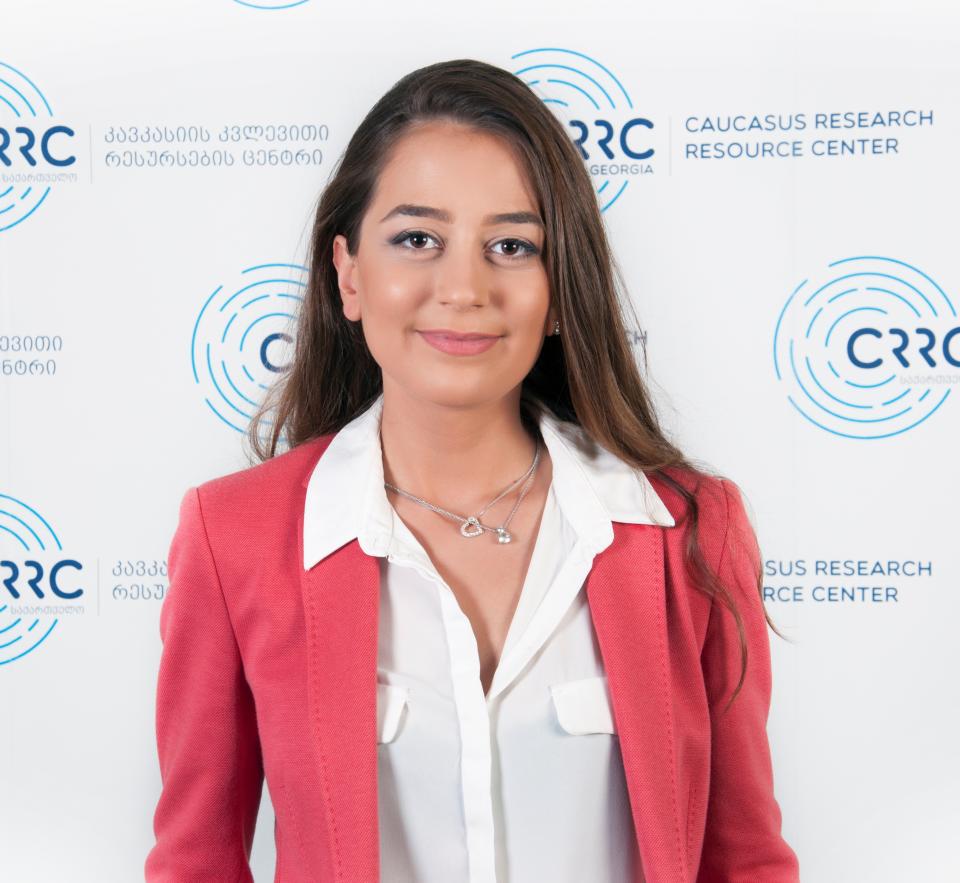 Eto Gagunahvili is a researcher at CRRC Georgia.