An estimated 11,400 people die in Georgia due to tobacco consumption annually. Data from Caucasus Barometer 2019 suggests that efforts to counter smoking should likely focus on men, people in Tbilisi, and poorer individuals.

No one questions whether tobacco consumption is a public health scourge: tobacco is estimated to cause eight million deaths a year worldwide. In Georgia, in 2016, 29% of the 15+ population was estimated to be a smoker, making Georgia 33rd in the world for smoking prevalence at the time among 146 countries for which data was available.

In reality, the gap is likely smaller than this data suggests when it comes to sex. A large majority of the public (80%) think it is never acceptable for a woman to smoke. In this regard, it is reasonable to believe women would not necessarily report that they smoke to an interviewer.

A study by the National Centre for Disease Control (NCDC) suggests that this is in fact the case. In the study, respondents were administered a urine test to check whether they had actually been smoking. It found that 12% of women had traces of tobacco in their body as opposed to the 9% that reported smoking on the survey. While this suggests the gap is likely being smaller than the data suggests, there likely remains a large divide.

Aside from sex, people’s age, settlement type, and household economic situation predict whether or not they smoke. Younger people are less likely to report smoking than people in the 35–54 age range, as are older people. The smaller share of older smokers likely stems from tobacco-related mortality. People in Tbilisi are almost twice as likely to smoke as people in rural areas. Similarly, people are 1.5 times as likely in other urban areas, compared with rural areas, to smoke. The poorest households in Georgia are 3 times as likely to smoke as the best off. 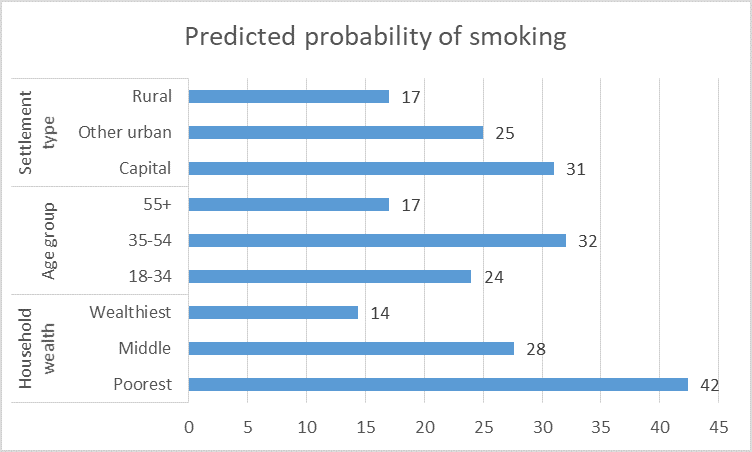 Aside from who smokes, the data also tells us how much smokers smoke. Again sex predicts how much people smoke, as does people’s level of education. Controlling for other factors, female smokers smoke 12 cigarettes a day less than male smokers. People with a higher education smoke 5 cigarettes less per day compared with those with only secondary education or lower.

Although the data from the Caucasus Barometer is promising in that it shows that smoking prevalence has declined over the years, there are still a relatively large number of smokers in Georgia.

The data suggests that anti-smoking campaigns need to target men in particular. Similarly, smoking is most common among poorer households and in Tbilisi, suggesting a need for increased anti-smoking efforts among these populations.

Note: The above data analysis is based on logistic and ordinary least squares regression models which included the following variables: age group (18-35, 35-55, 55+), sex (male or female), education (secondary or lower/vocational/higher), settlement type (capital, urban, rural), wealth (an additive index of ownership of 9 different items, a proxy variable), and employment situation (working or not).

Torture and survival in Chechnya