Despite some recent victories by independent trade unions, recent data shows that youth in Georgia both have low trust and low awareness of unions in the country.

However, due to Georgia’s Soviet heritage and neoliberal policies, among other factors, some argue that unions in Georgia have lost the trust of workers, having been unable to successfully fight for fair working conditions since the 1990s.

Similar to Georgia, in other countries with experiences of Soviet rule, where unions were the instruments of state power during the communist period, they do not enjoy high trust, and workers have only recently started to return to them. And though it was not by any means frequent, several independent unions in Georgia have indeed had successes since the 2010s.

In spite of this small-scale resurgence, recently released data from the Survey on Youth Civic and Political Engagement and Participation in Peacebuilding, which looks at trust in unions, among other institutions, suggests that public trust remains anaemic.

The survey results, which feature data that is representative of Georgia’s youth (aged 18-29), suggest that trust in unions is quite low (10%) compared to trust in other institutions. However, this stems from a high level of uncertainty, rather than active distrust. Two fifths (38%) of young people are uncertain about their level of trust in unions, which may stem from low levels of awareness. 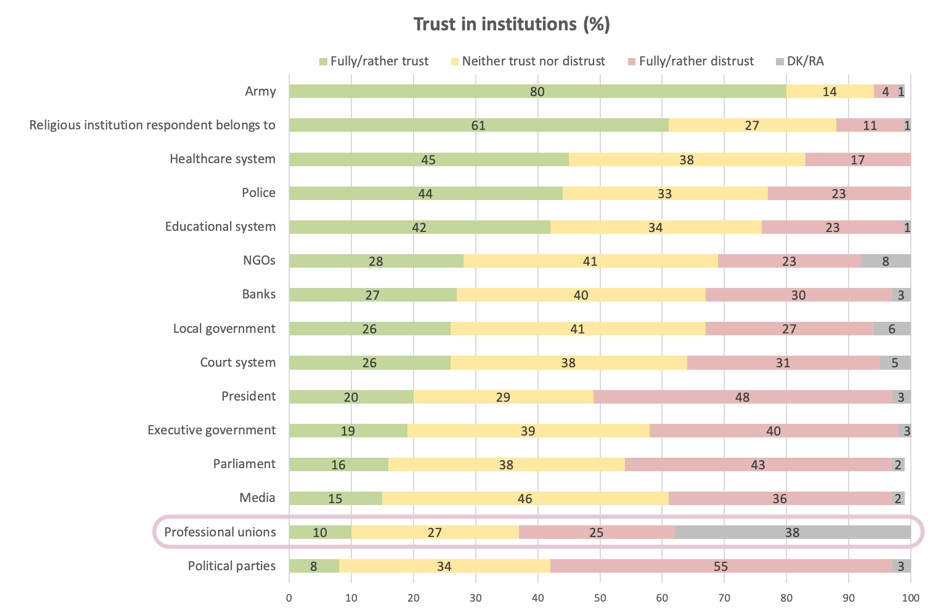 Trust in unions differs across several social and demographic groups. Regression analysis suggests there are no significant differences across gender, age, employment situation, the experience of job loss due to the pandemic, current perceived economic rung, status as an internally displaced person (IDP), or ownership of durable goods. However, trust differs across settlement type, ethnicity, educational attainment, party affiliation, and level of generalised trust.

Ethnic minority youth are significantly and notably more likely to trust and less likely to be undecided about unions (29% and 57%, respectively) compared to ethnic Georgian youth (8% and 65%, respectively). Similarly, ethnic minority youth are significantly more likely to trust other non-state institutions, including political parties, the media, and religious institutions.

Those with higher education are more likely to distrust unions (33%) and less likely to be undecided (55%), compared to those with secondary or lower education (21% and 70%, respectively). This pattern is distinctive to unions, as educational attainment is not associated with trust in other non-state institutions.

Youth with greater degrees of trust in general also express less distrust in unions. However, being neutral or undecided is also more common among youth believing that most people can be trusted (68%), compared to those who believe that one cannot be too careful in dealing with people (56%). This pattern resembles the general pattern for trust in political parties and the media. 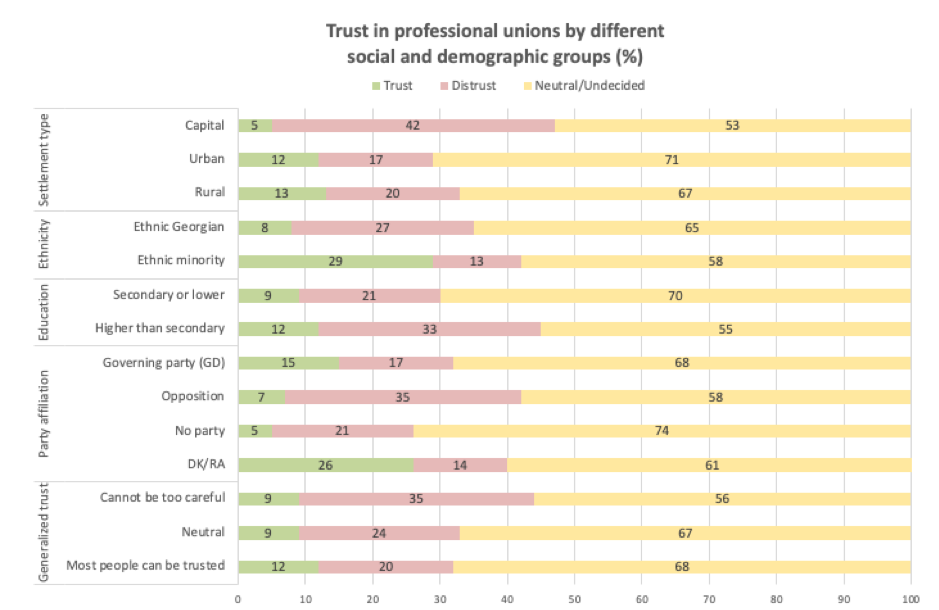 In line with the general trend in the post-Soviet space, young people in Georgia have low levels of trust in unions, although a majority neither trusts nor distrusts them. Rather, a plurality is uncertain of how much they trust unions, potentially indicating a low level of awareness. Trust in unions is lowest in the capital, among ethnic Georgians, those with higher education, and people who trust other people less in general. In contrast, undecidedness is highest among youth living in urban areas, without tertiary education, people who have higher trust in people generally, and among ethnic Georgians.  In general, these demographic breakdowns mirror patterns of trust in institutions more broadly.

Note: The data used in the article can be found on CRRC’s online data analysis tool.

This article was written by Nino Zubashvili, a researcher at CRRC Georgia, and David Sichinava, Research Director at CRRC Georgia. The views expressed in the article are the authors’ alone and do not reflect the views of CRRC Georgia or any related entity.