As the number of fatalities due to the Coronavirus pandemic rises worldwide (over 65,000 as of 5 April, and doubling every 5.5 days), more discussions focus on the different scenarios countries are going to face in the coming weeks and months.

Until now, Georgia’s place in these discussions was limited to local and international praise for its effective handling of the situation with only two fatalities as of 5 April, and moderate increase of cases compared to most European countries.

[Follow our live updates on the coronavirus in the Caucasus.]

At the very least, Georgia has been able to buy itself valuable time to prepare for what is still to come.

Swift action by the authorities and aggressive contact tracing (partly facilitated by the capabilities of the Tbilisi based Lugar Research Centre) seem to have been responsible for the success so far.

However, popular support for social distancing measures will likely become a crucial factor in slowing down the outbreak of the disease as Georgia enters the phase of uncontrolled internal spread.

On 28 March, with 90 registered cases, Amiran Gamkrelidze, Head of the National Centre of Diseases Control and Public Health, confirmed it was ‘highly likely that there might be a precedent of domestic transmission’ after two newly confirmed cases had contracted the virus from apparently unidentifiable sources.

On 2 April, seven employees of the National Bank of Georgia tested positive, with speculation arising about a possible transmission by touching cash.

While the authorities are still trying to trace every case, the growing number of people in quarantine (over 5,000) makes this look like a Sisyphean task. 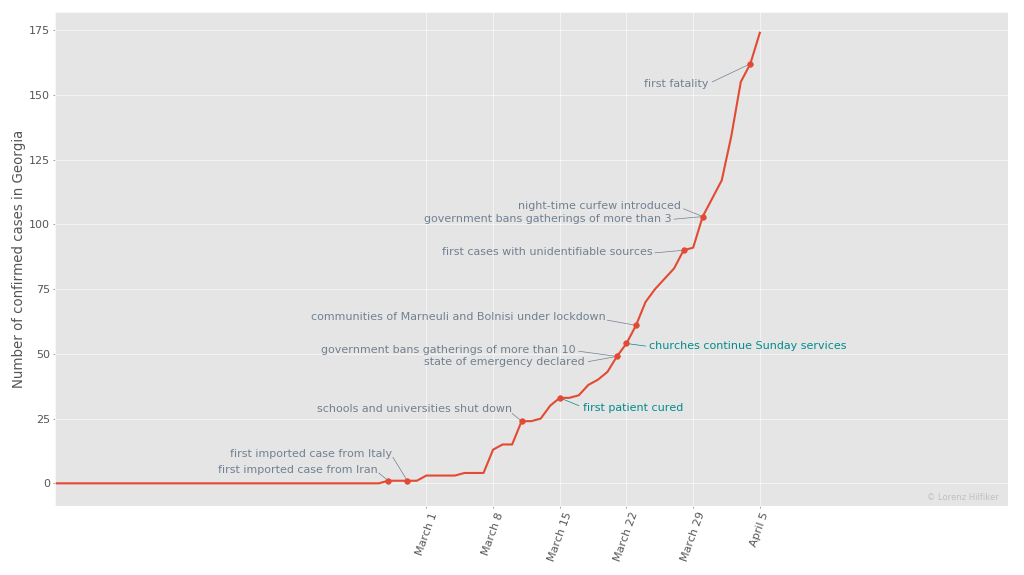 Older people are, on average, more likely to die as a result of COVID-19 than younger people.

According to Gallup, ‘older adults have a harder time resisting infection as the white blood cells needed to identify and eliminate infections decline in number and efficiency. Risk clearly exists among younger adults as well, although at significantly lower levels.’

However, older people anyway face a higher risk of death in any given year than younger age groups.

The model found that adults of all age groups experience roughly the same increase in the risk of death, independently of the chosen scenario.

In a worst-case scenario, adult Georgians of all ages may be about twice as likely to die in 2020 than they would be in a normal year.

The model is based on Georgian demographic data (to determine the risk of death in a normal year) and Chinese case-fatality data for COVID-19 (sample size 44,672).

The model has some flexibility. For example, the average fatality rate for an outbreak in Georgia may differ from the one observed in China due to factors such as differing overall health of the population, the preparedness of the healthcare system, available treatment, etc.

Moreover, the model takes into account the growing consensus that around half of the infections are never registered as such (for example asymptomatic infections) so long as there is a lack of comprehensive testing.

The worst-case scenario assumes a herd immunity approach to handling the pandemic, for which to succeed, up to 60% of the world’s population would need to get the infection.

This strategy aims to slow down, i.e to flatten the curve, rather than outright stop the spread of the virus. In this way, the hope goes, a total collapse of healthcare systems, as well as of the economy, can be averted while the growing number of recovered patients will naturally reduce the power of the virus to spread.

Explaining the approach, the MIT Technology Review says: ‘If the virus keeps spreading, eventually so many people will have been infected and (if they survive) become immune that the outbreak will fizzle out on its own as the germ finds it harder and harder to find a susceptible host.’

In the early days of the European COVID-19 outbreak, herd immunity seemed to have been accepted by some governments (notably the British one) as a possible exit strategy from disaster.

However, this approach immediately came under fire, and it is easy to see why: the death toll of such a scenario could potentially reach dimensions that no democratically elected government can afford to justify.

Let us assume 60% of the Georgian population, 2.2 million people, will have had the virus in a year from now. According to current estimates, almost half of the infections take an asymptomatic course. Of the remaining cases, around 20% (more than 220,000 Georgians) are expected to require hospitalisation, and 5% (over 55,000) will need intensive care – all of it concentrated in a time span of just a few months.

In such a scenario, the Georgian healthcare system would almost certainly be stretched far beyond its limits.

This prompts us to assume an overall fatality rate twice as high as in the Chinese case (where 2.3% of recorded cases died), closer to what countries like Italy, Spain, or France seem to be experiencing at the moment.

Adverse health conditions, such as Georgia’s high level of antibiotics usage and the country having one of the highest numbers of smokers in the world, could contribute to this as well.

It is worth keeping in mind, however, that at such an early stage of the pandemic fatality rates are notoriously hard to project and estimates may well be lowered considerably in the weeks and months to come.

Such a worst-case scenario would lead to a marked mortality increase for adults of any age, as the following figures show.

As can be seen, the average risk of death for all adult age groups increases by about 100% compared to a normal year. Minors have been excluded from these figures since the associated uncertainties for that age group are too large.

If any distinction can be made at all, it would seem that adults in their twenties and sixties experience the highest increase in risk, while adults in their forties and eighties face a more moderate increase.

Given several sources of uncertainty, I would, however, not go as far as to claim that as a fact.

Will the young bear the brunt of the risk?

The important lesson was aptly summarised in a blog post by the Brookings Institution by Katharina Fenz and Homi Kharas:

‘In China, more than 50% of COVID-19 deaths have been people who are over 70 years old even though most COVID-19 cases are being contracted by people below 70. Young people have interpreted this as an indication that they do not need to worry about the virus, while old people are being warned to take extreme caution. It is true that young people have a smaller chance than old people of dying from COVID-19, but they have a smaller chance of dying of almost any other health risk as well.’

This simple fact may have ethical implications for the handling of the Coronavirus pandemic in the medium run.

Once drastic measures succeed at curbing the first wave of the disease, what is the way forward until a vaccine is available? Surely we do not want to uphold the current level of social distancing for over a year?

One proposed solution with a growing number of advocates is to slowly normalise life for people of working age who would then take the brunt of the pandemic, while seniors keep social distancing. While this approach makes sense economically and would indeed reduce overall mortality by a lot (compared to the worst-case scenario), it would also end up exposing the younger generations to a disproportionately increased risk of death when compared to older generations.

In reality, no country or region so far has come close to the catastrophic scenario outlined above. Even in the densely populated city of Wuhan where the novel Coronavirus originated, only about 0.5% of inhabitants are estimated to have had COVID-19 by the end of the outbreak.

If there is no second wave of infections, the Coronavirus could account for as little as 2% of all deaths in Wuhan this year. This is if official government figures can be trusted, and new reports suggest the real number could be closer to 30%.

The worst-case scenario simply reminds us why social distancing measures are deadly serious. In Georgia alone they may help save 50,000 lives in 2020.

The eventual scale of the pandemic in Georgia remains highly unpredictable at this stage. However, no matter the eventual death toll, any increase in mortality will likely affect all age groups similarly, unless one age group is being shielded from the virus much more than others.

A version of this article first appeared on 1 April 2020 on covidingeorgia.com. See here for more details on the methodology used and here for the calculations and source code.

Lorenz is a Tbilisi-based blogger with a PhD in mathematical physics. He is the author of covidingeorgia.com, a blog using data to track the development of COVID-19 in Georgia.