The recent war in Nagorno-Karabakh resulted in thousands of deaths and the displacement of tens of thousands. Yet despite there being a brutal war near its borders, many in Georgia were unaware of the conflict.

Data from the Caucasus Barometer survey indicate that awareness of the conflict’s existence increased shortly after the war in 2020 compared to 2013, but only slightly. In 2013, when the Nagorno-Karabakh conflict was ‘frozen’, 66% of Georgians reported they had heard of it. Around a third of the population was not aware of it. In December of 2020, shortly after the 44-day long war, 74% of Georgians reported they had heard of it.  A whole quarter (26%) of the population, meanwhile, was not aware of military operations between the country’s two direct neighbours.

A regression model suggests that some groups in Georgian society were more likely to be aware of the conflict than others. Considering Georgia has a large population of ethnic Armenians and Azerbaijanis, among others, it does not come as a surprise that ethnic minorities are 18 percentage points more likely than ethnic Georgians to be aware of the conflict between Armenia and Azerbaijan, all else being equal.

Controlling for other factors, men were 13 percentage points more likely to have heard about the war compared to women.

Access to information is presumably also associated with awareness. Those living in Tbilisi, where access to information is better, were significantly more likely to be aware of the conflict compared to people in other cities and settlements, while no notable differences are found between those living in other cities and rural areas. Similarly, people with higher education were more likely to be aware of the conflict than those with secondary or lower education. Regular internet users were six percentage points more likely to have heard of the conflict, all else equal, compared to irregular users. 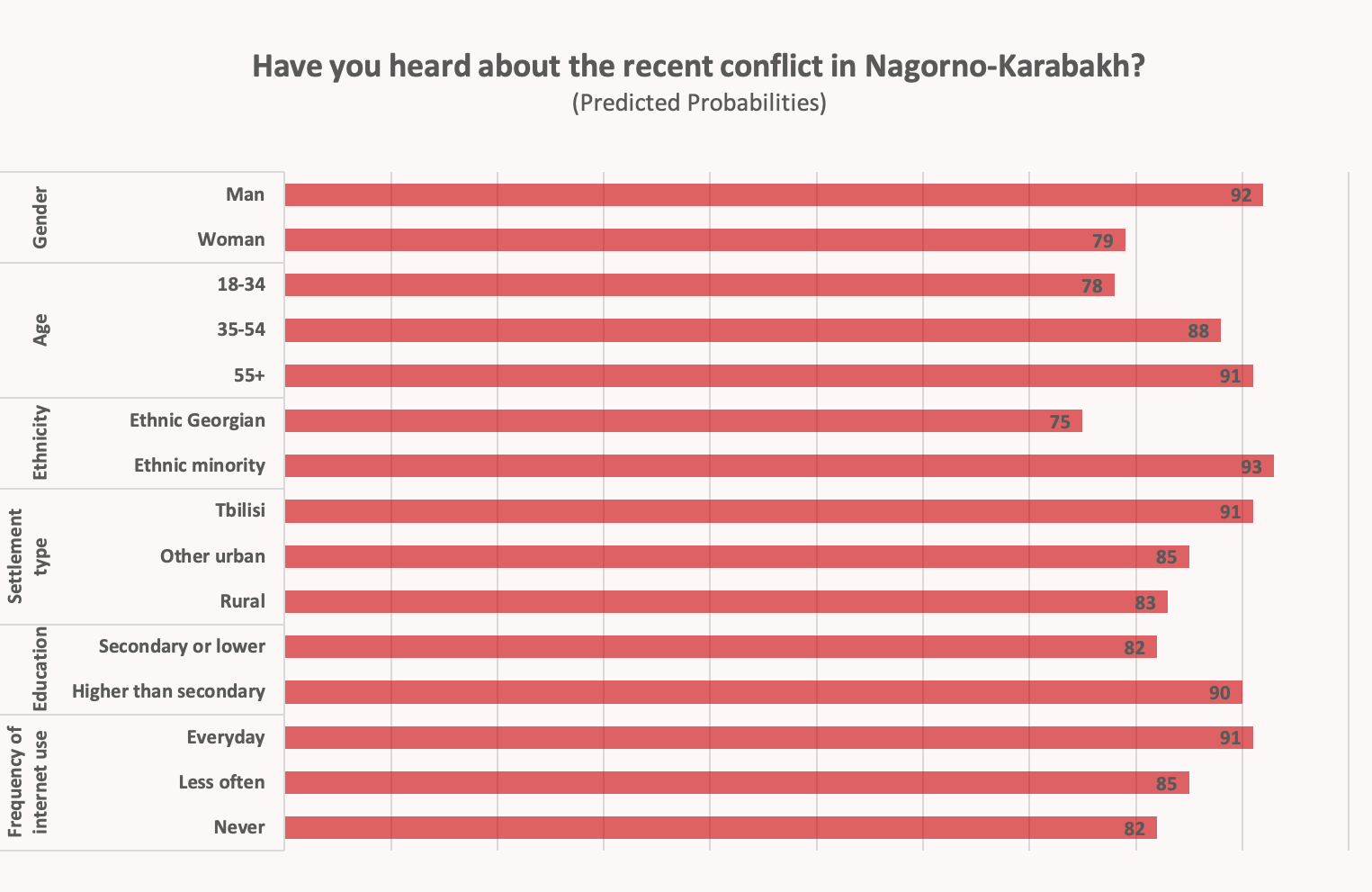 Employment status, being displaced due to previous conflicts in the region, and general trust in the media were also analysed, but do not show statistically significant differences.

Despite a war raging near its borders, a quarter of the Georgian public was unaware of it. An indirect link of awareness with access to information appears to be present in the data and a number of other variables were also significant predictors of awareness, but the reasons behind their significance require further research.

The data used in the article can be found on CRRC’s online data analysis tool. The views expressed in the article are the author’s alone and do not reflect the views of CRRC Georgia, or any related entity. The analysis of which groups were aware or not aware of the war was carried out using logistic regression. The regression included the following variables: sex (male or female), age group (18–35, 35–55, 55+), ethnic group (ethnic Georgian or other ethnicity), settlement type (capital, other urban, rural), educational attainment (secondary or lower education, or higher than secondary education), employment situation (working or not), IDP status (forced to move due to conflicts since 1989 or not), frequency of internet use (every day, less often, never), trust in media (distrust, neither trust nor distrust, trust).

The views expressed in the article are the author’s alone and do not reflect the views of CRRC Georgia or any related entity.