Television is the primary source of information for most in Georgia, and it has been for at least the last decade. Yet, as internet penetration expands in Georgia, so too has the share of people using the internet as their primary source of information, and data from CRRC Georgia’s 2020 Caucasus Barometer survey suggests that many people have simply stopped watching TV.

The 2020 Caucasus Barometer survey asked respondents which TV station they trusted most. In response to the question, nearly one in five (19%) reported that they do not watch TV.

To understand who does not watch TV in Georgia, a regression controlling for people’s age, sex, ethnicity, the settlement type they live in, education level, employment status, number of adults in the household, whether or not the household had children, whether the respondent was internally displaced, and the household’s economic status was run. 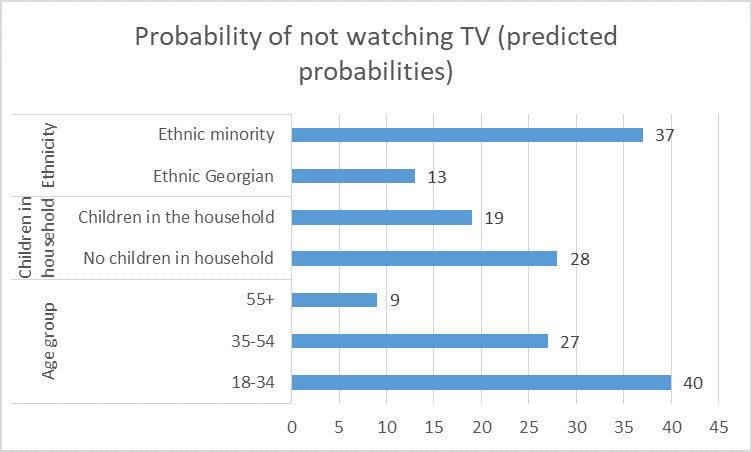 The data indicates that most people not watching TV use the internet. People who report not watching TV report using the internet every day at a rate higher than people who report watching TV (83% versus 59%). This difference holds up when controlling for other factors, though the difference declines to six percentage points, suggesting that demographics (including,  age, sex, ethnicity, settlement type, education level, employment status, number of adults in the household, children in a household, internal displacement status, and economic condition) explain much of this.

In short, almost one in five Georgians report that they do not watch TV, with young people and ethnic minorities being significantly less likely to watch TV and the data appears to indicate that Georgians are replacing TV with the internet for information.

Note: The data used in this article are available here.

This article was written by Dustin Gilbreath, Deputy Research Director at CRRC Georgia. The views presented in the article do not represent the views of CRRC Georgia or any related entity.