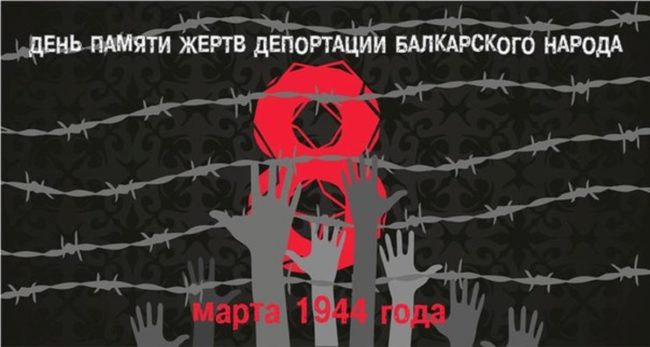 The event was attended by over 1,000 people, including ordinary residents and government officials. Balkar elders shared memories of how they managed to survive these tragic days. Many speakers noted with regret that Stalin’s cult in Russia is on the rise, while it was on his orders that many peoples were deported from their ancestral lands in 1944. They argued that it was unacceptable for a multinational country and was fraught with danger.

Following the official part of the ceremony, many Balkar families held private commemoration ceremonies in their houses. Sacrificial meat was distributed to orphans and low-income families.

President of Kabardino-Balkaria, Yury Kokov, said in his speech that the Balkar people, despite all their hardships, have found the strength to be ‘reborn’.

‘The hardships and tribulations during the 13-year-long exile didn’t break the Balkar people. They survived it, retained their spiritual potential, their creative spirit, and returned to their native land, actively rebuilding their lives. The past six decades have been marked by high achievements in terms of economic, social, and cultural development’, Kokov said.

During the deportation, thousands of Balkars fighting against Nazi Germany were removed from the front lines and sent to join their exiled families in Kazakhstan.

‘I was terribly worried, not receiving any news from my homeland. My letters remained unanswered. I wrote to a national theatre where I worked before the war. I waited for the answer for a long time, and finally received a letter from Kabardian actor Ali Tukhuzhev. He wrote that all Balkars had been deported to Central Asia, and Kabardians were expecting the same fate. This message was a horrible blow to me. I still can’t fathom how Stalin, whose name I had on my lips while fighting in the war, could commit such an atrocity’, eyewitness Magomed Kuchukov recalls.

During the 18-day journey from Kabardino-Balkaria to Central Asia, 562 people died of disease and other causes. Those who survived the journey ended up living in fenced and heavily guarded places. Balkars spent 13 years living in prison-like conditions.

Between 1 April 1944 and September 1946 alone, 4,849 Balkars died in Kazakhstan and Kyrgyzstan — one in eight deportees. Historians estimate that in total, about 38,000 people were deported.