A majority of Georgians believe that the Georgian Government used excessive force to disperse protesters at a 20 June demonstration outside parliament, a new poll from the National Democratic Institute (NDI) has found.

The survey, which was conducted by CRRC, found that the vast majority of Georgians,  92%, were aware of the aftermath of Russian MP Sergey Gavrilov’s visit to Parliament. 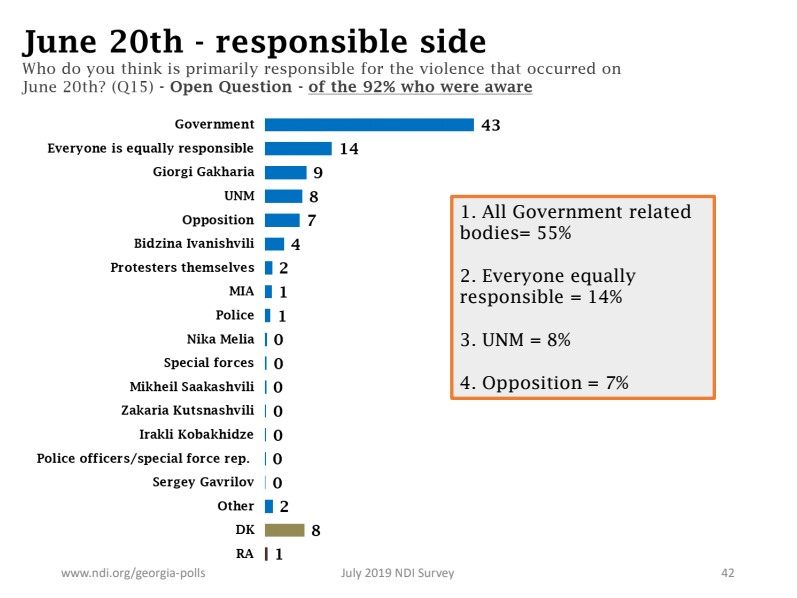 According to a press release from NDI, the results of the survey ‘reflect data collected from July 13–29, 2019, through face-to-face interviews with a nationwide representative sample of Georgia’s adult population, excluding occupied territories, that included 2,131 completed interviews. The average margin of error is +/- 1.7 per cent’.

Only 46% of the 92% of the population that was aware of the dispersal agreed with protesters’ demand that then-Interior Minister Giorgi Gakharia should have resigned, in contrast to 39% who disagreed.

Only 68% were aware that Georgian Dream agreed to the protesters’ demand of holding the 2020 Parliamentary elections under a proportional system, with 85% of those that were approving of the move.

Overall, 59% of people surveyed deemed the government’s response to the 20 June events and following protests negatively.

NDI found a strong correlation between the public’s growing negative perception of the country’s direction and the fall in the value of the Georgian Lari compared with the US Dollar.

Of the respondents, 63% reported that last month their household income was ₾800 ($270) or below, with only 20% reporting it was higher.

The rate of joblessness reported by respondents was also significant, with 61% of respondents describing themselves as unemployed. This is in stark contrast with official unemployment figures, which cite Georgia’s unemployment rate as 12.7%.

Respondents from settlements with majority ethnic minority populations reported higher rates of unemployment (78%), as did women (68%) compared to men (54%).

A majority of respondents (51%) also said that in the last 6 months, there had been at least one occasion in which they did not have enough money to pay their utility bills.

When asked if they supported imposing a mandatory gender quota in parliament, 65% of respondents replied affirmatively,  with only 24% in opposition.

The overwhelming majority of respondents (92%) said that protecting the rights of people with disabilities was important, 72% said the same of ethnic minorities and slightly less (71%) for religious minorities.

In contrast, only 27% of respondents said that protecting the rights of queer people was important, with 20% reporting a neutral stance and 44% replying that this was not important. The number of people supporting queer rights increased from a similar poll from NDI released in July 2015, in which 22% said it was important to protect queer people’s rights and 49% said it was not. 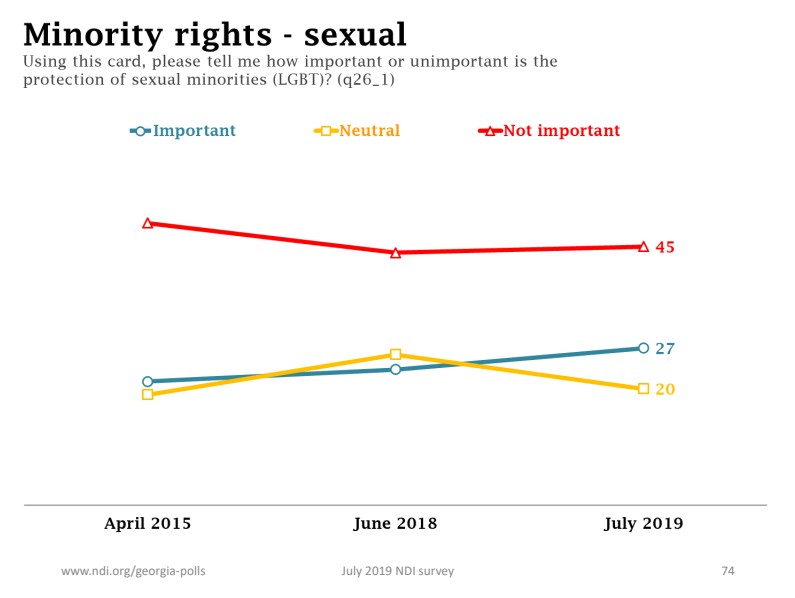 The majority of respondents reported dissatisfaction with the Georgian government, with 60% rating the current government’s performance negatively. A little under a third (32%) gave the government a positive assessment, while 6% reported that they did not know.

Tbilisi Mayor Kakha Kaladze topped the list of well-liked leaders in the country, with 45% of Tbilisi-based respondents giving him a positive assessment. In contrast, President Salome Zurabishvili’s performance was assessed negatively by 40%, with only 12% stating that she had performed well and 36% rating her performance as average.

The  Georgian Orthodox Church remained the most popular institution in the country with 64% of respondents approving its performance, followed in popularity by the Public Service Halls (57%), the Georgian Army (53%), and the Georgian Police (42%).

A small minority of respondents had a positive assessment of the parliament, with only 8% stating that the Georgian legislature performed well.

The poll found that Georgians were largely (57%) undecided on which party they would support if there were elections tomorrow.

Support for EU and NATO membership remained high, on 78% and 71% respectively.

Forty-one per cent said that the dissolution of the USSR was a bad thing for Georgia, with 49% thinking otherwise and 10% reporting they were unsure.