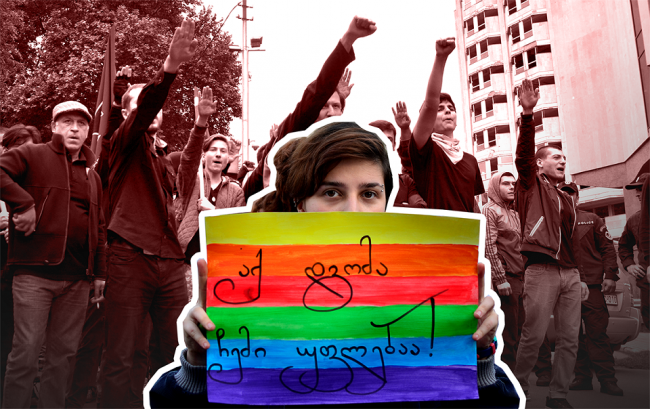 The authorities’ failure to confront homophobia in Georgian society has perpetuated hate, violence, and emboldened the far right. If the government is truly serious about democracy, human rights, and the rule of law, they must dare to pursue policies based on equality, no matter the political cost.

When there are international organisations present in the room, Georgian politicians turn more Catholic than the Pope. That was the case on 2 September when parliament’s Human Rights Committee head Sopo Kiladze presented their 2017–2020 action plan according to which the Committee would mark annually International Day Against Homophobia, Transphobia, and Biphobia.

Kiladze seemed eager to talk about equality that day — in front of representatives of the EU and UN — but her enthusiasm was short-lived. ‘We will not mark the day, it’s up to us to decide,’ she declared laconically eight months later, giving no further explanation as to why.

Her actions had direct consequences on 17 May, when a 15-year-old boy sneaked into the queer rights demonstration and punched activist Nika Gorgiladze repeatedly in the face as he gave a speech about love — egged-on by far-right protesters raving on the other side of the police line.

This 15-year-old boy is another victim of Kiladze’s policy. Had her previous promises not been just a smokescreen for international society, had the Georgian Dream’s rule truly been faithful to democracy, human rights, and rule of law, this 15-year-old boy would not have dared to do what he did, in fear that he would be punished for his actions.

Kiladze and other decision-makers who neglect minority rights legitimise violence. They don’t only neglect it — they propagate hatred by making homophobic statements themselves.

Meanwhile, queer people fall victim to queerphobic violence every day. Young queer people face violence from their parents, friends, and society. Alienated and without a support group, some, especially transgender people, are often left with no other choice but to engage in prostitution. Their future is ruined because politicians would rather make electoral gains with populist initiatives than to stand by those who need their protection. Officials fail to see these people — on purpose.

Far-right groups have never been as strong in Georgia as they are today. They roam the streets preaching hatred and violence, threatening everyone who does not share their ‘Christian’ views. Officials have not responded adequately to their calls to violence, calls which are a criminal offence. The police provided strong protection to queer rights activists on 17 May, but officials do little to prevent the need for such protection. This could be achieved by holding responsible those who propagate violence.

Queer rights activists felt they had no choice but to cancel a major rally planned for 17 May, and this fact alone is a major failure on the part of the authorities. Although they were promised the police would protect them — and in the end they did when a handful of activists still organised much smaller spontaneous events — the fact remains that queer people did not feel safe enough to gather in public as hundreds were ready to attack them.

The government also used queer rights instrumentally to push through controversial constitutional amendments by including in them a ban on same-sex marriage — something that has never been campaigned for by activists and has never been legal in Georgia anyway. Such a populist move has only played into the far right’s hands, at the expense of queer people.

Officials refuse to admit the ban has intensified homophobia, but it did, by propagating the notion that queer people were demanding marriage equality. They have repeatedly tried to downplay queer rights not to anger the powerful Orthodox Church which perpetuates homophobic rhetoric in public discourse. The violence on 17 May 2013 is a good example of this.

Instead of punishing the criminals who attacked queer activists that day, officials applauded the Patriarch’s decision to mark 17 May as ‘Family Purity Day’, which was invented to keep queer people off the streets. Since 2014, Family Purity Day has been revitalising homophobic discussions and planting fear in the queer community. By not prosecuting homophobic crime, the state has given a green light to it.

Georgia is aspiring to become a member of the EU. Because of this, Georgian officials could not avoid making ‘uncomfortable’ decisions, such as adopting the anti-discrimination legislation. Despite strong resistance from the Church, the law was adopted under the Visa Liberalisation Action Plan obligations. The enforcement of this law is poor, proving the point that the government does not consider minorities important.

Politicians claim to be countering Russian propaganda in Georgia, but at the same time, they embrace the kind of homophobic narrative that Russian politicians use — marginalising queer people in the name of Christianity and ‘traditions’ for political gain. Their populist actions and statements have compounded on each other over the years and international society is also to blame for this. Georgia’s Western partners need to be more critical of the Georgian government, something they are vulnerable to. Had there been more criticism, decision-makers would have thought twice before enshrining heterosexual marriage in the constitution.

Sopo Kiladze avoids speaking about minority rights. More than 40 NGOs have called for her resignation. As long as she chairs the Human Rights Committee, queer people have little hope that their lives will get any easier.

She often reiterates that all people are equal, but she still has to prove these are not empty words. Officials need to tackle homophobia and the first step is to start raising this issue publicly. They have to make queer people feel safe by making them believe they are as important as any other citizen. They need to let queer children know they’re not alone and that hate and abuse against them will not be tolerated.

Queer rights should not be used for populist reasons, as much as religion and traditions should not be used as a cover for hate. For things to change, the government must take the lead and step up its game by daring to pursue policies based on equality, no matter how controversial they may now seem.