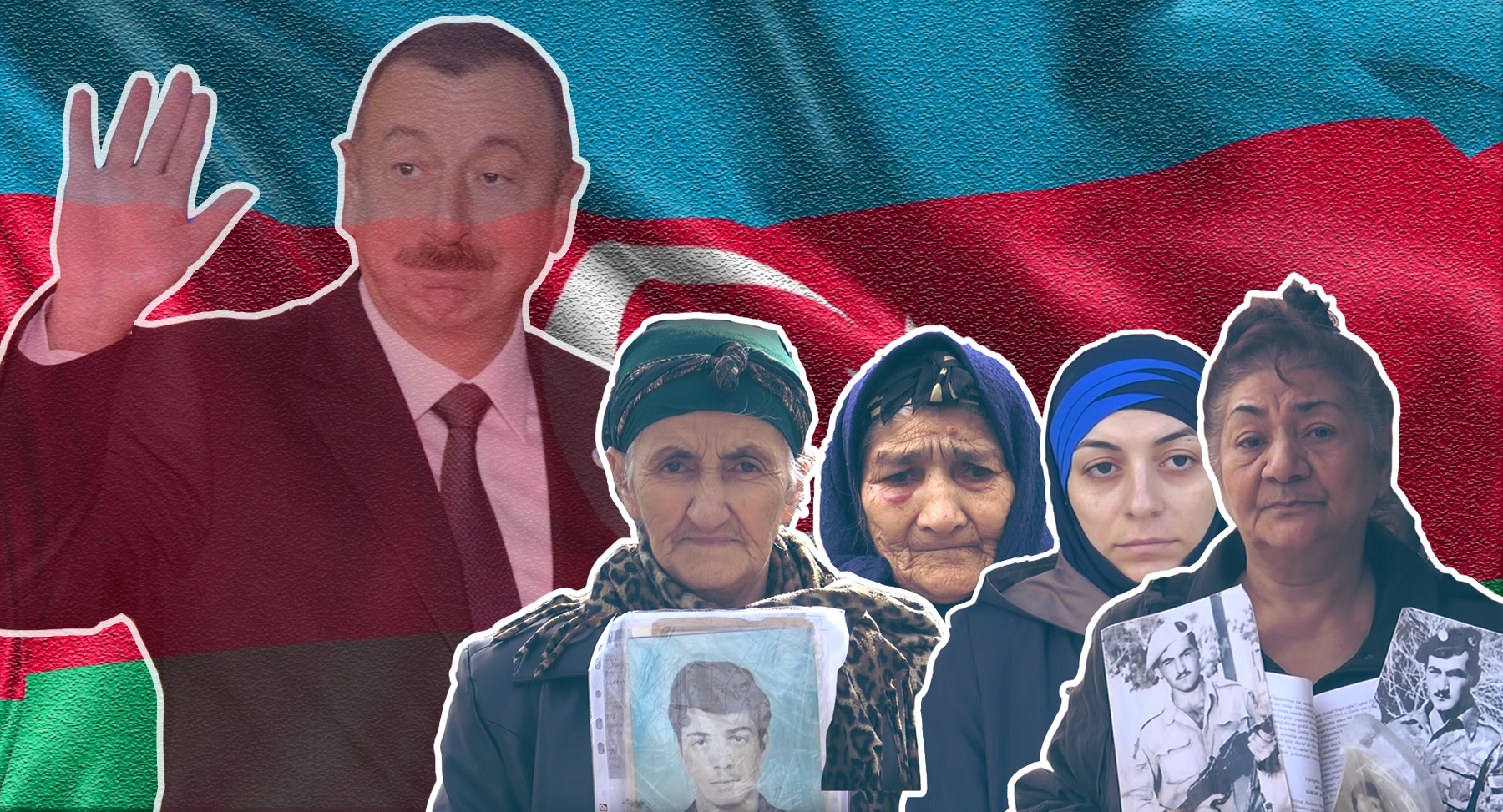 After protests and pleas from the families of those killed in the Nagorno-Karabakh war, Azerbaijani President Ilham Aliyev agreed to pay them the compensation they had been promised. But this U-turn by the government and other small public concessions are only cosmetic changes to a country filled with injustice.

It took almost four months of protests and demands for President Ilham Aliyev to finally meet the ‘mothers of martyrs’ and make an amendment to a decree he signed after securing his fourth presidential term in April 2018’s election.

The decree called for one-time compensation pay-outs of ₼11,000 ($6,500) to families of those who died or went missing before 2 August 1997 during the Nagorno-Karabakh war. The decree was to extend the compensation to some 10,000 families.

After payments began in October 2018, some families reported they were refused payment on the grounds that they already received their compensation at the time of their family member’s death.

Frustrated, these families decided to claim their rights to qan pulu (blood money) by protesting in front of government buildings.

The evidence of such payments and exchanges taking place were missing, as according to the families and officials, the records were long destroyed. According to the law on Archives in Azerbaijan, banks are allowed to keep bank receipts up to five years, after that they are destroyed.

As a result, the question many families were asking was: If the documents are destroyed, how did the authorities know which of the families had received compensation and which had not? Who got to decide which names ended up on the list?

Similarly, when the families were advised to seek a remedy through the courts, they were puzzled — not only would it take years to get a decision, but even if they were able to, in the absence of the archives, lacking any records, and without any proof in the hands of the families, the chance the courts would decide in their favour was zero.

The humiliation these families had to endure over the course of their months-long struggle is paramount. In much of the coverage of their pleas, women cried, often reliving the loss.

‘They are stepping on our honour and dignity’, a daughter who lost her father in the war when she was only three-years-old said.

‘We are not beggars. And our loved ones didn’t sacrifice their lives so that we could make money off of them. All we want is what is rightfully ours’, said another man, who lost his brother, a police officer, during the war, leaving behind a family.

Desperate, another woman said, ‘if they can’t pay, and if they pocketed the money, then return my father to me’.

Little did they know, it would take months of demanding their rights, months of humiliation at the hands of MPs and other officials, and months of being redirected from one government office to another before their desperate pleas would be heard by the president himself.

One MP, Hadi Rajabli, told women outside parliament ‘not to stain’ the President’s reputation, and his good intention, which backfired.

‘We are not staining anything’, yelled the women. ‘It is the civil servants who are’.

Rajabli, as well as other MPs who spoke with the families, had little else to say, only that the decree was not in their mandate but that they would raise the issue in parliament.

But over the coming months, nothing changed. A commission set up by the Speaker of Parliament, Ogtay Asadov, in October made little if any progress in its supposed investigations into the matter. Eventually, however, someone did hear.

Addressing the families on 28 January, President Aliyev welcomed the families and their representatives to the presidential palace, together with his wife, Vice President Mehriban Aliyeva.

In his remarks, Aliyev talked about the care the authorities had shown to those who suffered as a result of the conflict. Not surprisingly, he said that after securing another presidential term in the early election, while he could have signed a decree on any other matter, he chose to focus on government support to the families of martyrs, which he said was indicative of his commitment and care for these families.

‘I thought the first decree I sign [after re-election] should concern families whose members were killed during the war. According to that decree, some 10,000 families would receive one-time compensation of ₼11,000. I would like to once again repeat that although I am not comparing Azerbaijan to any other country, it is no doubt true that Azerbaijan leads in this regard’.

Aliyev then added that in order to meet the requests of families who were not originally included on the list, there would be an amendment adding 2,725 new names, because, he said, Azerbaijan is a country where law and justice always prevail, especially when it comes to social justice.

‘Those who have received compensation in the ‘90s should not be on the list. This is what the law demands. On the other hand, we must resolve all of the issues justly, and approach issues from the point of view of social justice. Taking this into account, I have signed a new decree. The new list includes families who already received one-time compensation, and also the family members of those employed by the Ministry of Internal Affairs [the police]. Their numbers are over 460’, explained the president.

Only the President can help us

What was striking, when observing the events unfold over the past few months, was the confidence these families had in the president to resolve the matter. Each time the family members gathered in front of government buildings, it was the president they asked to ensure that others do their jobs right. It was always the officials who were to blame, whether for corruption or their disinterest in helping them. The president would know what to do was the general attitude.

Perhaps he does. Or maybe, it is fear of unrest that is keeping the authorities, including the president, more alert.

On 13 February, the president spoke to local media for the first time, in an interview with Mirshahin Aghayev.

Aghayev, a journalist and founder of once most popular broadcasters in Azerbaijan, the Azerbaijan News Service (ANS) was in the past known for his unbiased reporting but the challenging political environment in Azerbaijan left him with some difficult choices to make.

In 2016, desperate, Aghayev went as far as writing a letter to late president Heydar Aliyev seeking the protection of ANS after the National Radio and Television Council decided to scrap its license. Aghayev although having lost one platform started another one — Real TV. It was Real TV that spoke with President Ilham Aliyev on February 13.

President Ilham Aliyev’s interview with Real TV on February 13 prompted much humour among other Azerbaijani journalists, many of who found the whole process rather choreographed. Some shared the questions they would have asked had they been given the opportunity to interview the president.

After a successful demonstration in January, the Azerbaijani opposition is intent on continuing their calls for equality, fairness, and justice in a rally scheduled for 23 February. According to the opposition, some 7,000 peaceful protesters showed up to the rally, demanding the release of political prisoners, including jailed blogger Mehman Huseynov, who was handed new charges in December 2018 which were dropped following mounting international and local pressure.

[Read on OC Media: Charges dropped against Huseynov after thousands rally in Baku]

But in a country where appearances play a key role, these changes are nothing but cosmetic. The minimum wage remains low — and is barely enough for basic sustenance. The scholarship rise at best covers transportation costs, especially if you factor in rent costs for housing. And members of the opposition are continually harassed, questioned by police, given administrative detention, and prosecuted on bogus charges.

On 19 February, prosecutors asked for a total of 23 years and 6 months imprisonment for five members of Azerbaijani opposition party the Popular Front.