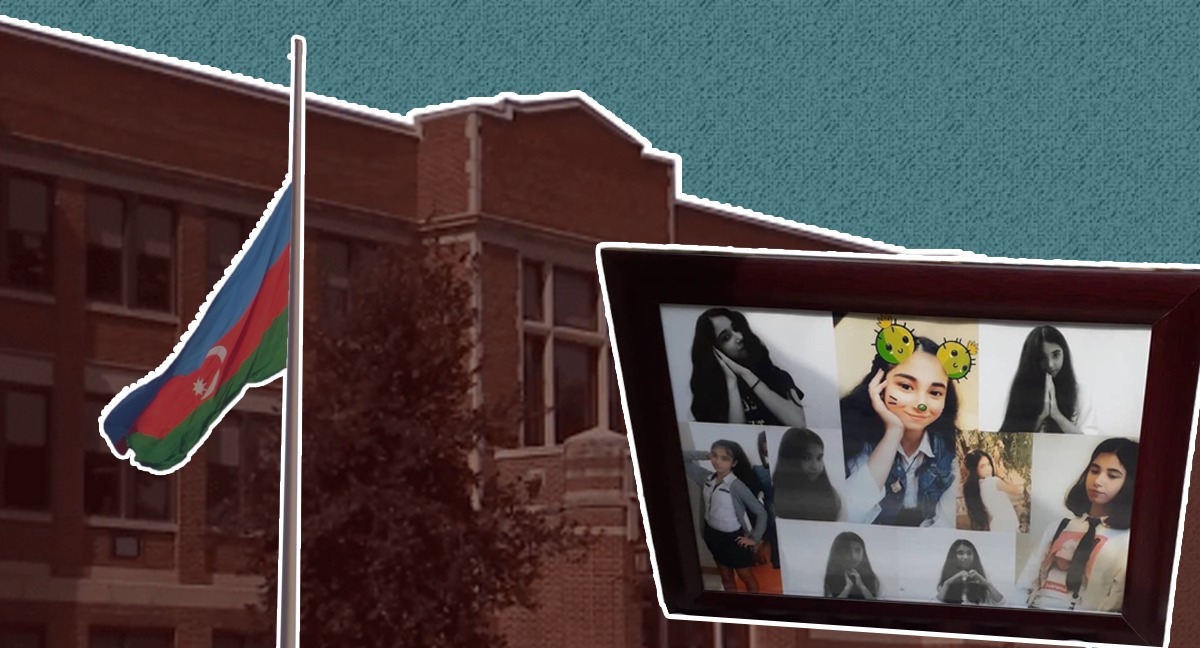 The suicide of 14-year-old Elina Hajiyeva has raised an issue long present but little talked about in Azerbaijani society — bullying. While outrage at the school and the government’s handling of her death has led to a criminal investigation, it is yet to be seen if real changes will be made to tackle the roots of the problem.

There is an old Soviet drama film called Scarecrow (Chuchelo) that tells the story of a young girl, Lena, and the trauma of bullying she endures at her school. Set in a provincial town in Russia, the film centres around a 12-year-old protagonist who struggles to adjust to her new school.

Nicknamed scarecrow by her classmates, the protagonist is subject to aggression from her peers. When she falsely takes the blame for something she didn’t do to protect a classmate with whom she is in love, she is branded a traitor and the bullying intensifies. The film ends with Lena’s classmates realising their mistake and apologising to her.

Unlike, Lena, the protagonist of this story has no moment of vindication, she does not survive. On 4 April, 14-year-old Elina Hajiyeva attempted suicide for the second time. The bullying at her school by her peers and teachers had gotten to her. She had asked her parents to switch schools, but the school she wanted to go to refused to accept her.

Though her best friend and her parents had complained to the school headteacher about the bullying Elina faced, no one took any action. That day, on 4 April, during her second break, Elina opened the window in the hallway of the third floor of her school and jumped. A security camera caught her classmates watching her climb to the window; they only ran towards her after she had jumped.

[Read more on the story: Teen attacked in Baku for commemorating bullied schoolgirl]

Elina might still be alive today had headteacher Sevinc Abbasova not waited to call an ambulance. According to accounts from Elina’s friends, the headteacher asked the school cleaner to clean the blood stains from the ground and moved the girl to her office, where Elina, half-conscious, was forced to answer questions and explain why she had jumped.

‘Just tell me what you want, we will do it for you?!’ asked a woman later identified as Khalida Bagirova, the deputy chief of the Sabayil District Executive Power. ‘I only want to switch to school number 203’, responded Elina, twisting from the pain and shock of what just happened. ‘Do you want that?’ asked the woman again. ‘Yes, I do’, said Elina. ‘Ok, I will tell the head of the Executive Power. He is a really good man. Do you know him? He was recently appointed?’ Elina responds, saying she does not know him. The woman repeats that she will speak to him and they will make sure Elina goes to a different school.

In another video, Elina is asked about the school headteacher and her peers. Elina explains that the headteacher wanted to get rid of her class because it was a troubled one and that her classmates were mean to her.

Once this questioning was over, Elina was finally taken to the hospital, two hours after she attempted suicide.

But the accounts from Elina’s parents tell a different story. According to Elina’s mother, the two were not allowed to visit Elina at the hospital. In an interview with the BBC Azerbaijan Service, Elina’s mother said the doctor had told them that Elina was absolutely fine and that both parents could visit their daughter once she was relocated to the hospital ward. But while the parents were not allowed to see their daughter, the school headteacher, her husband, and one other person, reportedly a parent of another student, went to see Elina.

Elina’s parents were also not informed when their daughter died. ‘They called us from the hospital and told us Elina’s condition was critical. When we arrived at the hospital we were sent from ward to another. When we came back from another ward, we were told our daughter died’.

Elina died on 6 April. In a disturbing video taken in the hospital, a woman is heard asking a security guard to call the doctors and officially declare her time of death before they disconnect Elina from an oxygen machine. Neither of the two doctors who local media say was treating Elina, Vagif Rahimov and Ilgar Hagverdiyev, were present. The two have not been heard from since and it is unclear if they have been contacted by investigators.

A campaign to end bullying

Elina’s death sparked a social media campaign calling for an end to bullying in Azerbaijan, and to punish everyone involved in her death. #Elinaucunsusma (Don’t stay silent about Elina’s death) #bulingeson (end bullying) were trending on social media. A team of activists put together explainers about what bullying is and its consequences on human life. A popular rapper, Jamal Ali, wrote a poem about Elina.

The campaign has led the authorities to take some action while the front of the school has been turned into a small memorial for Elina, with people leaving flowers, toys, and letters by the school fence.

The school’s headteacher seemed unmoved by the tragedy and the growing anger. An audio recording leaked to the media in which she told a journalist to describe Elina as a child from a bad and unsuccessful family; and that she was neglected by her mother who was divorced and this was her second marriage, sparked even more anger.

On 11 April, the Baku Prosecutor’s Office opened a criminal case into Elina’s suicide while the head of the State Committee for Family, Women and Children Affairs Hicran Huseynova said that the president and the first lady had expressed personal interest in the case and would follow developments closely.

On 12 April, Abbasova, her deputy Lala Maharramova, and the school psychologist Konul Agayeva were all dismissed. On 16 April, the Sabayil District Court remanded Abbasova into house arrest. She was charged under two articles of the criminal code — negligence and endangering a life leading to death. If found guilty, the headteacher faces ₼300 ($175) in fines or up to six months of correctional work on the first count and up to 5 years in prison if found guilty on the second count.

This was just one of the demands prepared by the group behind the campaign. Other demands called for the government to adopt anti-bullying legislation and for the Ministry of Education to carry out research and questionnaires in schools on bullying and preventive mechanisms, among others.

Instead of taking these demands into account and addressing the core of the problem, some schools have reportedly begun removing window handles to prevent students from committing similar acts. The Ministry of Education also dismissed claims that it had ordered schools to install metal bars outside school windows.

So far, Elina’s story has sparked a wave of stories from former students and teachers about bullying they remember, illustrating that bullying is not new in Azerbaijan.

It has also shown that bullying, as a concept, does not exist in the country, nor are there measures in place to address and deal with the problem.

As the investigation continues, it is yet to be seen whether Elina’s story will serve as a precedent in not only punishing the perpetrators of this crime but adopting preventive measures.

The film Scarecrow ends with Lena’s classmates asking for forgiveness. Elina’s story ends with her final letter, asking why everyone hates her so much.