Having secured the agreement of parliamentary opposition parties Bright Armenia and Prosperous Armenia, Prime Minister Nikol Pashinyan announced that elections will be held on 20 June.

Nikol Pashinyan made the announcement on Facebook, stating that he had met with Prosperous Armenia head Gagik Tsarukyan, who agreed that ‘the best way out of the domestic political situation is extraordinary parliamentary elections’.

Edmon Marukyan, the head of the second opposition party in parliament, Bright Armenia, had already agreed to hold parliamentary elections.

Tensions have been high in the country since a statement issued by the top officers in the Armed Forces on 25 February urging Pashinyan to resign. The Prime Minister described the statement as an attempted military coup. No other attempts by the army to enter politics have taken place since.

The Homeland Salvation Movement, the opposition group currently occupying Yerevan’s central Baghramyan Avenue in an ongoing protest, has opposed elections under Nikol Pashinyan, and has instead been demanding that former Armenian Prime Minister Vazgen Manukyan replace Pashinyan in a transitional government.

Manukyan confirmed on Thursday that he would not take part in the elections but said his movement would make an announcement on their own decision after meeting to decide.

Polling by the International Republican Institute (IRI) conducted in February suggested that Pashinyan’s Civil Contract party was by far the most popular party, with 33% of respondents saying they would vote for them.

They were followed by Prosperous Armenia on 3%, Robert Kocharyan on 2%, and all others gaining only 1% or less.

However, a great deal of uncertainty remains as 42% answered that they would not vote for any party, while 14% answered ‘do not know’ or refused to answer.

Under Armenia’s current electoral code, parties must win at least 5% of votes in order to enter parliament, or 7% for blocs. 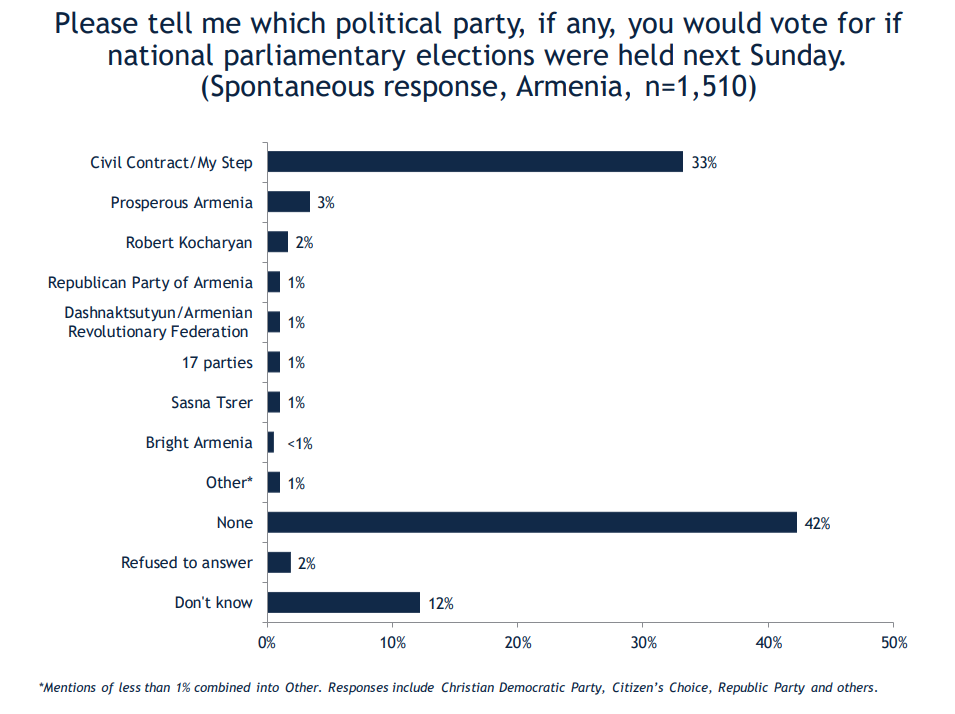 In order for snap elections to take place, Pashinyan must now resign in the coming days, after which parliament, which is controlled by Pashinyan’s party, will have two opportunities to select a new prime minister within two weeks. If Parliament fails to do so, it will automatically be dissolved and new elections called.