The recent extermination of stray dogs in Kaspiysk, a town in Daghestan, with the support of local authorities there has caused outrage among animal rights activists.

Photos killed dogs in the centre of the town appeared online at the end of May and spread fast among Daghestani Instagram and Facebook users. People reported in the comments that the animals were killed in plain sight of passersby.

‘They’ve repeatedly killed dogs and left corpses there right in front of children’, a witness, Angela Usmanova from Kaspiysk, told OC Media. She watched as Abakarov Magomedgardzhi, an acquaintance, killed two dogs in the centre of the town.

‘They pay ₽400 ($7) for each dog and their dirty salary depends of how many bullets they spare. He shot four bullets at one dog. Children were feeding these dogs, they raised the dog and she wasn’t dangerous’, Angela remarks.

Raisa Chumak cleans the central square in the town every day. She begins work early in the morning. She has witnessed dogs being killed for several days in row.

‘I begged him not to shoot them in my presence. I was shocked. A dog was near the statue of Lenin. He shot it, she rolled down from there. He didn’t take the body. Slaughterer! In this month, they are not afraid of sin’, the old woman says angrily, concerned that Muslims are murdering animals during Ramadan.

Animal activists in Kaspiysk have repeatedly appealed to the head of Municipal Unitary Enterprise Clean City, Shamil Bagamayev requesting a resolution to the situation with stray dogs in a less cruel manner. However, Bagamayev responded that he received the order to kill the dogs from the town’s administration.

Viktoria Shevtsova, head of the Centre for the Protection of Animals — Ecolife, came to Kaspiysk to understand the situation and tried to get information from the administration of Kaspiysk, but no one would meet her. Later, she managed to reach Bagamayev by phone, who at first denied that the killing of stray dogs was happening, because the reward for catching or shooting stray dogs had not yet  been announced.

However, during the phone call, heard by OC Media, Bagamayev repeatedly made it clear that he supports the killing of dogs, even thoroughbreds, justifying this with the ‘security of people’.

‘If even a single resident of Kaspiysk calls me and tells me that there is a pitbull terrier walking around the city (and they are characterised as aggressive) I don’t care, I will come and I will shoot the dog and I won’t look at a single law at all’, he told Shevtsova.

‘As for the mongrels, I tell you this is a lie, no one shoots them’, he added.

Animal rights activists say that it’s been repeatedly proven that shooting dogs cannot solve the problems of dog attacks, and that the only way is to catch them and work with the animals.

‘Sterilisation, vaccination of the animal, and its return to its former habitat will reduce the aggression. They lose the instinct for reproduction and they no longer run in packs’, says Viktor Shevtsova.

The animal activists appealed to the Mini 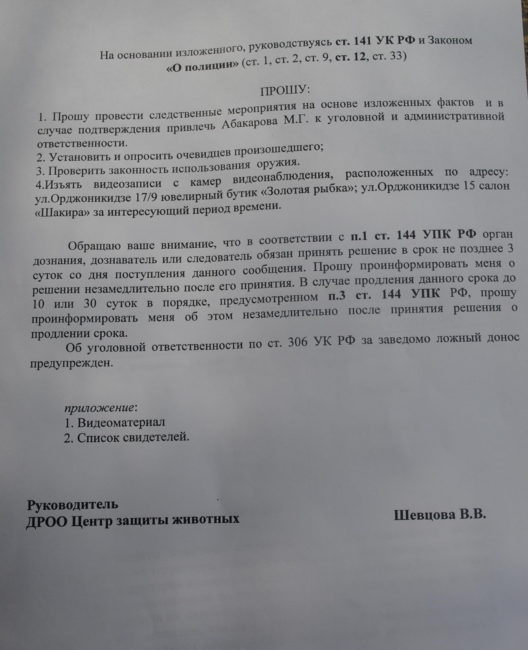 stry of Internal Affairs in Kaspiysk requesting administrative and criminal cases be brought against Magomedgardzh Abakarov — a man who according to the witnesses is shooting the dogs.

According to the Russian law, if the violent treatment of animals results in their death, a person can be fined by up to ₽80,000 ($1,400) or six months to one year in jail.

The activists plan to launch petition and collect signatures against the killing of stray dogs in Kaspiysk. They also hope that it will be possible to have a similar animal shelter to that which recently appeared in Makhachkala.