News crews from two TV Channels — Mtavari and Formula — have been attacked while on duty in two separate incidents over the past two days in Georgia.

In the early hours of Friday morning, Ema Gogokhia, a Zugdidi correspondent from opposition TV channel Mtavari, reported that she and her camera operator were attacked outside the office of the Conservative Movement, a party established by the extremist pro-Russian group Alt Info.

Gogokhia said that she was injured and their equipment was destroyed, while around eight people beat up her camera operator. She said that four cars stopped outside where they were filming and people armed with brass knuckles came attacked them.

The channel said they were reporting on an incident in which activists had spray-painted Alt info’s office in Zugdidi with messages supporting Ukraine, and that employees of Zugdidi City Hall were cleaning it up.

Shota Martinenko, a prominent member of Alt Info, shared footage of the attack on Facebook captioning it ‘Conservative Movement members against Natsebi [the United National Movement) in Zugdidi’. 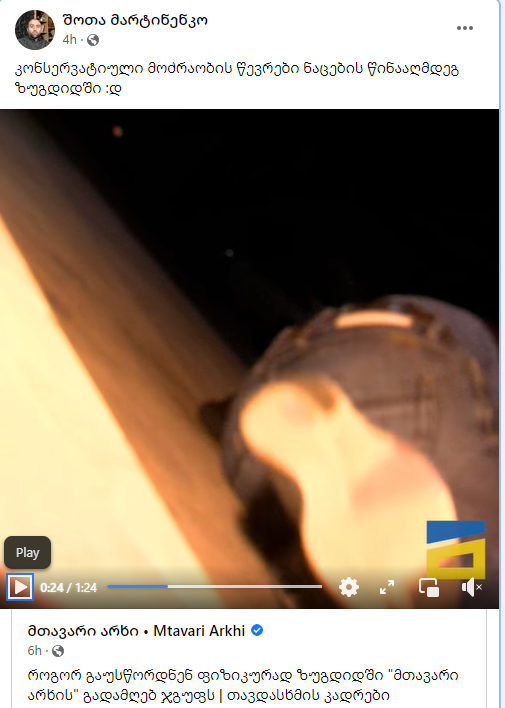 The Special Investigative Service has launched an investigation for interfering with a journalists’ work, which carries a maximum sentence of two years in prison.

The attack came a day after a crew from Formula TV was attacked in Tbilisi.

The journalists were recording an interview at a cafe on Irakli Abashidze Street when one of the patrons allegedly became aggressive.

Formula reporter Nino Chakvetadze said the man attacked them after learning they were from Formula, and that she and two camera operators were injured.

The attacker was arrested on Friday and charged with interfering with a journalists’ work. Koka Katsitadze, the head of the Special Investigation Service, said that the man may face more serious charges.

The government has been accused by many media and civil society groups of encouraging violence against journalists, especially after the homophobic riot in July 2021 during which at least 50 journalists were attacked. Alt Info were the main organisers of the violence.

The Media Advocacy Coalition released statements following both of the recent attacks in which they blamed the ‘hostile environment created for the media’ which they said was ‘encouraged by the inappropriate response [from the authorities] to a number of crimes committed against journalists’.

The attack on the Formula crew happened the same day as Interior Minister Vakhtang Gomerauri faced questions in parliament over the 5 July attacks. The minister said ‘it was a very bad incident’ which they had not anticipated, ‘especially physical violence’.

‘It doesn’t matter who did it, in this case, Alt info and the public or whoever was there. This is totally unacceptable and a very bad thing happened’, he said.

More than two dozen people were arrested for the 5 July violence, however, none of the organisers was among them.