Medical professionals across Georgia have held a five-minute silence in protest over the detention in South Ossetia of Georgian doctor Vazha Gaprindashvili.

Gaprindashvili was detained on 9 November. The authorities in South Ossetia have accused him of ‘illegal border crossing’, ‘provocative’ activities, and of participating in the 2008 August War.

On Monday, medics in several Georgian cities held ‘white coats’ rallies in solidarity with Gaprindashvili, an orthopaedic surgeon and President of the Georgian Society of Orthopaedy and Traumatology (GSOT). 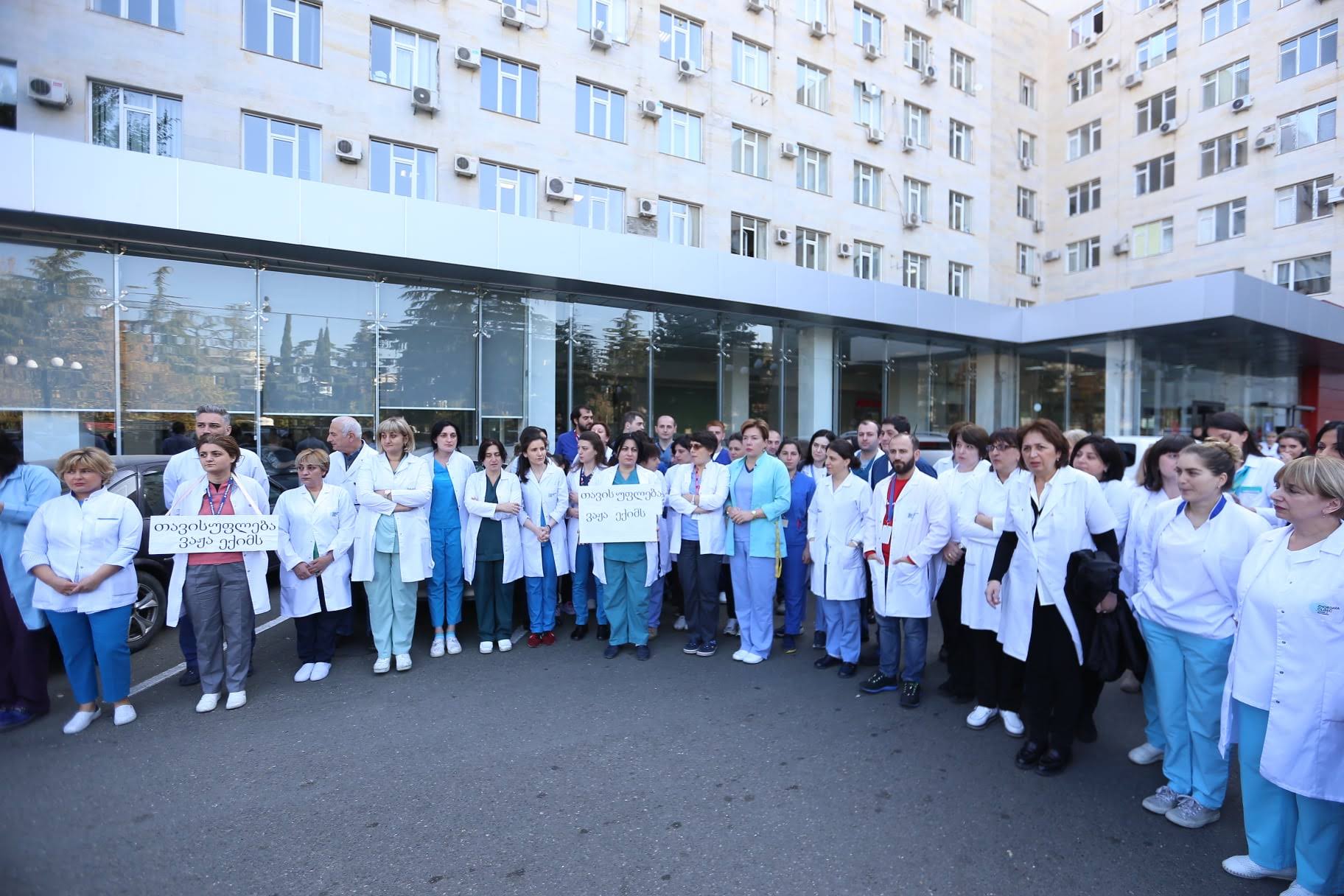 On 19 November, South Ossetia’s State Security Committee (KGB) stated that Gaprindashvili, 58, who they claimed was a Georgian Army reserve captain, ‘actively participated’ in the August 2008 war as an army doctor.

The KGB said that Gaprindashvili was one of 40 people detained for trespassing the ‘state border’ in November, adding that an ‘increased number of incidents’ was related to the Georgian authorities constructing a police checkpoint near the village of Tsnelisi (Uista).

They said that the South Ossetian authorities would respond to ‘provocative activities by Gaprindashvili and his curators’ exclusively in a legal manner to ‘prevent’ similar violations and an ‘escalation of tensions’, and to defend South Ossetian sovereignty.

Soon after the statement, Gaprindashvili’s spouse, Tamila Lapanashvili, denied the allegation, saying that her husband barely left his clinic in early August 2008 as he was working in Ghudushauri hospital in Tbilisi.

On Monday, the International Committee of the Red Cross (ICRC) said that they had visited Gaprindashvili in prison in the South Ossetian capital, Tskhinvali (Tskhinval) and that he had been able to receive a letter from his family and to send a reply.

His daughter, Irina Gaprindashvili, wrote on Facebook soon after that her father was in good spirits.

On 18 November, Shota Bidzinashvili, a resident of Bershueti, a village under Georgian control near South Ossetia, told Radio Tavisupleba that he had recently spent five days in prison in Tskhinvali together with Gaprindashvili.

They cited Bidzinashvili as saying that prisoners were fed only once a day, kept in damp and badly ventilated conditions, and that Gaprindashvili, who looked after him and other inmates, had protested the conditions to prison officials.

Georgian authorities said they were doing everything possible to involve the international community in facilitating Gaprindashvili’s release.

On 16 November, the US Embassy in Tbilisi called for Gaprindashvili’s immediate release and for crossing points between South Ossetia and Georgian-controlled areas to be reopened.

When access to healthcare & education is becoming critical for many in #SouthOssetia, hard to understand what Russia-backed de facto authorities gain by locking up medical professionals.

On 17 November, Georgia’s Minister for Reconciliation and Civic Equality, Ketevan Tsikhelashvili, said that they were expecting him to be freed ‘within several days’.

Gaprindashvil’s family has said they did not know the circumstances of his detention but assumed he was detained while visiting patients living in Akhalgori (Leningor) who had been unable to cross over to Georgia-controlled territory to receive medical treatment.

Authorities in Tskhinvali reciprocated, installing their own checkpoint nearby, a week before closing the crossing points. They have since insisted that Georgia should remove the new installation.

On 29 October, the European Union Monitoring Mission in Georgia (EUMM) criticised the South Ossetian authorities for closing the crossing points, saying it was ‘depriving local communities of prompt and adequate medical care’.

The statement came after the death of 70-year-old Akhalgori resident Margo Martiashvili, who was barred from crossing the border to receive medical treatment.

In the past few days, Margo Martiashvili died after not being allowed to use the crossing point to get fast treatment. Tamar Gigauri is now fighting for her life after not being given the chance to receive the medical treatment available only on our side of the occupation line. pic.twitter.com/uwTXFGDPH7

Georgian authorities have also expressed concern over the health of another Akhalgori resident, Tamar Gigauri, who was also refused permission to travel to Georgia-controlled territory for treatment.

Gigauri’s family have denied claims that Vazha Gaprindashvili was visiting them.