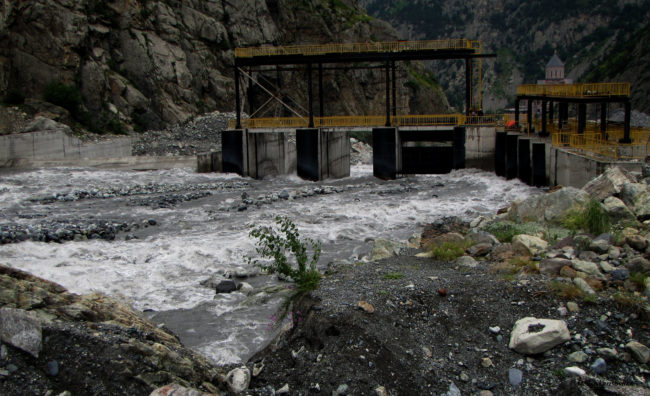 According to the PCM’s response to the complaint, the the EBRD failed to sufficiently assess the potential risk of natural disasters caused by the project, including formation of ravines, landslides, debris flows, rockslides, and mudflows.

Georgian environmental group Green Alternative, along with several local organisations, submitted a complaint to the PCM in 2014. In it, they described a range of problems with the project, including inadequate assessment of its environmental and social impacts, and the fact that the construction was taking place in a protected area.

The complaint cited a previous complaint upheld by the PCM against another EBRD project, the Paravani HPP in southern Georgia’s Samtskhe-Javakheti Region. Activists claimed that the EBRD ignored the findings in that case, and implemented similar practices in the Dariali project.

The PCM concluded that the bank violated its own standards for environmental protection and social policy when they made the decision to finance the Dariali project.  According to Green Alternative, the EBRD have accepted the findings.

According to Davit Chipashvili from Green Alternative, a co-author of the complaint, the PCM’s judgement will be a huge blow to Minister of Energy Kakha Kaladze, who has repeatedly claimed that the Dariali project complied fully with the international standards.

‘No one will be able to use the Dariali HPP project as an example of a project complying with international standards’, Chipashvili said.

The PCM’s report and recommendations do not carry any legal weight, but should be taken into consideration during future EBRD projects.

The publication of the report will not prevent the Dariali HPP project from going ahead. Construction of the $123 million project began in April 2017; its planned capacity will be 108 MW, with an annual average output of 510 million kW⋅h.