Hundreds were hospitalised after police and protesters clashed on 20–21 June, and questions remain over the actions of the police. Despite an investigation into violence by police being opened, no officer has yet been charged.

On 20–21 June, protesters clashed with riot police throughout the night in Tbilisi as they attempted to occupy the parliament building. The protesters were angry that a Russian MP was invited to address the Georgian Parliament.

Some protesters threw plastic bottles and other objects at the police, more so after police first responded with tear gas. Video footage shows at least one police officer being dragged away and beaten by protesters.

Eighty police officers had to be hospitalised, including at least one with an eye injury.

Despite the violence police were faced with, they have come under intense scrutiny over the amount and methods of force they used in response.

After at first deploying tear gas, police later used rubber bullets, firing seemingly indiscriminately into the crowd, as well as a water cannon and a sonic weapon.

Another two, aged 32 and 46, were on life support for several days — both due to head injuries sustained from rubber bullets.

As the authorities and human rights groups probe the use of force, the protests, now in their 14th day, have largely focussed on the police violence. Their only remaining demand is the resignation of Interior Minister Giorgi Gakharia over the violence.

[Read more about the ongoing protests: Protesters in Tbilisi march to Ivanishvili’s residence to ‘interrupt his sleep’]

Amidst contradictory speculations and accusations over what really happened, OC Media looked into five possible violations committed by the authorities, and their results.

1. No warning was given before force was used

Officials including the Interior Minister have insisted that the police deployed ‘special measures’ only after enduring hours of attacks by the crowd and only after their ‘and other people’s lives’ were put in danger.

However, the authorities are yet to prove that equipment like tear gas and rubber bullets were used proportionally and in accordance with the law.

The OSCE Guidelines on Freedom of Peaceful Assembly recommends police to allow ‘time for people in a crowd to respond as individuals to the situation they face, including any warnings or directions given to them’.

No warning was given before police deployed tear gas or before they began firing rubber bullets.

No witness independent of law enforcement agencies has publicly claimed to have heard any warning or to have witnessed police giving protesters a reasonable time to stop confronting them or disperse.

OC Media, whose journalists were present throughout the evening, can confirm that the first audible warning of the use of tear gas came only from after additional riot police units were deployed on Rustaveli Avenue after at around 01:30 on 21 June.

By this time, a number of people, including journalists, had already been injured by rubber bullets near the stairs of parliament.

In one instance, RFE/RL's Georgian service, Radio Tavisupleba filmed a man surrounded by police officers beating him with batons.

In the footage, ‘we are being filmed’ is heard, after which officers stopped attacking the man, now laying on the ground.

Another protester, Giorgi Mikadze, claimed on his Facebook page that he was heavily beaten by police after being detained in front of parliament out of sight of the cameras.

3. The use of rubber bullets

Prime Minister Mamuka Bakhtadze claimed that ‘rubber bullets and gas was not and will never be a signature of Georgian Dream’ several minutes before riot police came out into Rustaveli Avenue, warning protesters to disperse.

Gakharia insisted on 27 June that the police used only legally permitted ‘non-lethal’ ammunition but did not rule out that ‘certain violations’ in their use may have been committed.

He also noted that the bullets were acquired in August 2012. Georgian Dream ousted the United National Movement from power in parliamentary elections in October 2012.

He rebuffed allegations that bullets designed for use on large animals were used, allegations widely circulated on Facebook.

OC Media found no evidence that rubber bullets designed for anything other than riot control were used by police. However, the number of head injuries sustained indicates that police shot rubber bullets carelessly if not directly aiming for the heads of protesters.

The Public Defender said that injuries sustained ‘were not in compliance with the typical damage caused by rubber bullets’.

Pictures of different kinds of bullets used have circulated widely on Facebook, and fall into three categories.

The first are small black rubber pellets of two different sizes allegedly used during the dispersal.

Orange bullets resembling a variant of 12-gauge rubber projectiles were also used. The product information of a similar rubber bullet on the Firequest ammunition online magazine says that they can penetrate the body if shot from close range, and that injuries — depending on ‘the weapon used, distance to target, clothing, body weight, and part of the body hit’ — can also be fatal.

According to Georgian political scientist and military expert Vakhtang Maisaia, riot police use such orange bullets for defence, to fend off immediate physical threats and to paralyse an oncoming attacker.

The use of rubber bullets by police was authorised under a 2009 Decree by then–Interior Minister Ivane Merabishvili and was reaffirmed in 2015 by a  decree from State Security Service Head Vakhtang Gomelauri.

The 2013 Decree on Keeping, Carrying, and Using Special Police Equipment signed by then–Georgian Interior Minister Aleksandre Chikaidze repeats the international provisions on the use of such weapons mentioned above almost verbatim.

On 22 June, the ‘Civil Movement’, led by 2017 Tbilisi Mayoral candidate Aleko Elisashvili, started a petition demanding a ban on the use of rubber bullets by police. The petition has garnered 6,500 signatures so far.

4. Journalists were not spared

Over 35 journalists were reported injured during the clashes including OC Media Co-Director Mari Nikuradze, who was hit with a rubber bullet.

Several journalists who stood together on an elevated spot, often used by journalists during protests outside parliament, were shot with rubber bullets.

Guram Muradov, a photojournalist from Civil.ge, sustained numerous injuries on his back from rubber bullets.

(A riot police officer aims his weapon at a media crew. The Interior Ministry announced on 24 June that they had suspended 10 police officers and found elements of criminality in the conduct of two of those officers, Rustavi 2)

Several journalists claimed they were shot with rubber bullets even after identifying themselves to police.

Nika Mukhigulashvili, a journalist from the Georgian Public Broadcaster, was detained while he and his co-worker documented police officers chasing young men in through residential areas.

According to Mukhigulashvili, after refusing to hand over their recordings of the police pursuit, 4–5 officers beat him and then arrested him.

Georgian Public Defender Nino Lomjaria urged the Prosecutor’s Office to launch a separate investigation into the use of force against journalists.

‘Unlawful interference with the journalist's professional activities’ is a criminal offence punishable by up to two years in prison when committed using an official position.

The Georgian Young Lawyers’ Association, Human Rights Education and Monitoring Centre and other local rights groups that represented those detained on 20–21 June have complained that some of the detainees were deprived of access to a lawyer.

The hearings of their cases at Tbilisi City Court were conducted in an accelerated manner and frequently with the lack of appropriate microphones and speakers so those observing proceedings struggled to hear what was happening.

Rights groups have said that many detainees had limited access to a fair trial, which violated their fundamental human rights. 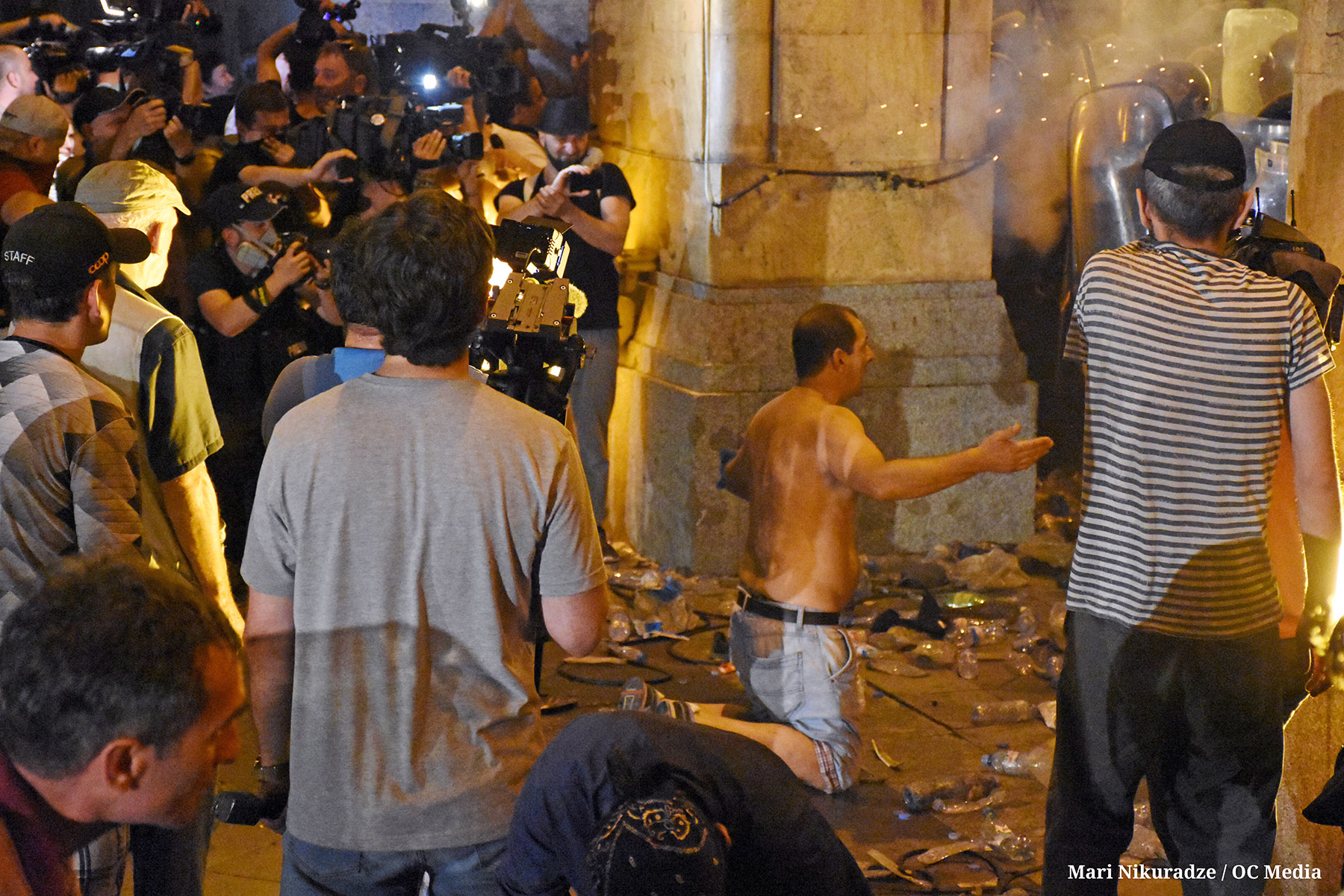 Initially, the ruling Georgian Dream party tried to explain the injuries away by identifying the United National Movement (UNM) as the instigator of the violence.

They said that ‘opposition leaders’ fled the scene after radicalising young people; leaving them to face off with riot police.

At 20:40 on 20 June, Nika Melia, a prominent MP from the UNM, called on protesters to ‘peacefully occupy’ parliament.

‘If those who should resign do not step down within an hour, I believe that we have nothing to do here in front of the parliament. We have to march in peacefully, with our hands in the air, into the parliament building and make our protest even more intense. We will come out once they resign’, he said.

He made a similar appeal earlier that day inside parliament soon after protests broke out.

At 21:00, UNM gave a one-hour ultimatum to the government and threatened to start ‘civil disobedience’ by blocking bridges, motorways, and railways, unless their demands were met.

Melia can be seen in video footage once the protest turned violent encouraging the crowd to move forwards towards police.

On 24 June, the Prosecutor’s Office launched an investigation into the possible excessive use of force by police and urged all witnesses and those with any evidence to come forward.

No law enforcement officer has so far been detained.