Georgia’s parliament has stripped Nika Melia, a prominent MP from the opposition United National Movement Party (UNM), of his parliamentary immunity — effectively greenlighting his arrest. The Prosecutor’s Office requested the move as they suspect Melia of inciting protesters to violence at an anti-Russia protest outside parliament on 20–21 June.

On Wednesday evening, parliament voted 91 to 0 to strip him of his immunity after prosecutor’s claimed he could influence witnesses, flee, or commit new crimes. If convicted on charges of ‘organising group violence’, Melia could face 6–9 years in prison.

MPs debated the issue for over 5 hours in an at times heated atmosphere, which required ushers several times to step in between MPs. As MPs debated the motion, supporters of Melia protested outside parliament.

Addressing parliament, Melia said he was proud of his actions. ‘I will have a lot to say with pride to my children and grandchildren and you will have little, especially considering that you allow the enemy to sit in the seat of the chairman on Parliament’, he said.

‘I can look into your eyes, but you can’t look into mine and this can be sensed in this hall’, he added.

Protests broke out on 20 June after Russian MP Sergey Gavrilov was invited to address Georgia’s parliament from the Chairperson’s tribune.

In the evening on 25 June, hundreds of protesters gathered outside Parliament marking the 6th consecutive days of protests since 20 June, when riot police deployed tear gas, rubber bullets, and water cannons against protesters who were attempting to storm parliament.

‘If those who should resign do not step down within an hour, I believe that we have nothing to do here in front of the parliament. We have to march in peacefully, with our hands in the air, into the parliament building and make our protest even more intense. We will come out once they resign’, he said.

Georgia’s constitution permits MPs to be criminally prosecuted, detained, arrested, or have their office, vehicle, or residence searched only with parliament’s approval. The only exception is if they are caught in the act of violating the law.

Melia’s immunity was previously debated a year ago, in June 2018, after police detained him at an anti-government demonstration in front of parliament. The Interior Ministry cited an immediate need to stop him from violating the law. Melia was inspecting cars parked near the demonstration, according to him in order to search for ‘high-ranking law enforcement officials’. Authorities later argued they merely ‘removed’ him from the scene, relocated, and released him afterwards.

Only one prior case of an MP from being stripped of immunity has occurred in Georgia’s post-independence history. In 1999, the fifth convocation of Georgian parliament stripped majoritarian Boris Kakubava of his immunity upon the request of prosecutors, who suspected him of having ties to an assassination attempt against then-President Eduard Shevardnadze.

A new chair of parliament

On 24 June, party Chair Bidzina Ivanishvili announced that 2020 parliamentary elections would be held under a proportional system and with no threshold.

On 21 June, the Chair of the Parliament, Irakli Kobakhidze, resigned over Gavrilov’s invitation to speak.

On 24 June, Gavrilov told Russian TV channel NTV that he was invited to parliament by a representative of parliament. ‘We did not suspect something would happen for two reasons. Not only because Georgian leaders expressed their hospitality — the representative told me that the “reception will proceed on the highest level, we are waiting for your forum, it will affect the authority and the rating of Georgia”, but also because there were written guarantees of hospitality and our safety’, said Gavrilov. 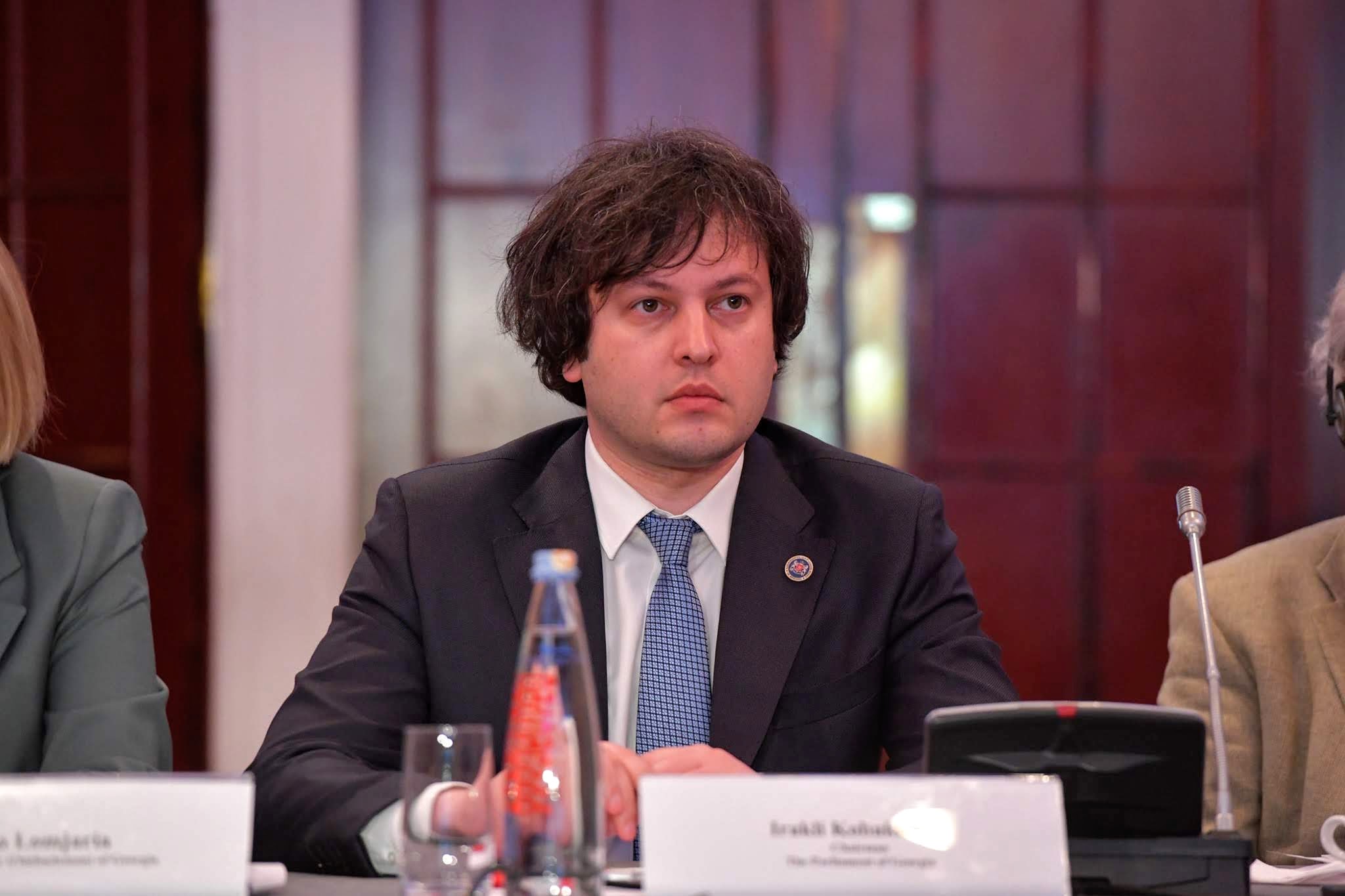 Kobakhidze's resignation was one of the protesters' main demands. (Irakli Kobakhidze / Facebook)

Zakaia Kutsnashvili, the Georgian Dream MP who was in charge of organising the session, also resigned as an MP.

On 25 June Archil Talakvadze was elected by MPs to replace Kobakhidze as parliamentary chair.

MP’s were met by protesters outside parliament on Tuesday and the plenary session started with a verbal confrontation between ruling party and opposition MPs which quickly escalated into a physical confrontation. Georgian Dream MPs accused the UNM party of orchestrating the violence during 20 June’s demonstration while the opposition demanded they take responsibility for the Russian MP’s appearance in parliament.

On Thursday, the new chair of parliament said that Gakharia ‘prevented violent development of processes in the country’.

‘Policemen were attacked and what followed was an answer to the two-hour violent attack, which was most likely organised by one particular group’, Talakvadze said.

Another MP to speak in support of Gakharia was Irakli Sesiashvili, who said that  ‘around 100 policemen were injured within two hours and only 14 civilians got hurt in the crowd crush’.

He elaborated that ‘our policemen stood still patiently’. Later he said that his statement was misinterpreted by the media but still apologised.

On 21 June, the Interior Ministry said they had detained 305 people during and after the clashes.

On 25 July, the Tbilisi Court of Appeals announced that they had released 51 of 61 detained on the night of 20 June who had challenged their pre-trial detention. According to the court, some of those cases were dropped while in others judges issued warnings or reduced the bail.

During 20–21 June’s clashes, 2 people lost an eye after being hit by rubber bullets fired by riot police.

Protesters, who have gathered outside parliament every evening since the clashes, have made eyes a symbol of their movement. ‘We can see occupation even with a single eye’, signs protesters held at the rallies said.

Following the protests in Tbilisi, on 21 June, Russian president Vladimir Putin signed a decree temporarily suspending flights of Russian airlines to Georgia as of 8 July and urged Russian companies to stop providing tourism services in Georgia to ‘ensure the safety of Russia and its citizens’.

According to data from the Tourism Administration of Georgia, almost 3 million international travellers visited Georgia during the first 5 months of 2019. Russian tourists made up 18% of the total, the highest share.

They were followed by Azerbaijanis, Armenians, Turks, non-resident Georgians, Ukrainians, Israelis, Iranians, and others.

According to the Tourism Administration’s 2018 report, the number of Russian tourists visiting Georgia has been ‘increasing significantly’ annually.

‘In 2018, the number of international trips from Russia surpassed the one million mark for the first time … with a growth rate of 31.3%’, the report said.

Russian visitors spent an average of 6.3 days in Georgia, the highest of any country, according to the report.

According to an analysis conducted by TBC Bank, ‘in 2018, the share of Russia in total inflows (exports of goods, tourism, remittances, and FDIs) stood at 16% with a tourism share of 19% and a significant contribution to the growth’.

‘The estimated drop in tourism inflows from Russia may be as high as 50%. Even in this case, we believe the impact on growth is manageable and we bet on the GEL’, the paper said.

It said that the estimated share of Russia in tourism inflows stood at around 20% over the last twelve months as of May 2019, and that with ‘assumed 50% drop and 0.75 multiplier, the impact on GDP growth would be -1.5%’.

‘Despite a possible sharp drop from Russia, growth of total tourism inflows is expected to remain in a positive direction of up to 5%, mainly due to the solid increase from other sources, such as the EU with around 10% share and a growth rate of 33.6% YoY over the last twelve months’, it said.

Following Russia’s suspension of flights, a social campaign centred around the slogan ‘Spend Your Summer in Georgia’ was launched by Georgian activists calling on international travellers to visit the country.

According to the TBC report, ‘in the short term, only some positive impact is expected from the ongoing marketing campaign’.

The report suggested Russian restrictions could soon be lifted as they are likely to appear ineffective.