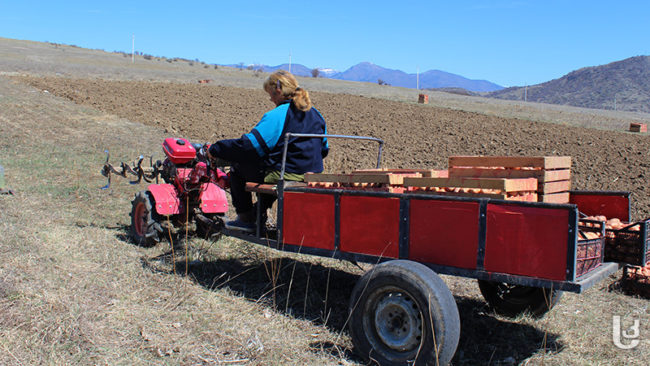 Farmers from southern Georgia’s historic Meskheti region are struggling to plant crops this spring. Meskhetian farmers complain of increased prices on fuel and equipment and say that this year they will plant a much smaller area than last year.

Meskhetians, who originate from Georgia’s Samtskhe-Javakheti Region are Muslims who speak an east Anatolian Turkish dialect. Their entire population of over 100,000 people was deported from the region to Central Asia by Stalin. Unlike other deported peoples, they were not allowed to return after Stalin’s death. A small number remain in Georgia.

On the road from Akhaltsikhe to Adigeni, there are freshly plowed, black lands on the both sides of the road, as well as boxes full of potatoes ready for planting. Some potato farmers plant them with tractors, while others use their bare hands. Locals complain that this year, prices for tractors have increased, and not everyone can afford to rent them.

‘Last year we used to pay ₾1.80 ($0.74) [per 10 square metres of tractor planting] and now it has become ₾2 ($0.82). Then we also used to have special plowing cards [a government subsidy programme] and it was much cheaper to plow’, Dimitri Tabatadze, a local resident of the village of Chorchana told Sknews.

Givi Kachkachishvili, from the village of Arali, wasn’t able to completely plow his land this year. He prepared his land for planting with a walking tractor instead of a full sized one. 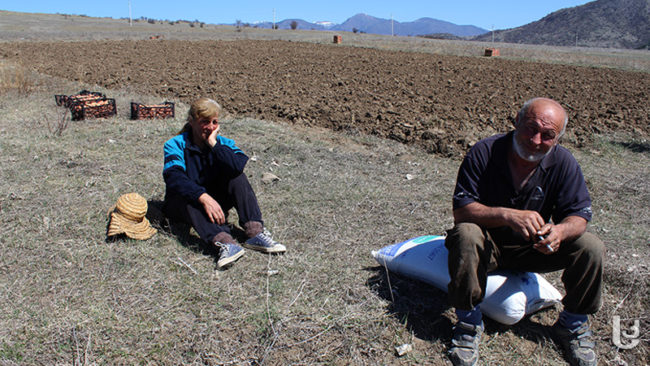 ‘I used to plant potatoes on more than half a hectare every year, but I had to reduce the area by 50%. There are no benefits anymore and we don’t have money to make the work easier and get a bigger harvest’, he says.

It’s easy to see on both sides of the road that large chunks of land haven’t been prepared for planting.

‘If you came here last year, you would see this place full of people working, planting. Now the fields are almost empty’, Merush Nikoghosyan, from the village of Skhvilisi tells Sknews, adding that the majority of locals sowed crops in fall. There are several reasons, including increased prices on fuel and tractors, expensive seeds, and the fact that last year it was very difficult to sell their harvest.

The Kapanadze family, from the village of Bolajuri, decided to plant onions and garlic instead of potatoes, for the same reasons. 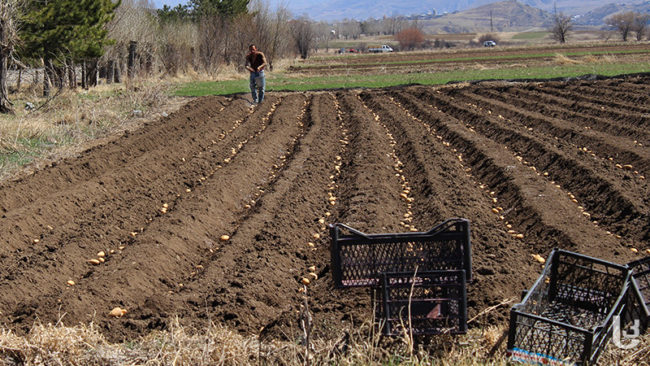 ‘I didn’t even buy the onions and garlic, I had enough at home and I prefer to harvest them rather than paying crazy money to harvest potatoes and then wondering if I will have a good harvest or not’, Lia Kapanadze says.

A private company, Mekanizatori, rents out 55 tractors in this region for cultivation. Representatives of the company insist that the prices are the same as last year.

‘It costs ₾1.50 ($0.61) to plow 10 square meters of land; seeding is ₾1.60. The price increases if it is hard for the tractor to get to the area, or if the land wasn’t cultivated for several years. In those cases they may have to pay more than ₾2’, Kakha Chichaladze, from the Mekanizatori says. 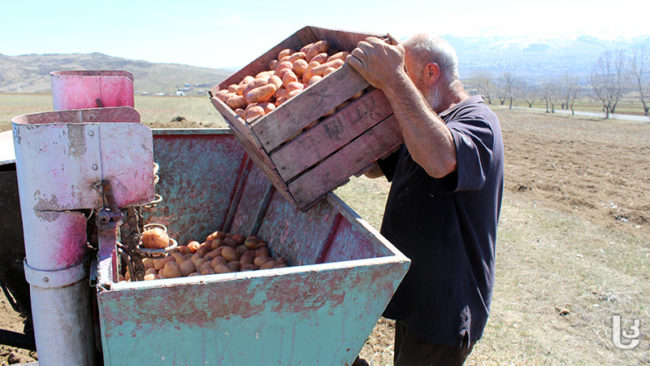 Farmers also say that cultivation is much more expensive this year because they no longer receive ‘plowing cards’, which was a government project to support smallholder farmers in spring. The project provided two types of cards to farmers — plowing cards and agro-cards. The project lasted for four years from 2013–2016.

According to the Ministry of Agriculture, 45,000 farmers benefited from the project every year, and people plowed about 29,000 hectares of land every year in the region. The ministry claims that farmers in Samtskhe-Javakheti received benefits worth ₾32 million ($13 million) from the project. 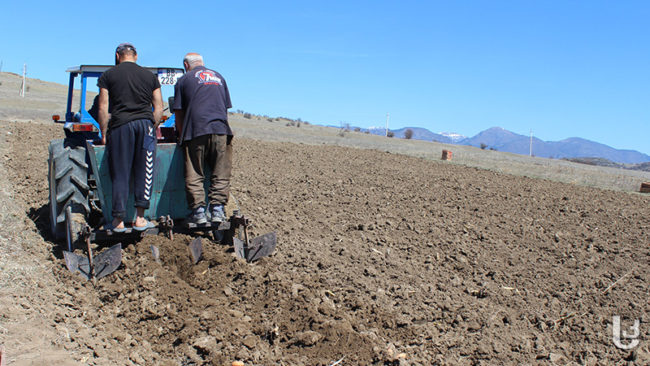 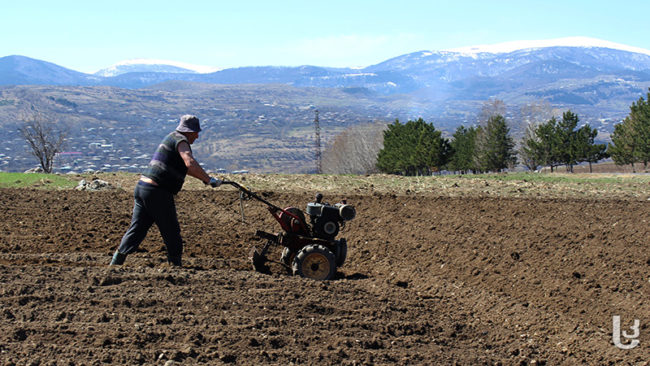 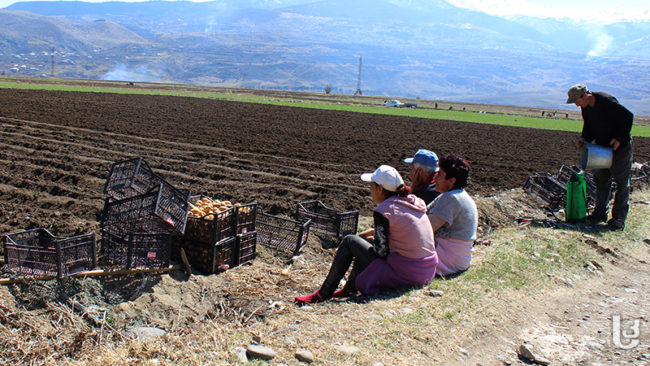 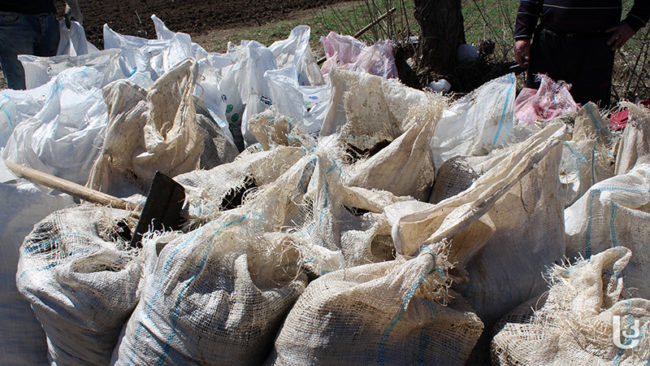 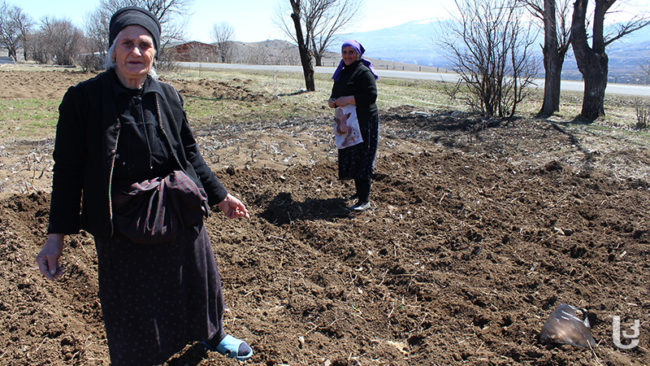