Given the hostile relations between Russia and Georgia over the last 30 years, Georgian public opinion towards their northern neighbour could be expected to be less than positive. But do Georgians differentiate between the Russian state and the Russian people?

A study CRRC-Georgia conducted for the Georgian Foundation for Strategic and International Studies (GFSIS) and the Friedrich-Ebert-Stiftung (FES) South Caucasus Office in 2021 shows that people have conflicting attitudes towards Russia and Russians.

At the same time, half of the population (54%) reported having a negative attitude towards the Russian Federation, while only 18% held positive views.

A quote from one 29-year-old ethnic Georgian woman from Tbilisi who holds a higher education and who participated in a focus group reflects these sentiments:

‘For me, Russia is an occupier, but my [negative] attitude is not towards ordinary Russian people, because if my government did horrible things that would not mean that I am like that too. I adore Russian literature, but I dislike Russia with its ruler. But again, that does not mean that I despise the people’. 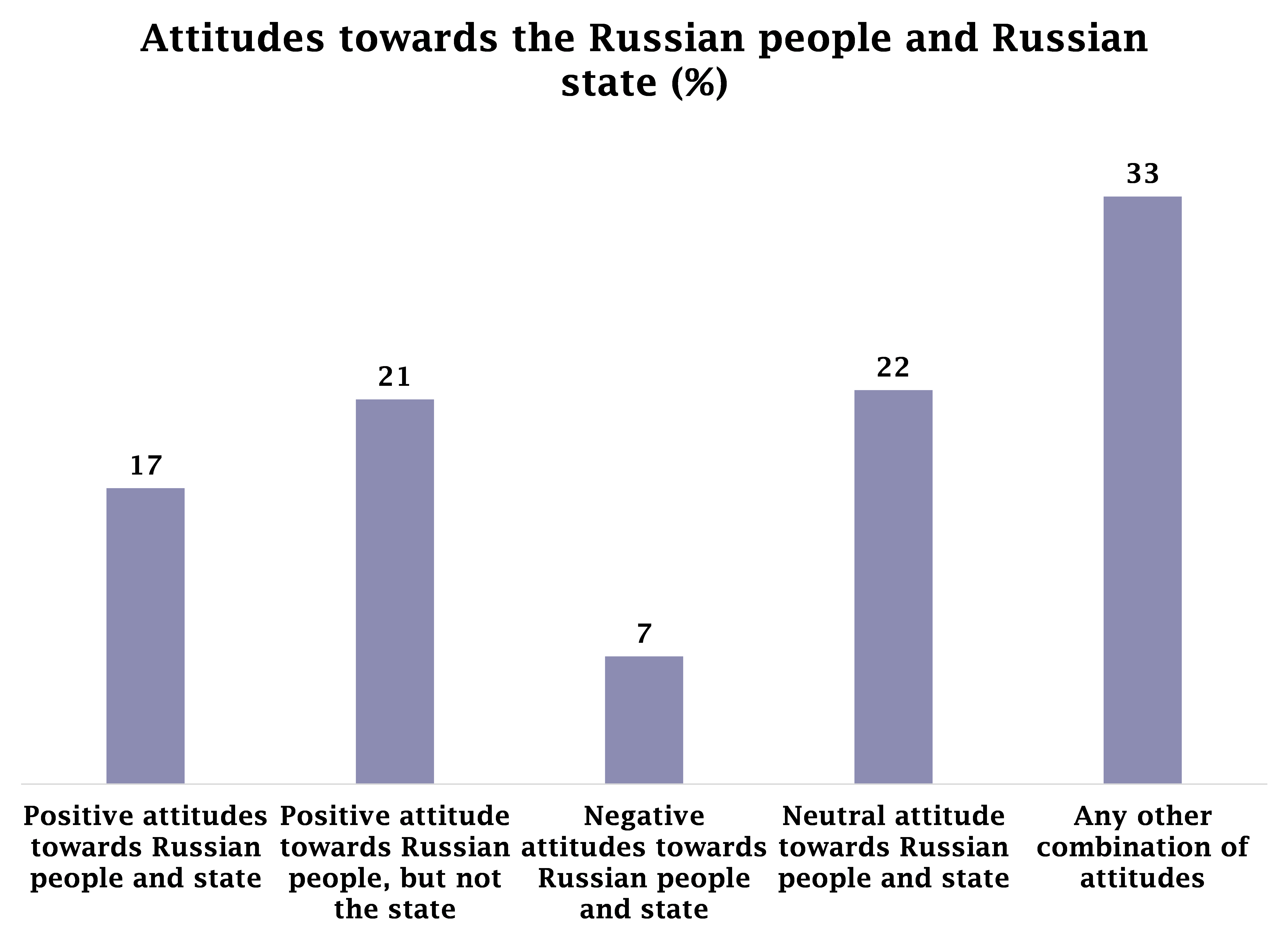 Which set of attitudes people position themselves in was associated with a number of factors, according to a set of regression analyses.

Older people were more likely to have positive views of Russians but not Russia.  This finding might be explained by the closer relations which older people had with Russians during the Soviet Union.

Indeed, this view was often expressed in focus groups, with participants noting that friendships are less common among young people. One 50-year-old ethnic Georgian woman with a higher education from Samagrelo stated:

‘Considering we are neighbours, we should deepen relationships and make them better. People can make anything happen. Politics is one thing, but people’s power is boundless. My generation feels that way, but the younger generation feels differently. They don’t speak Russian either, and can’t imagine any kind of relationship with Russians. We, the older generation, have more nostalgic sentiments [and can] set politics aside.’

The data showed a similar pattern with attitudes towards Georgia’s integration with the European Union. 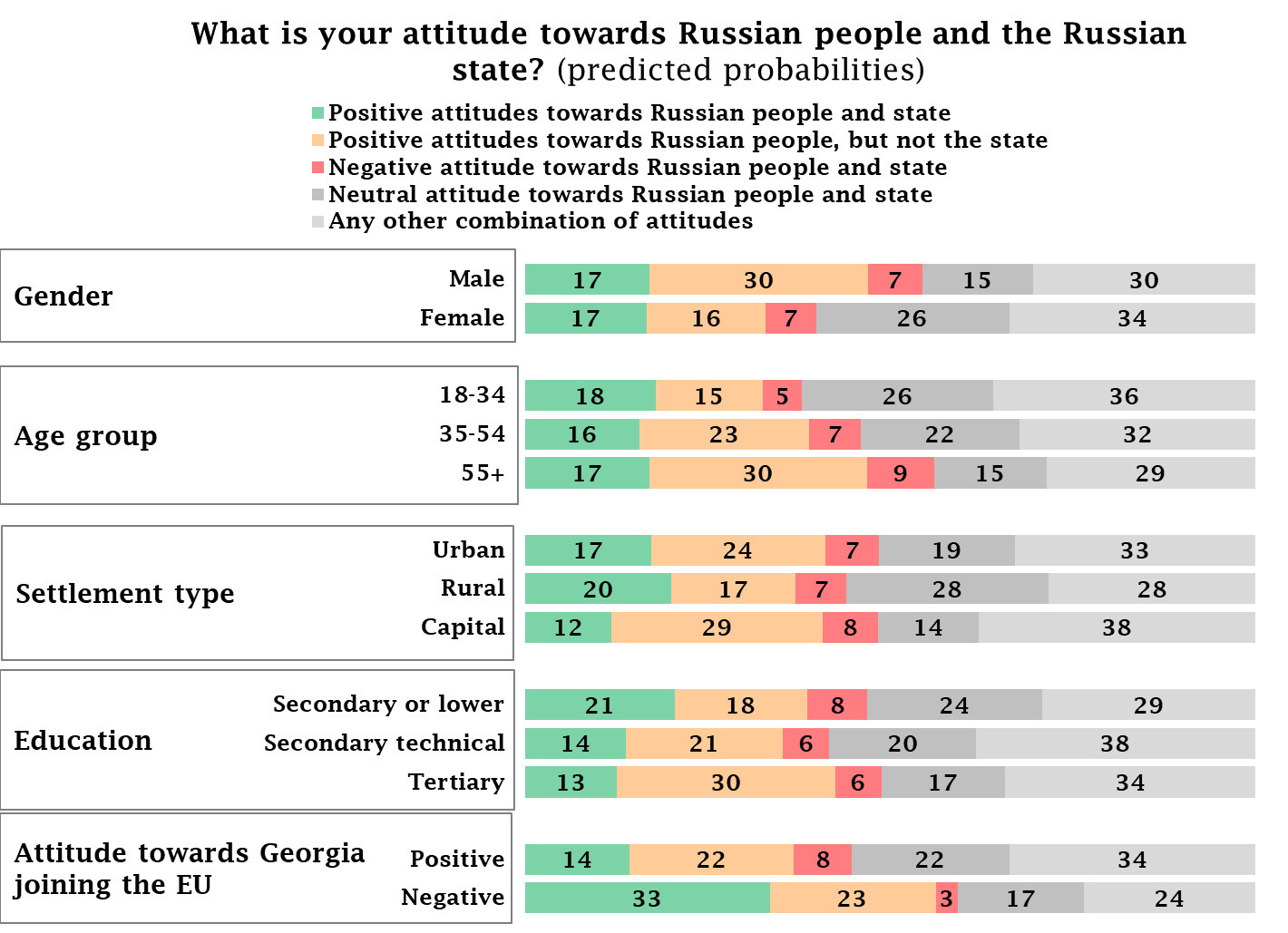 The findings suggest that attitudes towards the Russian people and the Russian state differ in Georgia.

Men, those living in the capital, people with tertiary education, and older people held a more positive attitude towards the people, but not the state.

As younger people have relatively weak links with Russians, it is reasonable to assume that what goodwill exists towards Russians is likely to wane in the future. How dynamics play out given these findings though, remains an open question. What is clear though is that people with negative attitudes towards Georgia’s Euro-Atlantic integration also have more positive attitudes towards both Russia and Russians. 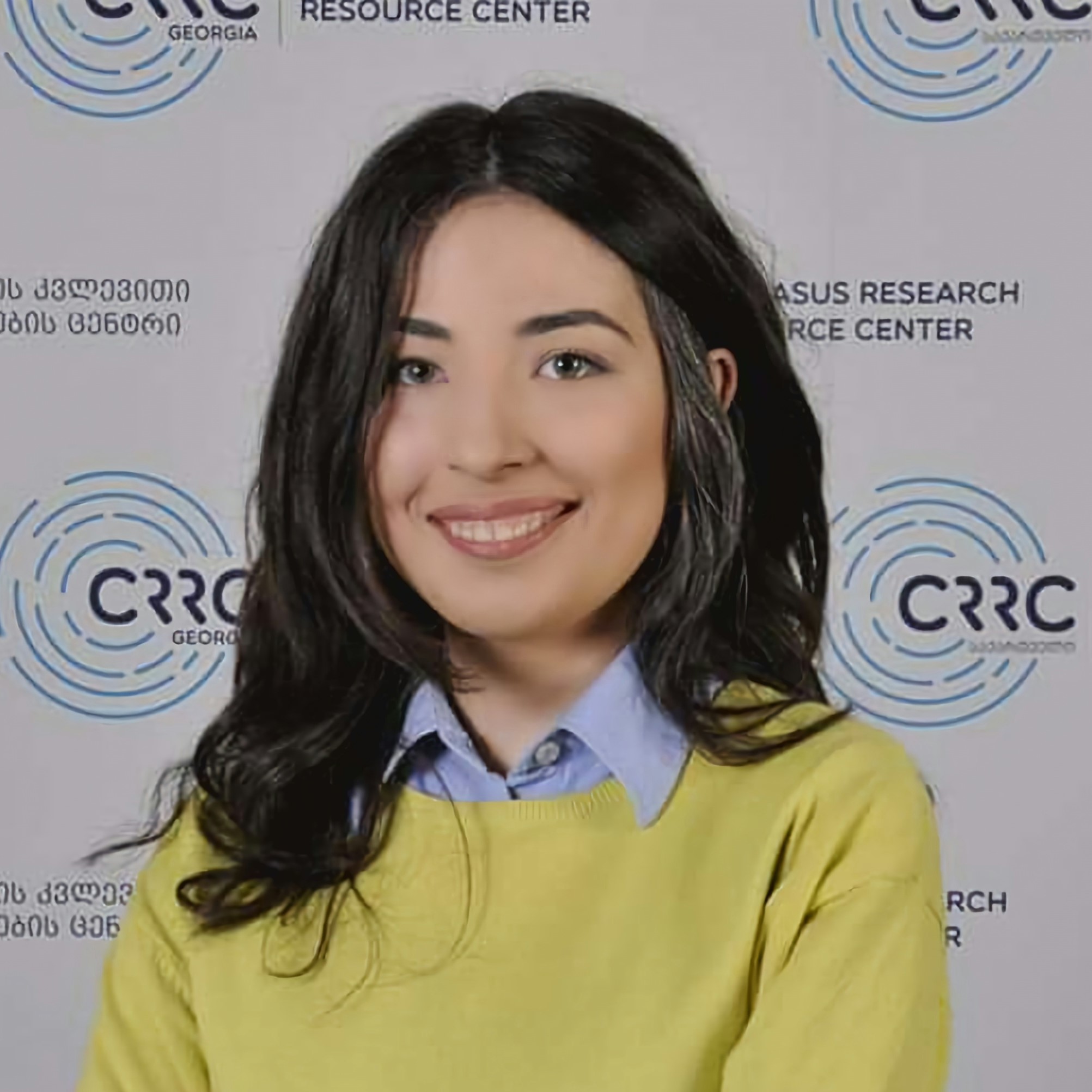 Tamuna is a Senior Researcher at CRRC Georgia.