The first round of the 2021 municipal elections were short on substantive discussions of local issues. But with the second round coming, what does the Tbilisi public want from their local government?

Following the 30 October elections, the US Embassy in Tbilisi pointed out that a ‘lack of focus on local issues was a missed opportunity’. The OSCE, meanwhile, lamented that national political framing of the elections ‘overshadowed local issues’.

A new survey of nearly 3,000 Tbilisians which CRRC Georgia conducted with the support of the National Endowment for Democracy suggests that the local issues that the population of Tbilisi is most worried about are jobs, traffic, air pollution, and public transport.

Most people were satisfied with their utility infrastructure and unsatisfied with parking, their building’s appearance, and yards.

Even though unemployment is a national rather than a local issue, Tbilisi residents were most worried about the lack of jobs in the city.

A quarter (24%) of people living in Tbilisi named unemployment as the most important problem in their community. Aside from employment, the public named traffic, air pollution, and public transport most frequently. One in seven (13%) Tbilisi residents named traffic as the top problem, 11% reported air pollution, while 10% thinks public transport is the most important issue in the city. 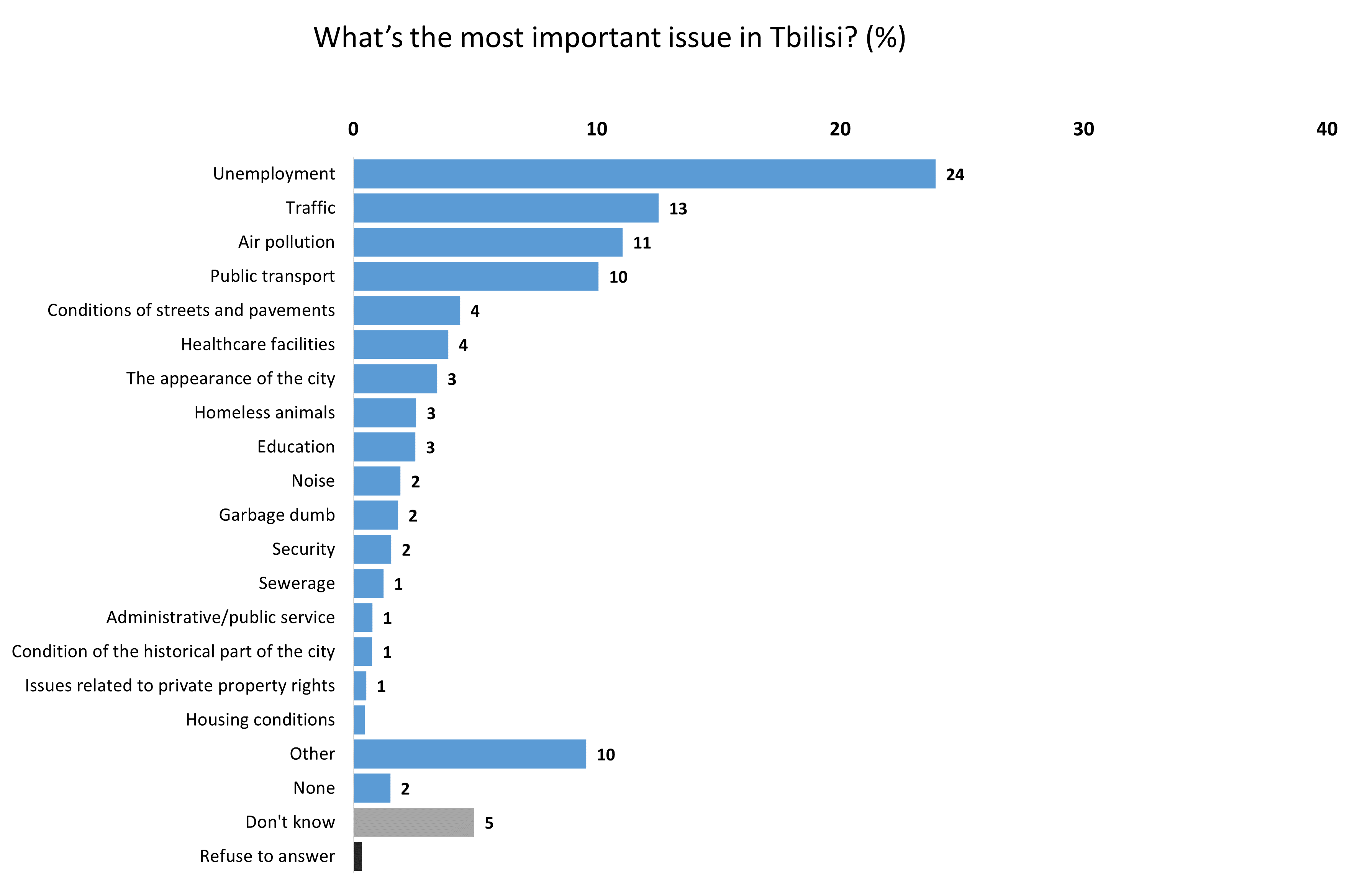 IDPs were significantly less likely to name air pollution as a key concern than non-IDPs. No other differences were identified on these issues between different groups.

On the other hand, people were most unsatisfied with parking, the condition of yards, and their building’s appearance. 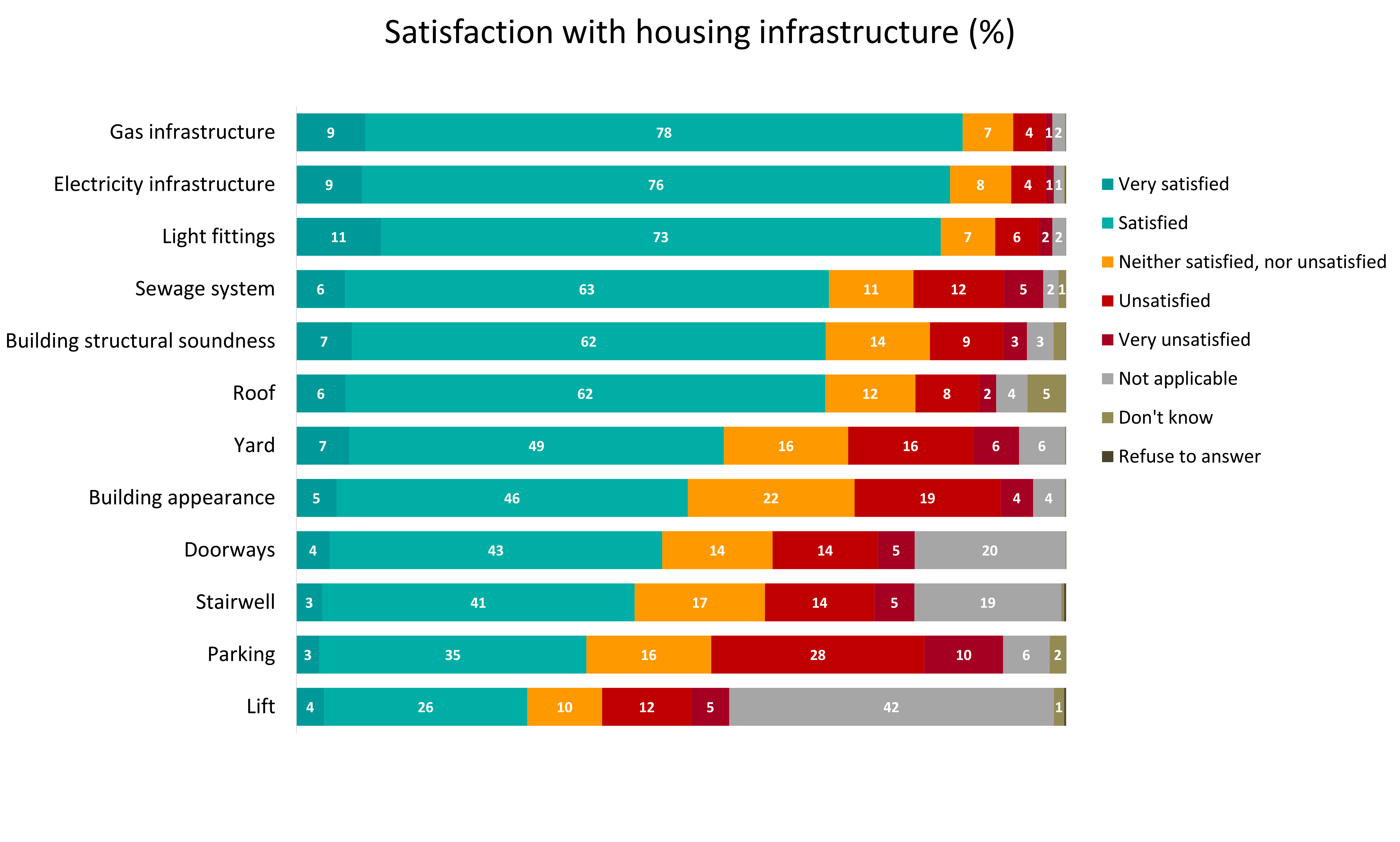 A simple additive index was created with the above 12 housing items, and regression analysis was conducted. The analysis suggests that men, people without jobs, supporters of the Georgian Dream Party, and people living in wealthier households were most satisfied, while women, employed people, supporters of the opposition or unaffiliated voters, and people living in poorer households were least satisfied with their communal infrastructure.

A plurality (45%) of Tbilisi residents said the situation regarding car traffic had improved over the last four years. A third believed it had gotten worse (34%), and roughly a fifth said it had not changed (18%).

Attitudes towards public transportation were more positive. Three in five Tbilisi residents (63%) said the situation regarding public transport had improved over the last four years. One in seven (16%) believed it had gotten worse, while 13% thought it had not changed.

Attitudes towards public transport were a partisan issue as well, with supporters of the ruling party being 33 percentage points more likely to say it had gotten better than opposition supporters. Aside from partisanship, people living in wealthier households had significantly more positive views than people living in poorer households.

As for bus lanes, the public tended to approve of more bus lanes, even at the expense of slowing car traffic. Roughly four in five Tbilisi residents (79%) were in favour of constructing new bus lanes, even if that would make transportation by private cars slower. Only 11% of Tbilisi residents said new bus lanes should not be constructed and that unrestricted car traffic was more important. Regression analysis suggests that men and car owners were less supportive of constructing bus lanes.

Overall, the survey showed that Tbilisi’s population was most concerned with jobs, traffic, public transportation, and air pollution.

As for communal infrastructure, people tended to be unsatisfied with their building’s appearance, the state of their yards, and parking.

Most people were satisfied with gas and electricity infrastructure and light fittings.

The public generally supports the construction of bus lanes and tends to think that the situation regarding car traffic as well as public transportation has improved over the last four years. However, there is a stark partisan divide with supporters of the Georgian Dream party significantly more likely than other groups of society to think the situation had become better in this regard.

Finally, Tbilisi residents would like their city government to play an active role in regulating the construction business.

Note: The above data analysis is based on logistic and multinomial regression models which included the following variables: age group (18-34, 35-54, 55+), sex (male or female), education (completed secondary/lower or incomplete higher education/higher), wealth (an additive index of ownership of 10 different items, a proxy variable), employment situation (working or not), IDP status (forced to move due to conflicts since 1989 or not), ethnicity (ethnic Georgian or ethnic minority), and party identification (Georgia Dream, opposition, no party/DK/RA).

The views expressed in this article are the authors’ alone and do not represent the views of NED, CRRC Georgia or any related entity.