The authorities in Nagorno-Karabakh are hoping to incentivise more people to settle in the sparsely populated areas of Nagorno-Karabakh to encourage economic growth and strengthen its sense of security. However, the unresolved conflict with Azerbaijan casts shadow on these plans.

Levon, who now resides in Yerevan, has been thinking of moving to Nagorno-Karabakh for over a year. He is 24 years old and studies at the National Polytechnic University of Armenia. A communications engineer by profession, he works in a private company alongside his studies.

‘I’ve always worked while studying; I’m a relatively well-trained specialist in my field. I earn enough money but I’ve decided to move to Karabakh in a year’s time. I’m currently studying for a master’s degree — if it weren’t for my classes, I would go right now’, says Levon.

When his relatives heard of his intention to move to Nagorno-Karabakh and realised that it was not just a whim, they tried to persuade Levon to change his mind. However, he has remained firm in his decision.

‘They say Karabakh is dangerous and that shootings happen there. I explain to them all, one by one, that this can happen to me in any part of the world. One can’t run away from fate and I feel that my future is there’.

Levon has already planned where he will live — the town of Karvachar in the Shahumyan Province. After visiting the town a few years ago and falling in love with its nature, he began to think about relocating there permanently. He dreams of establishing a small community group and giving private lessons in communications and engineering to local children. He says the lessons will be free of charge. He is convinced that the Nagorno-Karabakh government will support his programme and provide a free space for the classes.

A legacy of war 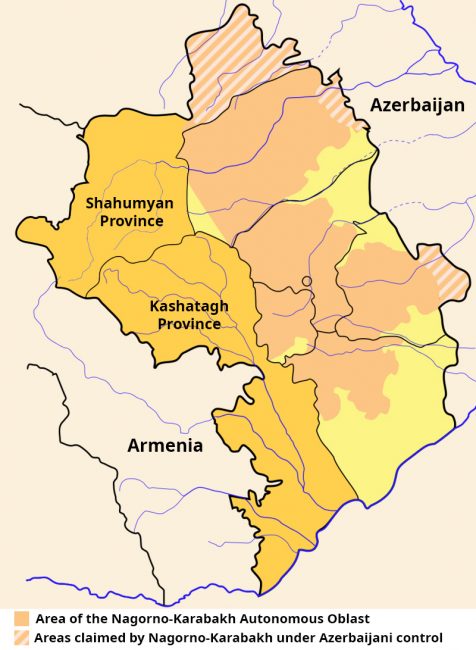 Karvachar is one of many settlements in the west of Nagorno-Karabakh that lost the majority of its population during the 1991–1994 war. The town’s registered population was just 500 in 2010 — a large drop from the 7,250 residents recorded in the 1989 Soviet census. The town was populated by an ethnic-Azerbaijani majority before the war broke out.

As one of the legacies of the war, these are currently the most sparsely populated areas of modern Nagorno-Karabakh, which is mono-ethnically Armenian.

Since 1993, those prepared to resettle to Nagorno-Karabakh have benefited from a relocation package from the authorities. Every year the scheme is updated and the benefits are enhanced.

‘We give [financial] incentives for land cultivation and cattle-breeding to those who move to [western] Karabakh’, explains Elina Mkhitaryan from Nagorno-Karabakh’s Territorial Administration and Resettlement Department. ‘Their relocation costs are also paid for — there are financial allocations to cover different needs’.

Under this state-funded scheme, resettled families can also receive assistance in setting up small businesses.

‘Our goal is to stimulate the economy and as far as possible create normal living conditions for the resettled families. We want the residents of Karabakh to feel safe and live in secure and decent conditions’, says Mkhitaryan.

According to her, the government has already achieved some success in this regard. She cites the example of one Armenian-Syrian family who lived in Nagorno-Karabakh for a period before moving to Australia. After some time they decided to return to Nagorno-Karabakh and have now settled in the Kashatagh District permanently.

‘We are pleased with the fact that there are already 76 Armenian Syrians living in Kashatagh today. We are convinced that their number will increase. I want to emphasise that everyone is eligible to avail of the relocation scheme whether they are those who left Karabakh because of the war, those who are residents of Armenia, or those [ethnic Armenians] who have come from another country’, Mkhitaryan says.

The government of Nagorno-Karabakh declined to disclose to OC Media how many people have settled in the Shahumyan and Kashatagh districts since 1993.

‘We are not afraid of war’

Twenty-eight-year-old Lilit Tonoyan’s parents moved to Nagorno-Karabakh from Armenia’s Armavir Province 20 years ago. They now live in Goghtanik, a village of 100 people in Kashatagh Province.

‘My parents are teachers. In 1998 they came here to teach, so we stayed. At that time, the authorities provided us with a house. In all that time we’ve been benefiting from the social assistance programme — electricity costs are partially subsidised and water is free of charge. Unfortunately, the village does not yet have a gas connection’, Lilit tells OC Media.

Lilit is currently teaching at Goghtanik’s school; she is a biophysicist by profession. Apart from teaching, for the past half year, Lilit has also been producing organic soaps. With the profits she makes from selling her soaps, she plans to set up a youth centre in the village for her pupils.

Lilit sees her future in Nagorno-Karabakh. Even the violent escalation of 2016 didn’t make her think of leaving.

‘During the April [2016] war, I didn’t once think of leaving my homeland. Life here continued as normal. I was going to my classes, doing my job, and everybody was doing the same. We are not afraid of war here’, she says.

From Syria to Nagorno-Karabakh

‘I’ve been in Yerevan for four years now. I came from Aleppo and I left everything there: my house, my business. I was engaged in dried-fruit production. The war destroyed everything I’d built up over the years. I started from zero here; we live in rented accommodation. I don’t consider it realistic to buy a house now, as we don’t have enough money’, says 45-year-old Tigran, an ethnic Armenian who fled the war in Syria with his wife and daughter.

[Read on OC Media: ‘I will not go back’ — The Syrians making a new life in Armenia]

Since the war in Syria began, over 17,000 Armenian-Syrian refugees have settled in Armenia. For some of them, the idea of building a new life in Nagorno-Karabakh seems an attractive prospect.

Tigran works as a taxi driver in Yerevan. He has fully integrated into Armenian life and actively follows the political affairs of the country. He starts his day by listening to the news on the radio. It was through a news broadcast that he learned about the Nagorno-Karabakh resettlement scheme. He is now thinking of moving there. He says it will be easier to live there than in Yerevan.

‘We receive state assistance [as refugees] in Yerevan, we get support, but the prospect of Karabakh seems more attractive. I want to go, take some land and cultivate it, and slowly return to my previous line of work. I’m trying to persuade my wife, she’s still frightened by the war. She says: “What if we go and the situation escalates; what will we do? Will we escape again?” ’.

Seyran Ohanyan, who has served as defence minister of both Nagorno-Karabakh (1999–2007) and Armenia (2008–2016) sees the resettlement programme as an important part of  Nagorno-Karabakh’s defence.

‘The resettlement of Karabakh is very important. So far, many large projects have already been carried out, but I think for a fully successful outcome we [in Nagorno-Karabakh] need the support of the Armenian government and the Diaspora’, notes Seyran Ohanyan in an interview with OC Media.

According to Ohanyan, from a defence perspective, the resettlement scheme will enhance the security of Nagorno-Karabakh’s border with Azerbaijan as soldiers manning the frontlines will have populated settlements behind them to provide support instead of empty villages.

A veteran of the 1991–1994 war with Azerbaijan and native of the town Shushi, which is a part of modern-day Nagorno-Karabakh, Ohanyan played a large role in the project to fortify Nagorno-Karabakh’s physical boundaries in the early 2000s which provided it with greater capacity to repel potential attacks from Azerbaijan. The next step in enhancing security, he says, is to populate the lands which have remained empty since the war.

Hostage of the war

The elephant in the room is that the resettlement policy could affect the potential return of Azerbaijani refugees to their former homes in Nagorno-Karabakh, which is still considered an option in the currently stalled peace process.

Alvard Sargsyan, an independent researcher and leading specialist in Nagorno-Karabakh’s Ministry of Education, told OC Media there was ‘no peace process’ to be affected by the resettlements, as ceasefire violations happen daily and the negotiations are frozen. She said that Nagorno-Karabakh’s independence was ‘irreversible’ and there was no reason for the authorities not to settle people ‘in our historical fertile lands’.

‘Karabakh’s historical lands, which had been isolated for more than 70 years, were liberated. These lands are rich in water and are suitable for agriculture. So, a state policy was devised to settle refugees in the liberated lands. […] Currently, there is a new stage of immigration, which is mostly due to the revolution in Armenia’, Sargsyan told OC Media.

According to Bakhtiyar Aslanov, former head of peace and conflict research at the Baku-based Humanitarian Research Public Union, settlement of civilians in any conflict zone, on either side of the frontline, puts them in danger and constitutes a violation of international human rights and humanitarian law.

Additionally, he says settling people in territories that are on the agenda of peace negotiations could further destabilise the region and lead to a loss of civilian life.

‘Such large-scale actions by the Armenian side make Azerbaijan worry and might negatively impact the peace talks. Azerbaijan might use different methods, including force, to stop such plans’, Aslanov said.

Aslanov also pointed out that if a peace agreement is signed and all internally displaced persons (IDPs) and refugees return to their homes in Nagorno-Karabakh, property disputes will emerge in the territories populated by Armenian settlers.

‘There will be many cases of violation of property rights, which may lead to new community clashes or conflicts between Armenians and Azerbaijanis’, Aslanov said.

Edgar Khachatryan, director of Armenian peacebuilding group Peace Dialogue, agrees that the resettlement ‘can’t have a positive impact on the peaceful settlement of the Nagorno-Karabakh conflict’.

‘These actions speak to the fact that the Armenian side is not going to make any territorial concessions in the foreseeable future’, Khachatryan said.

He says that ‘the resettlement of Artsakh implemented by the de facto authorities of Karabakh’ were primarily motivated by security concerns, something that ‘officials have repeatedly talked about’.

This, he says, ‘is a direct consequence of the absence of mutual trust between the sides’.

‘That is, I think that such resettlement programmes would be pointless if not for the militaristic statements continuously voiced by official Baku and the ever-increasing threat of the resumption of war.’

All place names and terminology used in this article are the words of the author alone, and may not necessarily reflect the views of OC Media’s editorial board. The author thanks the editorial team for contributing to the report.