Lezgins are one of five major ethnic groups living within Azerbaijan. The population of Lezgins makes up approximately 2% of the whole population of Azerbaijan. Their religion is Islam, and their language is Lezgi. Historically, Lezgins  have inhabited  the beautiful Caucasus Mountains between the Black and Caspian Seas. Part of the ethnic group is living in Dagestan, Russian Federation and another is beyond the border with Russia in the north-eastern part of Azerbaijan; Qusar, Quba and Khachmaz. However, the western part of Azerbaijan in Zaqatala and Balakan regions are also populated with many ethnic minorities including Lezgins.  The UNHCR states that Lezgins make up 40% of the population of the Qusar and Khachmaz regions and that Greater Baku is 1.8% Lezgin.

Balakishiyeva Destegul, 82, has been living in the Urva, Qusar region all her life. Despite that she was studying in an Azerbaijani school, she does not remember the language. Local Lezgis are speaking in their native language, that's why the older generation can easily forget the national language.

Today the main language is Azerbaijani or Russian. In Qusar, Lezgin is taught as a foreign language in schools. Lezgin textbooks come from Russia and teachers complain that they are not adapted for contemporary teaching. These programs were implemented up to 20 years ago in the Qusar region. The Lezgi language was most valued for home life and communication within Lezgi-majority villages. Azerbaijani, as the state language, was considered important for communicating with Azerbaijani-speaking neighbours, for finding work and for participating in the republic as a whole.

Despite how Lezgis get their education in Azerbaijani or Russian language, they tend to speak to each other in the Lezgi language. Subsequently, in the most Lezgi families the language of communication is in Lezgi.

Most people said that while it was not necessary to speak Azerbaijani in order to be able to find work in their villages, Azerbaijani was necessary for working in other parts of the republic. Nonetheless, Russian is perceived to be less important than either Lezgi or Azerbaijani. Russian was also seen as less important for economic purposes, with the exception of younger and middle-aged men who go to Russia to find work. People had difficulty estimating what percentage of the men from their villages go to Russia for employment. The Lezgi language was most valued for home life and communication within Lezgi-majority villages. Azerbaijani, as the state language, was considered important for communicating with Azerbaijani-speaking neighbours, for finding work and for participating in the republic as a whole. 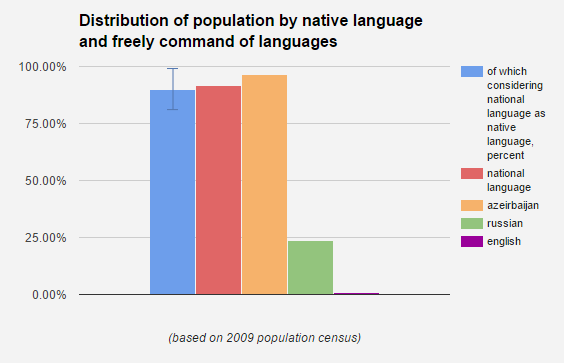 The oldest man in the village.

Mamed-Rasul, 90, is an ethnic Lezgi who lives in the village of Urva and considers himself to be the oldest man in this village. Mamed-Rasul does not remember the Azerbaijani language due to the fact that everyone in this village speaks Lezgi.  Mamed-Rasul lives alone in his big house. His children are living not far from him and come to visit him very often. Mamed does not want to leave his house due to all his life, which he has spent in this house in the village Urva.

Most Lezgians marry within their own clans, and the elderly women are very influential in such decisions. The Lezgian women are famous throughout the Caucasus for their woven carpets and delicious bakeries. These fine carpets can be easily recognized by their geometrical designs. As all people in the world, their bread is considered to be the main food staple. One of the most famous types of bread is Khran Fu, which you can find on every Lezgi's table.

The economy in this region is primarily based on food processing (meat, cheese, butter), leather working, and textile production. Most households survive from family member’s remittances sent from Russia; according to one journalist, the majority of the working population is in Russia. All family ethnic groups have strong marriage, family ties and trade relations with Dagestan, Russia.

Lezgi women are considered to be as the hard-working ones. Attitude towards women was quite contradictory throughout the history.  The woman was highly respected in the community, but at the same time has no rights in the family, even toward their own children. Man treated her as a lower human, the main burden of domestic work was on the woman's shoulder: the preparation of clothing, food, keeping all kinds of economic affairs, and more.  Even today, women in this region are doing any kind of house affairs. Despite the severe weather conditions in this region, women have to go to the nearest lake for collecting the water. Due to many people have no opportunity to set the water tank in the houses, women have to bring water 6-7 times per day.