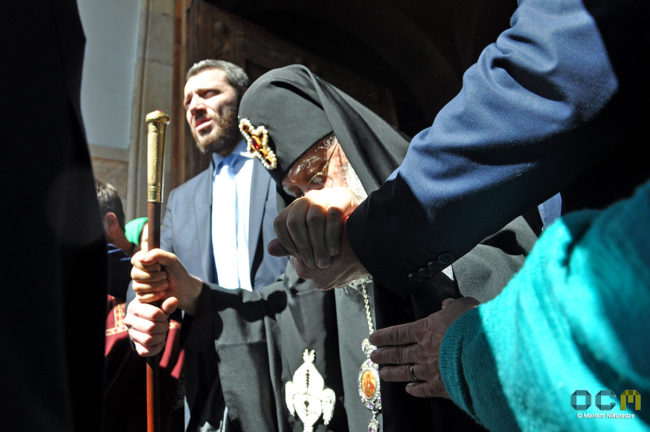 Leaders of Georgia’s ruling Georgian Dream party have said that they may consider turning Georgia into a constitutional monarchy, after the head of Georgia’s Orthodox Church Patriarch Ilia II suggested it during an 18 June sermon.

‘We could think of Georgia as the oldest monarchy’, Ilia II said, adding that ‘this [a shift to constitutional monarchy] cannot happen today or tomorrow, but we must analyse the past, present, and future’.

Parliamentary Chair Irakli Kobakhidze met the Patriarch on 19 June with parliament’s Legal Issues Committee Head Eka Beselia to discuss the initiative. Beselia confirmed that it would be possible to hold a plebiscite on the issue, adding that the Patriarch’s initiative is a ‘notable idea’, but that ‘people need to understand the idea first’.

Kobakhidze said earlier on 19 June ‘what His Holiness has said is truth’ and that ‘constitutional monarchy brings peace in political and state life’. He made no additional comments after the meeting.

Parliament’s Deputy Chairman Giorgi Volski said that ‘monarchy would bring positive changes to Georgia’, but added that ‘no prospects are visible in the near future’.

The initiative has come under intense criticism from opposition and civil society organisations. ‘Constitutional Monarchy cannot and will not be restored’, Gigi Ugulava, from the opposition European Georgia party said.

Roman Gotsiridze from the United National Movement said on 19 June that ‘restoration of monarchy means restoration of the institution of nobility’ calling the initiative ‘regressive’.

The comments come as Georgia’s government, which enjoys a constitutional majority in parliament, is implementing sweeping changes to the country’s constitution and are now discussing the amendments in parliament. One of the amendments envisions shifting further powers from the presidency to parliament. The government argues that as Georgia strives to entrench the model of a parliamentary republic, the president’s powers should be restricted. However, a number of civil society groups and opposition parties have accused the government of trying to rid themselves of resistance from a president who they say is a counterweight to the government’s constitutional majority.

No-one from the government or the Constitutional Commission had previously talked about restoring the monarchy during the period of the public hearings into the constitutional reforms.

‘Generally, a constitutional monarchy excludes the existence of the institutions of the president’, Kobakhidze said on 19 June.

Non-parliamentary opposition party Girchi said that ‘monarchy is one of the darkest periods in the history of humanity’ and claimed that the initiative is yet another distraction from the ongoing constitutional amendments.

The Bagrationi Dynasty was deposed from the Georgian throne following Georgia’s annexation to the Russian Empire early in the 19th century. There are claims that branches of the dynasty have survived to this day. Restoration of the monarchy has been raised periodically since the late 2000s, mostly by fringe political parties and conservative movements within the country.