Georgia’s Constitutional Court has suspended a moratorium on purchasing agricultural land by foreign citizens. While the court ruled the ban was unconstitutional, the suspension will only be temporary as constitutional amendments are set to kick in. Foreign citizens now have nine days left to register land they have bought or inherited.

The Constitutional Court announced its decision on 7 December, after being approached by two Greek citizens who were unable to register agricultural land they inherited. They also argued they were prohibited from buying such land in the future, both of which they said contradicted Article 21 of the Georgian Constitution.

In practice, the lifting of the ban will only be temporary as a new constitution which will enter into force after the inauguration of the new president includes the prohibition on the sale of agricultural land to foreigners.

The ban was included in the new draft constitution on the initiative of 116 MPs from the ruling Georgian Dream party in 2017.

The new constitution says that agricultural land is a ‘resource of exceptional significance’ and can be owned only by ‘the state, a self-governing entity, a citizen of Georgia, or a union of Georgian citizens’. It says exceptions can be made by adopting organic laws.

How Georgia banned the sale of agricultural land to foreigners

In June 2017, Speaker of Parliament Irakli Kobakhidze announced that draft constitutional amendments would allow only citizens of Georgia to buy agricultural land. He said this would protect Georgia’s ‘national and strategic interests’.

‘Georgian land should only remain in the joint property of the Georgian state and its citizens’, Kobakhidze said.

Far-right groups such as Georgian March had long demanded the government ban land sales to foreigners.

A number of civil society groups in Georgia have been critical of the ban, claiming it would be an obstacle to Georgia’s agricultural development.

MPs soon announced they would initiate a moratorium on foreigners buying agricultural land before the draft amendments come into force. The moratorium was adopted on 16 June 2017.

How much Georgian land do foreigners own

According to a 2017 report by the State Commission on Migration Issues, data from the public registry showed that in 2012–2016, foreign citizens registered ownership of land and property 34,000 times, of which around 13,000 were for agricultural land.

‘Among the foreign citizens investing in real estate in Georgia, citizens of Georgia’s neighbouring countries (Russia, Ukraine, Armenia, and Azerbaijan) stand out. Presumably, a part of this group consists of former Georgian citizens who emigrated to these countries and are willing to retain stronger links with Georgia through investing in property. The same may be partly true for US and Israeli citizens’, the report said. 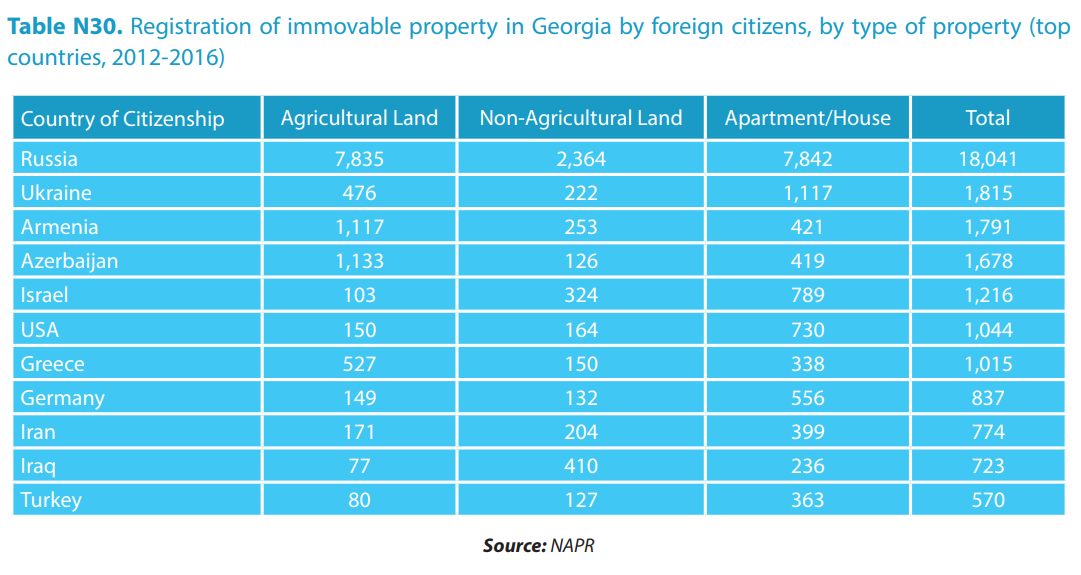 According to a EF/CRRC survey on ‘Knowledge of and Attitudes toward the EU in Georgia’ conducted in May 2017, 64% of Georgians think that land in Georgia should only be owned by Georgian citizens no matter how they use it. The share had increased by 21 percentage points since 2015.

People living in rural areas were least favourable to the idea of foreign ownership of land, with 74% strongly believing that only Georgian citizens should own land in Georgia.

[Read more about who supports land ban for foreigners on OC Media: Analysis | Opposition to foreign ownership of land is on the rise in Georgia]