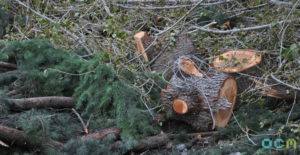 Between 2013 and August 2016, Tbilisi City Hall issued 583 permits to cut down 3,552 trees in the city, according to a report from the Institute for the Development of Freedom of Information (IDFI). The findings raise questions about the integrity of the city hall's processes for examining trees and assessing damage.

The report raises questions about the increased number of trees being cut due to ‘damage’, which was over five times as high in the first nine months of 2016 compared to the totals for previous years.

The IDFI requested information from Tbilisi City Hall about permits issued to construct residential and commercial buildings and for cutting down trees. According to the information they received, in the same period of 2013–2016, 1,747 permits were issued to build apartments and multifunctional buildings.

Some of the documents from City Hall do not specify the reasons for allowing trees to be cut.

‘For example, on August 2, 2016, a company called Orbi Group Tbilisi Ltd. was permitted to cut down 44 and transplant 4 trees from its property on Kazbegi Street’, the IDFI writes.

‘The permit does not specify the purpose for this action. However, since Orbi Group is a construction company, it can be assumed that this purpose was construction.’

Of the 583 permits for the removal of trees issued 2013–2016, 392 specify construction as the reason for issuing the permit.

Damaging or removing trees without permission is an administrative offence in Georgia, carrying a possible ₾500 ($185) fine and the ‘confiscation of the object of the offence’.

4. ‘Misha must survive!’ — Saakashvili supporters rally for his release

5. Datablog | How has Georgia changed in the last decade?