Every Easter, people in Shukhuti, a small village in Guria, western Georgia, clash in the centre of the village over a heavy, 16–17 kg ball. This tradition, a kind of game of honor, is called Leloburti. Shukhuti is divided into two parts — Zemo (upper) and Kvemo (lower) Shukhuti — both of which field teams which clash every year.

Streams flow through both Zemo and Kvemo Shukhuti, both 130 meters from the centre of the village. The only rule in the game is that each team must get the ball to their stream. As soon as the ball reaches one of the streams, the game is over.

The ball, which is newly created every year, is taken to the grave of a person who died in the past year in either Zemo or Kvemo Shukhuti, depending on who wins the game.

The day is long. No one really knows when this tradition began, but according to most claims, Leloburtis is at least 300 years old. Every Easter Sunday, people gather in the early morning in the garden of a house in the village centre.

A small Easter supra (feast) is held with eggs painted in red, paska (easter cake), khachapuri, mtsvadi (barbequed meats) and lots of wine. Wine is an important part of the day.

Saba Zhghenti, archpriest of the local church, is one of the main figures of the day. He manages much of the event, and he is the one to start off the day. He is the head of the supra and the one who pours the wine into various strange vessels.

At first, the leather of the ball, which is yet to be filled, becomes a vessel; then it is a jar; a pitcher; a roof tile; a bowl, and the base of the trophy. Saba says a long toast and invites everyone to drink. The majority of people are photographers, journalists, and tourist, as well as locals of Shukhuti.

There is a stereotype among Georgians that people from Guria have the best sense of humour, and archpriest Saba could serve as a good example of this, as he interacts with people, telling jokes, sometimes quite unusual jokes for a priest.

‘God, I hope the bishop won’t see tapes of what I am saying here. “Where did I find this man and how could I make him an archpriest”, he would say’, Saba said before drinking another bowl of wine. For almost twenty years Saba has managed the tradition of Lelo.

Meanwhile, several people are sitting near Saba trying to fill the Lelo ball. The contents of the ball are quite simple: mostly sand and sawdust. If that’s not enough, Saba will add some wine and then it’s ready. This year the ball weighed 18.1 kg.

When the ball is ready, people wash it, pose with it, and give it to archpriest Saba, who will take the ball to the local church, which is also close to the village centre. The walk to the church can also be fun, as Saba throws the ball to people so that they can feel how heavy it is and how challenging it will be to win the game.

A little fun with throwing the ball here and there continues in the churchyard. Then the priests take it inside. They will recite a chant and then the ball rests there until 17:00. 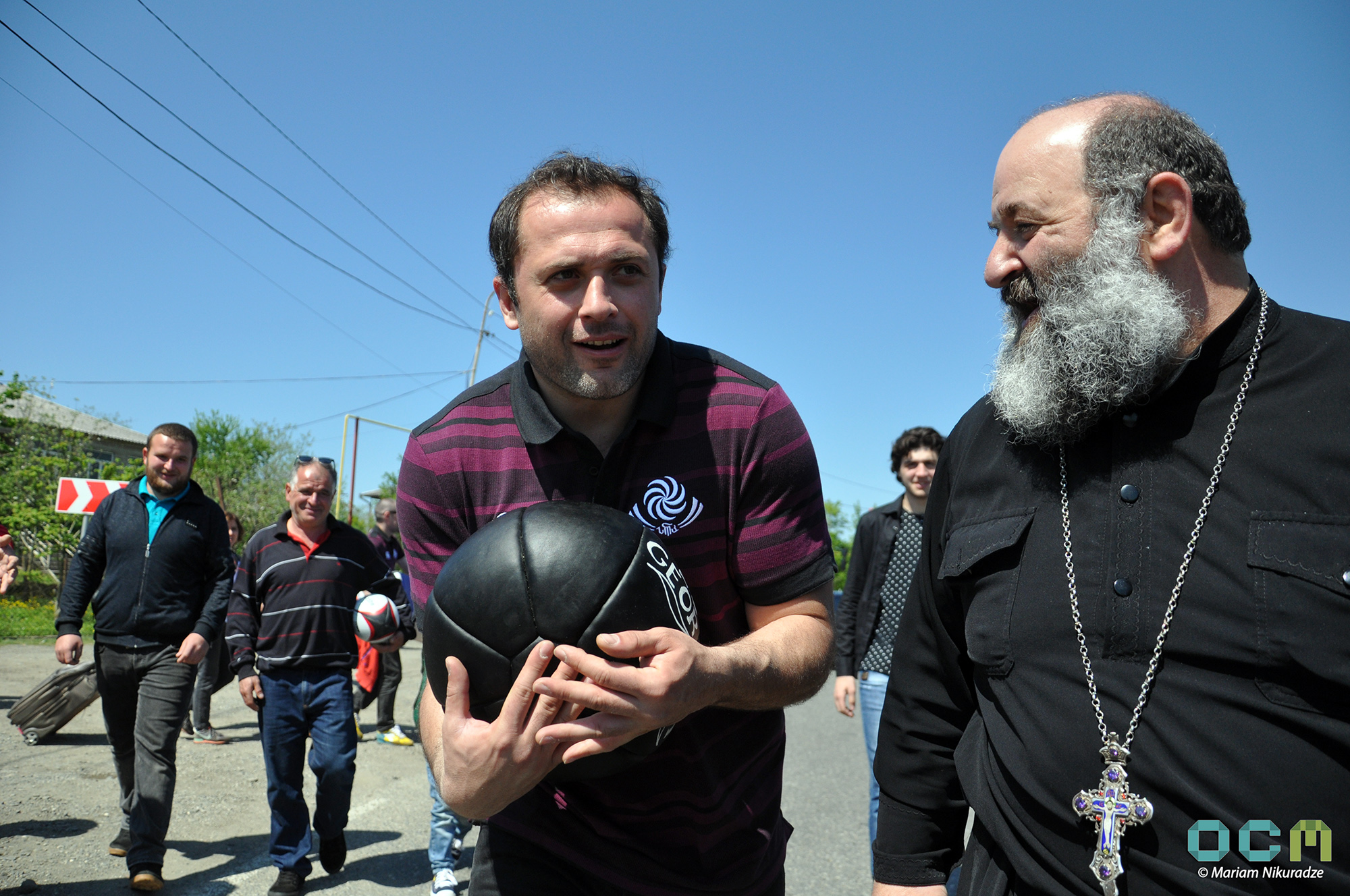 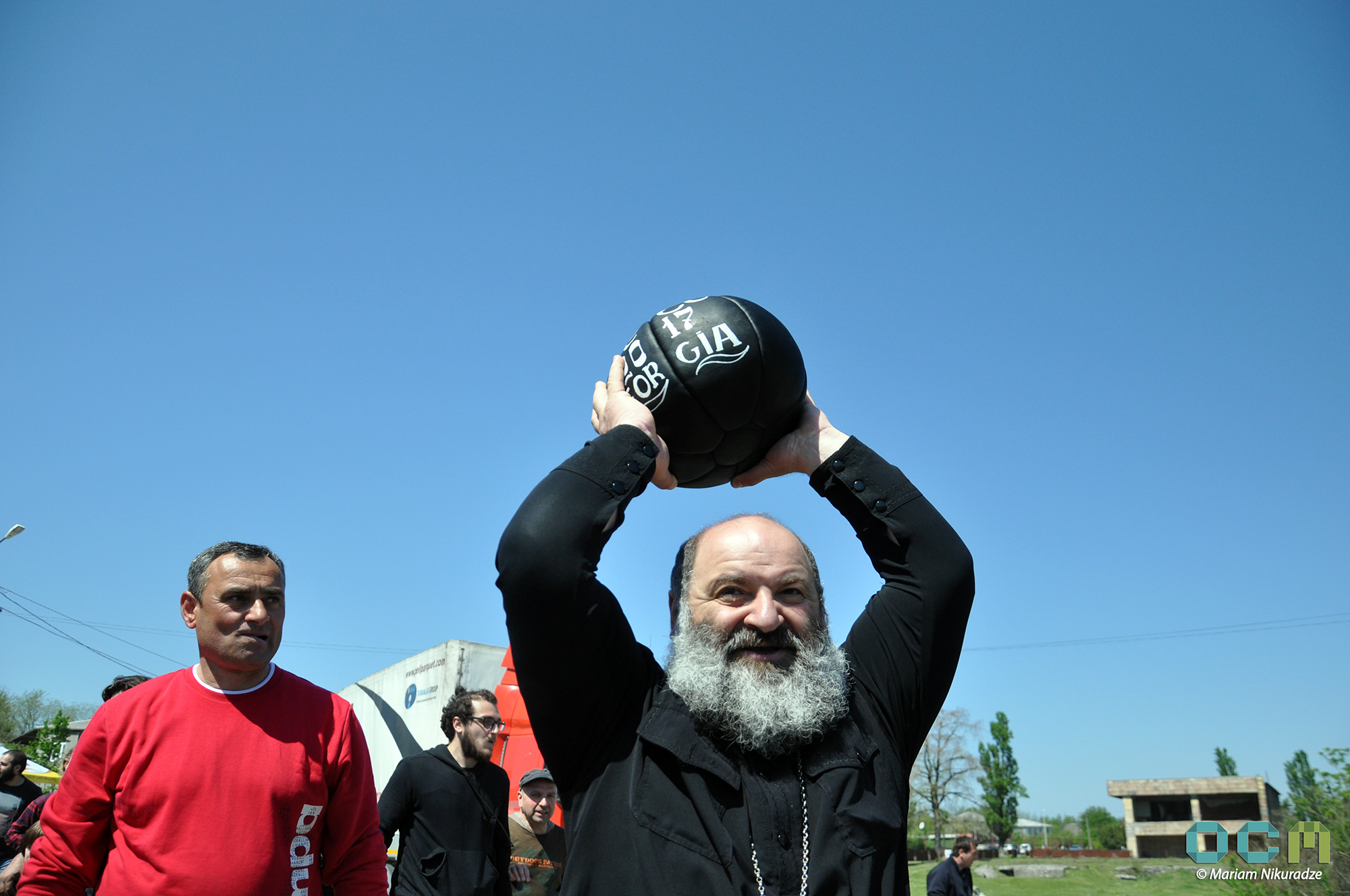 Some people continue to drink at the Easter supras, while the local municipality holds various cultural and sports events in the village centre. Children compete in chess, men in backgammon, there is a lot of singing, dancing, and wrestling.

Some people follow another Easter tradition, by bringing food to the graves of relatives who have passed away.

Irakli, 76, came to visit the grave of his best friend and is upset that someone has stolen decorations from the tombstone. But he is still in a good mood. He boasts that he used to play Lelo for almost his entire life, before he broke his knee three years ago. Now he spectates from the sidelines, supporting teams from Kvemo Shukhuti.

Temur came alone to see his parents’ and relatives’ graves. He brought wine, paska, and eggs, asking everyone to taste his wine. 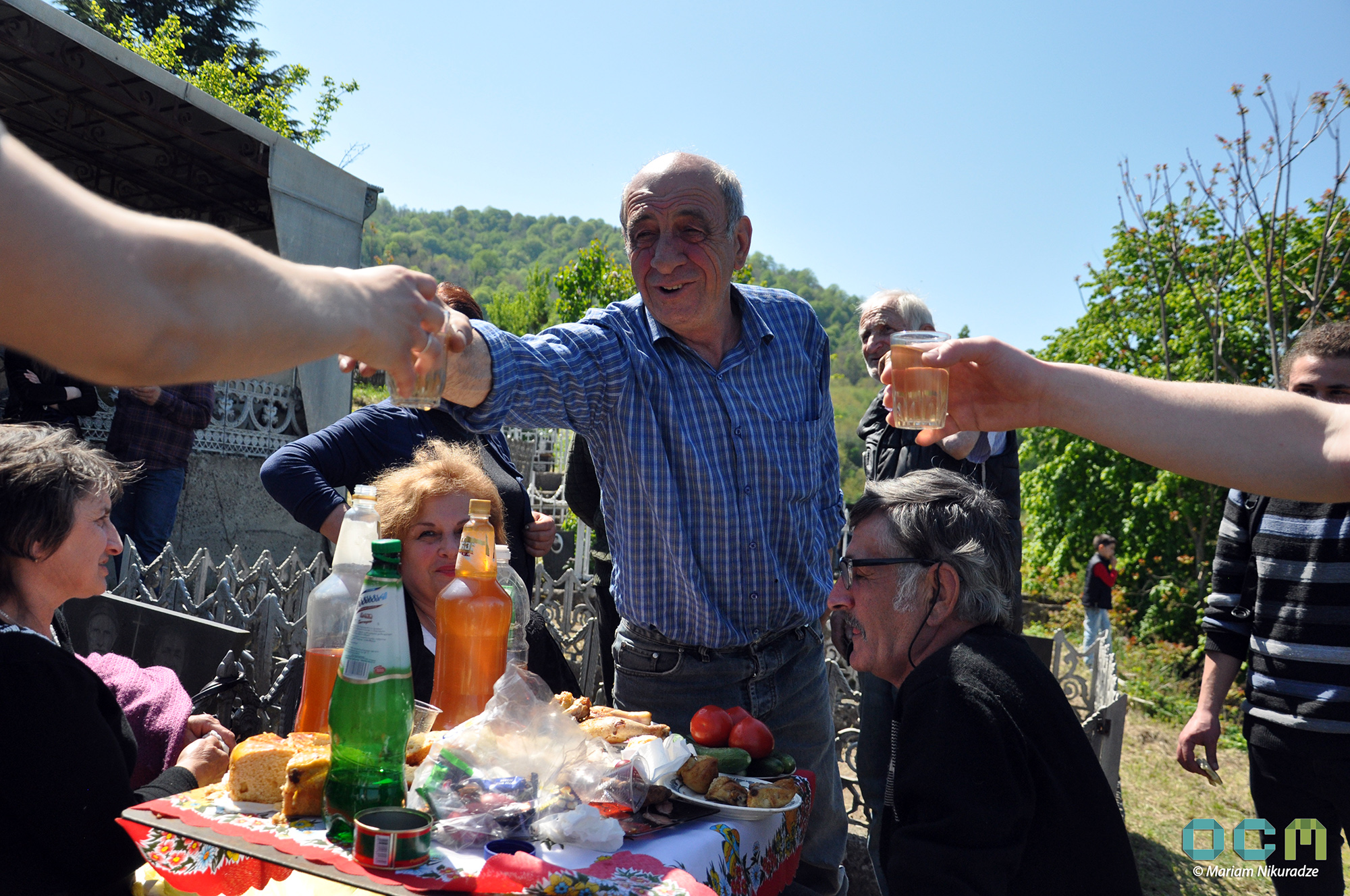 ‘My children and grandparents don’t like coming here. They are coming more seldom, even if it is Easter or New Year. I don’t blame them. There is a better life in the city I guess, but I still like it here’, he told us, adding that he plans to watch the Lelo in the evening.

By 17:00, most people are already drunk. Some of them are really nervous, others are excited. The two teams gather separately, discussing their strategy for the game.

Tamaz, 45, tells us that he used to watch his father play when he was a child.

‘People had wooden fences back then. After the game there would be no fences left in the village centre. This game can be really brutal’, he said, adding that sometimes the game lasts for several hours.

It’s almost 17:00; Archpriest Saba holds the ball tightly in his arms. He is accompanied by several men, who help him to make his way through the crowd of people. But it will be tougher for him to get out of the crowd after he throws the ball in the air. One of the men holds a gun; he will give the signal to start the game.

Saba throws the ball into the air; this is the last time the spectators will see the ball for the rest of the game. It’s hard to tell where it is, who holds it, how it travels from one spot to another. There’s layers of mostly men in the middle of the game trying to grab it and take it closer to their stream. This doesn’t mean that women aren’t involved. Almost the entire village is outside. Women support their family members and sometimes head right into the crowd to help their team to win.

It is dangerous to be in the middle. A young man fainted and was injured in the very first minutes of the game. When something happens men raise hands in the air indicating each that something is wrong, when the danger is over the crowd moves away.

Two years ago a man died of heart failure during the game. According to RFE/RL, Gocha Pirtskhalaishvili was still alive when he was taken from the crowd, but doctors failed to save him. Lelo continued.

This year, according to some local residents, was a record breaking year — the game ended in just 22 minutes. The team from Zemo Shukhuti won the game. There was a great vibe among the team, as they kept yelling the name of their friend Mamuka, a 25-year-old man, who died in a car accident. His friends had sworn that they would win Lelo for him, and take the Lelo ball to his grave. And so they did.

As soon as the team reached the stream with the ball, the victory celebrations began. The team began to run in the street heading to the village’s small cemetery. They were yelling Mamuka’s name on the road, posing with the ball, kissing it, praising each-other for a good game. Some men are shirtless. They are covered in mud and sweaty. Some have stains of blood on their face and body.

A group of Mamuka’s friends cannot stop running, but the others finally found time to rest. Some are lying on the grass, others hug and kiss each other. Others left the centre disappointed.

Meanwhile the ball finally reached Mamuka’s grave. It was rolled over the ground, and a small feast was organised near the grave. Lelo is over now.

People used to play Lelo in several villages in Guria, but only in Shukuhti does it still take place. Every year more tourists come to see the game.

‘After all, people may understand that the true roots of rugby are here, in Georgia, not in England’.

The government of Georgia granted the status of ‘nonmaterial cultural heritage’ to Lelo in 2014.

Unable to return home, residents of Nagorno-Karabakh caught on the Armenian side of the Lachin blockade have temporarily settled near the border.