Final results are in

Preliminary results from 66% of ballots

Final results are in

Preliminary results from 66% of ballots

Results from all polling stations in Armenia are in:

We’re wrapping up our live updates for the day. Join us tomorrow for the latest on Armenia’s elections.

I Have Honour coalition: 5%

Kocharyan’s Armenia Alliance have released a statement suggesting they will not accept the results of the election.

‘As long as all the problematic issues have not received comprehensive explanations and suspicions have not been dispelled, the Armenia Alliance will not accept the election results’, the statement reads.

‘The published results of the parliamentary elections are highly controversial and do not inspire confidence.’

‘They are in extreme conflict with the various manifestations of public life that we have witnessed over the past eight months, with all the results of public opinion polls, including international ones, and finally, with common sense.’

They said that large opposition campaign rallies and the political crisis following the war ‘indicated the existence of a completely different public mood’.

‘The most serious reason for the lack of trust is the hundreds of warnings coming from different polling stations on the day of the election, which testify to the systematic, pre-planned falsification of the election results.’

The authorities and local observers have not noted significant irregularities in the voting.

‘While the first was the non-violent, velvet revolution, in 2021 a non-violent but a steel revolution took place’, he said at a press briefing.

‘The dictatorship of the law is the next mandate that the people have given us, and we cannot wait to use that mandate’, he added.

Pashinyan’s Civil Contract is currently leading strongly in the count across the country, with 58% of the vote. Robert Kocahryan’s Armenia Alliance stands at 19%. So far, 27% of ballots have been counted.

In Yerevan, Kocharyan is performing slightly better than nationwide, with the Armenia Alliance winning 26% of the vote compared to 44% for Civil Contract.

Only 9% of votes have been counted in the capital, so far.

Preliminary results from 642 of 2,008 polling stations with 20% of ballots counted.

I Have Honour coalition: 5%

Preliminary results from 347 of 2,008 polling stations are in and Nikol Pashinyan’s Civil Contract is leading with 61.4% of the vote. Robert Kocharyan’s Armenia Alliance is trailing on 17.3%, and Prosporous Armenia has 5.1%.

The Artur Vanetsyan-led I Have Honour coalition has 5.2%, short of the 7% threshold for electoral blocs to enter parliament.

Preliminary results from 176 out of 2008 polling stations have Nikol Pashinyan’s Civil Contract leading with  61.3% of the vote, Robert Kocharyan’s Armenia Alliance at 18.4%, and the Artur Vanetsyan-led I Have Honour coalition in third at 6%.

Pashinyan’s party won in the border village of Shurnukh, a part of which — roughly a dozen houses — ended up on the Azerbaijani side of the border after the war. There, Civil Contract won 51 votes and the Armenia alliance, 40 votes.

The preliminary results for around 500 Armenians living abroad, including members of the diplomatic service are in. Pashinyan’s Civil Contract won 36% ahead of 30% for Kocharyan’s Armenia Alliance. First President Levon Ter-Petrosyan’s Armenian National Congress came third with 9%. No other party won more than 4%.

As vote-counting is underway, there are reports of short blackouts in some parts of the cities of Vanadzor, Gyumri, Armavir, Dilijan, Artik, Aparan, and Alaverdi, as well as some villages in the Tavush, Syunik, and Aragatsotn provinces.

Counting is already underway nationwide. The first preliminary results are expected at around midnight and will likely continue to come in through to the morning.

No independent exit polls were conducted.

The final results will not be certified until a week later. If no party has a majority of 53 of 105 seats in parliament, they will have six days to form a coalition to form a government.

If no party is successful, a second-round between the two leading parties will be held on 11 July which will assign enough additional seats to the winners to have 54% of seats in parliament.

Armenian police report that they are investigating 141 instances of possible electoral violations. Of these, 47 may result in criminal charges. Violations included vote-buying, pressuring voters, breaking the confidentiality of the vote, and double voting.

An exit poll commissioned by Pashinyan’s Civil Contract has the party winning  50.2% of the vote. According to the poll, Kocharyan’s Armenia Alliance is in a distant second with 15.7%.

According to the exit poll the I Have Honour won 8.4% of votes and the Prosperous Armenia party 6.4%.

Polls have closed in the 2021 Armenian Parliamentary election.

Sum up of TV coverage of campaigns from 5–17 June

Armenia’s National Commission on Television and Radio published the monitoring results of the coverage of election campaigns by television channels and radio stations in Armenia. The monitoring includes both unpaid and coverage of campaigns and paid airtime bought by the candidates and their parties.

As the monitoring ended on 17 June, it does not include the day of Robert Kocharyan’s final rally of 18 June.

The campaign of Nikol Pashinyan’s Civil Contract Party was covered by the Armenian Public Television Broadcaster for around 10 hours, while Kocharyan’s Armenia alliance was on the air for 5 hours and 40 minutes. The paid airtime was almost equal for both parties.

The observer mission from the CIS Interparliamentary Assembly (IPA) did not register any serious violations, reported the mission’s coordinator Igor Komarovsky.

Daniel Ioannisyan, a representative of the Independent Observer, an election watchdog, wrote on Facebook that the group has informed law enforcement bodies of four apparent electoral violations.

In three cases, voters were allegedly not given ballots for Nikol Pashinyan’s Civil Contract Party.

In the fourth case, a Civil Contract representative allegedly threatened election observers at a polling station.

Hayk Sargsyan, an MP and a candidate for Nikol Pashinyan’s Civil Contract Party, has uploaded photos of unused ballots from the Robert Kocharyan-led Armenia Alliance. In text alongside the photo, he called the ballots ‘the rejected’. Police have said they are investigating.

According to Armenia’s electoral laws, the publication of such photos is illegal.

The highest turnout was recorded in Synik Province (33.4%), Tavush Province (29.8%) and Yerevan (29.3%) A recent poll commissioned by EVN Report had Kocharyan’s Armenia Alliance beating Pashinyan’s Civil Contract in both Synik and Yerevan.

Serzh Sargsyan: ‘Entire law enforcement system’ told to use force against us

Sargsyan refused to run as a candidate in the elections where his Republican Party is running in an alliance with Artur Vanetsyan’s Homeland Party in the I have Honour bloc.

Sargsyan has claimed that the ‘entire law enforcement system’ had been instructed to use force against them, he said that a more detailed statement would be released later today.

Edmon Marukyan, the head and the Prime Ministerial candidate for the Bright Armenia party, cast his ballot in Yerevan, saying that Armenia needed a government of national unity. Despite the call, he has previously ruled out going into a coalition with either Pashinyan or Kocharyan.

'I hope that solidarity, the restoration of peace will have no alternative for us because our challenges are much greater than we imagine. We must set aside our small truths for the sake of greater truth.'

Representatives of the Human Rights Defender visited Sisian to check ‘all the circumstances’.

Earlier, media reported that the party’s leader in the village of Parakar, in Armavir Province was apprehended by Police.

Gagik Tsarukyan, the leader of Prosperous Armenia party and one of the wealthiest men in Armenia, voted in the village of Arinj, Kotayk Province, and repeated that he has ruled out the possibility of forming a coalition with Pashinyan. He refused, however, to answer a question about whether he would go into a coalition with Robert Kocharyan.

Artur Vanetsyan casts ballot for a ‘prosperous and safe Armenia’

Artur Vanetsyan, the candidate for Prime Minister of the "I Have Honor" bloc that includes the Homeland party and former ruling Republican Party has voted, telling reporters that he cast the vote for a 'prosperous and safe Armenia',  and ‘for our great homeland, for Artsakh, and for the future of Armenia'.

Live footage is being broadcast from polling stations as a measure against electoral fraud. You can watch footage from every polling station in the country via: electiononline.am. 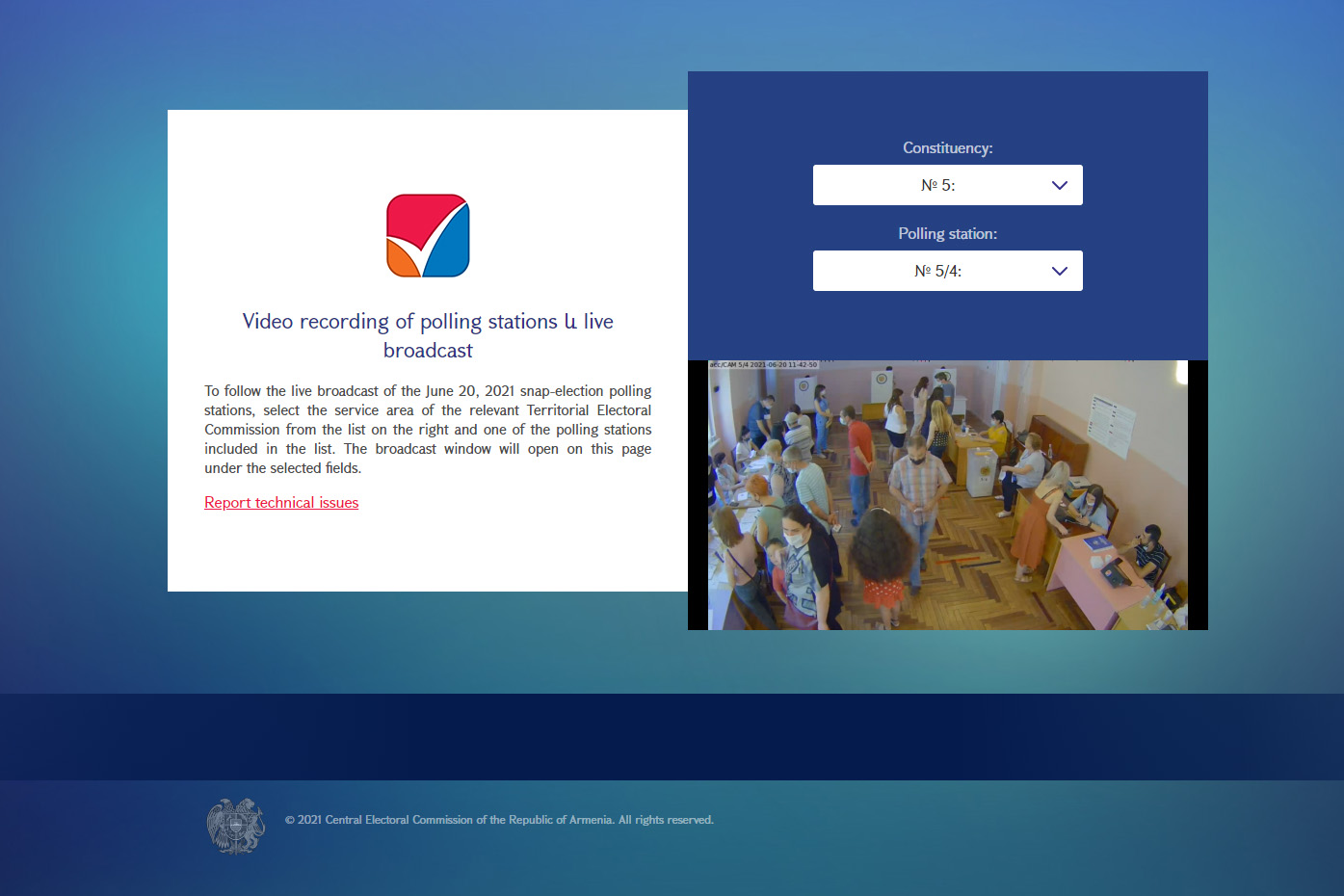 Embattled Acting Prime Minister Nikol Pashinyan has cast his ballot in Yerevan. Pashinyan did not give a comment to journalists.

After winning a landslide victory in the previous election in 2018, Pashinyan has seen his support plummet after Armenia lost the Second Nagorno-Karabakh War.

Arman Babajanyan, an independent MP and former member of the Bright Armenia Party who currently heads the For the Republic Party has posted on Facebook that someone shot at him while he was inside his car. No further details about the incident are available at this time.

A shooting with a gas pistol was also reported in the village of Azatashen, Ararat province. According to police, the shooting took place after a dispute between representatives of the Prosperous Armenia and Rise (Verelk) parties.

Robert Kocharyan, widely seen as the biggest challenger to the ruling party, has cast his ballot in the capital, Yerevan.

Kocharyan, who served as Armenia’s second president from 1998–2008, said he voted for ‘dignified peace and economic growth’.

Kocharyan's Armenia Alliance has promised a 'deeper integration' with Russia and proposes to increase the Russian presence in Armenia. Kocharyan has also floated the idea of an Armenian version of Russia’s Foreign Agent Law, with  'strict control' over 'foreign-funded organisations’ in Armenia.

Kocharyan heads the Armenia Alliance, an electoral bloc made up of the Armenian Revolutionary Federation (Dashnaktsutyun) and two other minor parties, Reborn Armenia and One Armenia.

He announced his comeback to politics in late January, stating his intention to become Armenia’s next Prime Minister. He previously supported the Homeland Salvation Movement which was formed by a coalition of over a dozen parties, including the former ruling Republican and ARF parties, in their aim to force Pashinyan to resign.

Polls opened this morning at 08:00. According to the Central Electoral Commission, there are 2,578,678 voters eligible to take part in today’s poll in 2,008 electoral precincts across the country.

5. The price of catching COVID-19 in Abkhazia