Opinions towards queer rights have improved among Georgia’s young people, the latest NDI/CRRC polling has found, with a plurality in support of their protection.

The balance has tipped, if only by a little.

Thirty-eight per cent of respondents aged 18–35 said that protecting the rights of ‘sexual minorities’ was important with 36% saying it was not. Twenty-one per cent answered that they were neutral on the question.

Overall, 27% of respondents of all ages said protecting the rights of queer people was important, with 44% saying it was not, a slight rise from previous years. 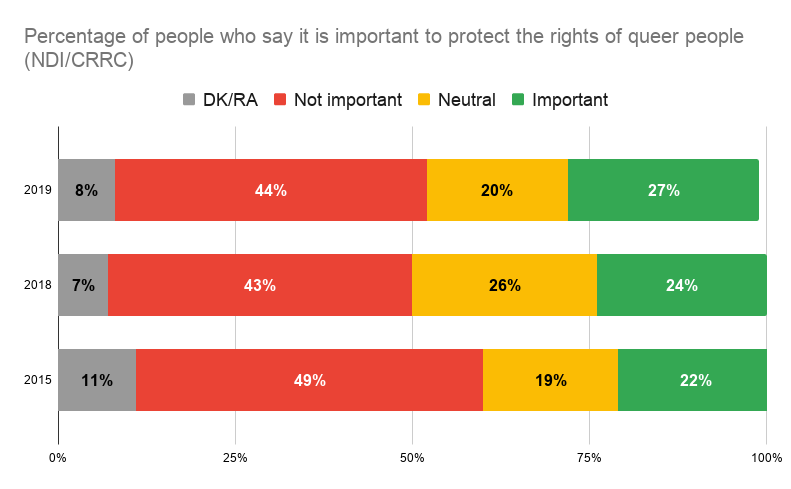 Mariam Kvaratskhelia, a queer rights activist and one of the organisers of Tbilisi Pride, hailed the increase in support from young people, saying it was ‘very promising’.

Kvaratskhelia told OC Media that their organisation was now starting to work with the parents of queer people to help ‘create a parents movement’. Support among those aged 55 and above fell slightly from 22% in 2018 to 18% in 2019, according to NDI’s polling.

‘We see this as an effective way to reach older people’, Kvaratskhelia said.

Dustin Gilbreath, Deputy Research Director at CRRC, which conducted the survey, advised caution in assuming that small changes in the overall levels of support were statistically meaningful, though they were ‘slightly beyond the average margin of error’.

‘It is a positive sign clearly, but a 5% change between survey waves is relatively minimal’, Gilbreath told OC Media.

‘The results [between different years] appear to be generally comparable, although there should be some caution, as the survey designs had a number of different features, including sample design and questions asked prior to asking these questions’, he said.

The findings for young people represented a ten percentage point jump from a year earlier; NDI/CRRC’s June 2018 poll found that just 28% of 18–35-year-olds believed that protecting the rights of queer people was important. 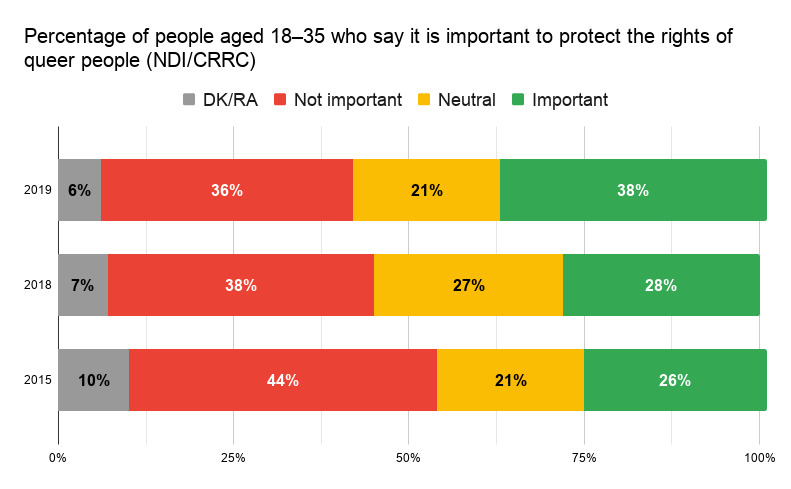 Gilbreath said that ‘this change appears to be reliable, and that young people are indeed becoming more supportive of protection of minority rights’.

People in settlements with majority ethnic minority populations were evenly split, with 29% saying that protecting queer people’s rights was important and 29% saying it was not.

Meanwhile, 32% of people in the capital said protecting the rights of queer people was important, with 40% saying it was not.

When discounting those who refused to answer or said they did not know, which at 35% was over three times higher in ethnic minority settlements than other areas, support was far higher than in other areas. 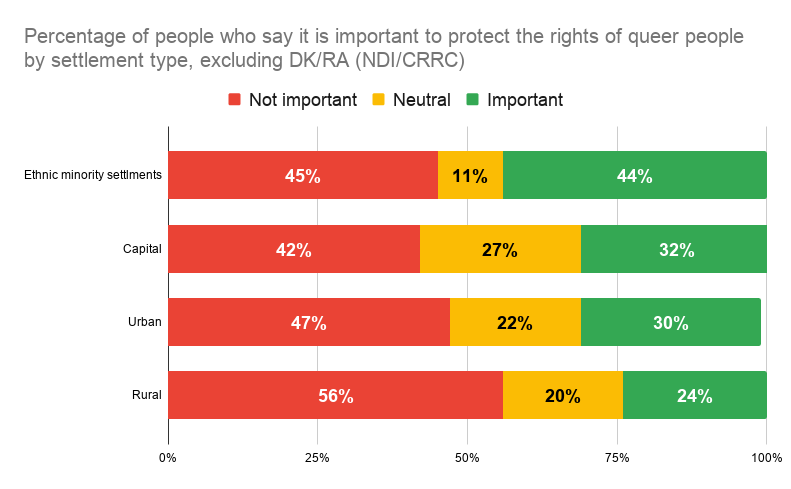 ‘On this, the overall positives are not different but the degree of positive is different. However, I do not have a clear explanation for why this might be the case’, Gilbreath said.

Kvaratskhelia said it was ‘difficult to say’ why ethnic minority groups were relatively more supportive but ‘probably the reason is that they understand well how it feels to be oppressed because you are “different”, to not be accepted because of your identity’.

Women were also more likely than men to report that protecting queer rights was important, with 31% doing so compared to 23%.

According to a press release from the National Democratic Institute (NDI), who commissioned the poll, the surveys were carried out from 13–29 July with over 2,100 face-to-face interviews completed. The average margin of error was +/-1.7%.

Queer rights in the headlines

Kvaratskhelia said she believed rising support for queer rights was due to several events that made headlines in recent years.

In February, activists announced that the country’s first queer pride march would take place in Tbilisi in June. However, following threats from several far-right and ultraconservative groups, the Interior Ministry announced they would not protect the march.

On 10 July, activists held a brief ‘guerilla pride’ outside the Interior Ministry as groups of conservative and far-right activists roamed the central streets of Tbilisi.

‘Media coverage and public debates around Tbilisi Pride, the government’s decision not to protect Tbilisi Pride, and the actions of far-right groups and Levan Vasadze helped to create the sympathy for queer rights’, Kvaratskhelia said.

After a small gathering in June in Tbilisi calling for police protection for pride was confronted by thousands of homophobic counter-protesters, Vasadze, a prominent local businessman, announced plans to set up a ‘people’s legion’ to detain pride marchers.

‘Vasadze’s actions and those of the far-right were totally unacceptable for the majority of Georgians’, Kvaratskhelia said, ‘It made many people angry and caused sympathy towards the LGBTQ community’.

The previous year Kashia wore a rainbow armband during a game for Dutch team SBV Vitesse, and despite facing heavy backlash in Georgia, made further statements in support of equality. Kashia received support from a number of high-profile public figures.

‘Events that took place around Guram Kashia and Tbilisi Pride triggered public debates that were massive, that represented a real breakthrough, unlike NGO activities and campaigns that usually reach only members of our bubble’, Kvaratskhelia concluded.

But, she said that the breakthrough is ‘hardly sustainable’.

‘It is important for the state to recognise LGBTQ-related problems and to do something about it. To find systematic solutions and lead the fight against homophobia and transphobia.’

‘Pride is one attempt at this’, she concluded. ‘It forces the government to understand that the only way to have peace, equality, and democracy in the state is to fight homophobia and take steps towards reaching equality.’

The government is ‘unable to respond’ to violence against queer people

According to the Public Defender’s 2018 report, violence against queer people, whether in the family or in public spaces, is a serious problem in Georgia, and that the government has been unable to respond to this challenge.

‘In some cases, complainants withdrew cases and refused to cooperate with the general inspection or the Prosecutor’s Office because they didn’t believe an investigation into their cases would be timely’, the report read.

The report said transgender women in particular often appeal to the Public Defender’s Office about the violence they face.

‘Unfortunately, law enforcement officials don’t have an efficient strategy against hate-motivated violence. They react to individual cases and don’t take action against the systematic problem’, the report read.

The police regularly issue statements prior to International Day Against Homophobia, Biphobia, and Transphobia on 17 May, pledging safety guarantees for protesters, and 2019 was no different — though it did not translate into a guarantee for police protection for the Tbilisi Pride march held one month later.

The previous year, queer rights activists decided against holding a protest in central Tbilisi after threats of violence from far-right groups. Instead, activists held a number of small ‘guerrilla demonstrations’ outside ministries and other government institutions.

On 17 May 2013, the authorities failed to protect several dozen queer rights activists when a homophobic mob led by priests attacked demonstrators. Despite numerous videos depicting the acts of violence, none of the attackers were held responsible.

Since 2014, the Church has celebrated ‘Family Purity Day’ on 17 May, with priests leading thousands through the streets.