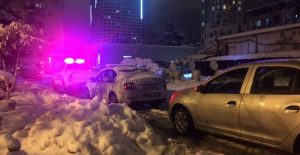 Police discovered the bodies of a 70-year-old woman and her son, around 50, on 31 January in Batumi, southwestern Georgia. The cause of death is not yet known, but some neighbours have claimed that they froze to death. The bodies showed no signs of violence.

Batumelebi, a local news outlet, writes that the family’s neighbours called the police to the flat on Inasaridze Street after noticing that the mother and son had been missing for several days.

When the police came the door was locked; the body of the woman was found near the front door, while the man was found in bed.

According to neighbours, the two had lived in the flat for several years. The woman was frequently ill and was often in bed, while the son took care of her.

Netgazeti quoted emergency doctors who arrived at the scene with police as saying that the two had been dead for several days.

One neighbour, Irina Chkheidze, told Channel 1 that the man used to bring food from the local free food kitchen, but that he hadn’t shown up for several days, which is why they became suspicious.

‘So the neighbors decided to check on them and they opened the door every time someone knocked. This last time no one responded, and they called the police’, she said.

Neighbours said that the family’s electricity had been cut off on 26 January as they couldn’t pay the bill. The flat did not have a natural gas supply, but they used to cook on a portable gas stove. The family was on the list of socially vulnerable families receiving a social allowance from the government, and both of them suffered from mental health issues.

The Ministry of Internal Affairs is investigating the possibility that the deaths were a result of suicide. The bodies have been sent to the morgue for autopsy to determine the cause of death.