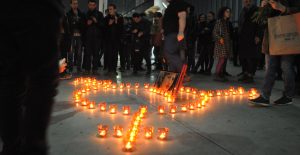 The man convicted of murdering transgender woman Zizi Shekiladze was sentenced on Friday to 13 years in jail by the Tbilisi City Court.

This includes a 10 year sentence for premeditated murder and three years for robbery.

The lawyer for the victim’s family protested that the trial did not examine transphobic hate as a possible motive and aggravating circumstance in the case.

Strangers attacked Zizi Shekiladze, 32, on 16 October, cutting her throat and leaving her to die. She was taken to hospital with multiple head injuries and remained in a coma for several weeks before passing away on 23 November.

Police arrested the suspect, a man born in 1985 who had previous convictions, on the day of the attack, before releasing him on bail.

The Women’s Initiatives’ Supporting Group (WISG) announced in October that in 2016 alone there were at least 20 attacks on transgender and gender nonconforming people in Georgia.

Two years ago, on 11 November, another transgender woman, Sabi Beriani, was murdered in her apartment. According to the official investigation, the murder was the result of an argument over money. However, human rights activists claim that she was murdered because of her gender identity.

Both the City Court and Appeal Court acquitted Levan Kochlashvili, the man accused of Beriani’s murder. The courts did however find him guilty of assaulting another transgender woman, Bianka Shigurova, and intentionally setting her house on fire. On 30 December 2016, the Supreme Court of Georgia, the highest court in the country, sentenced Kochlashvili to 10 years in jail, overturning the decisions of the city and appeals courts. The decision of the Supreme Court cannot be further appealed.

On 4 February 2016, Shigurova was also found dead in her apartment. The official version of events states that her death was the result of poisoning from a natural gas leak.