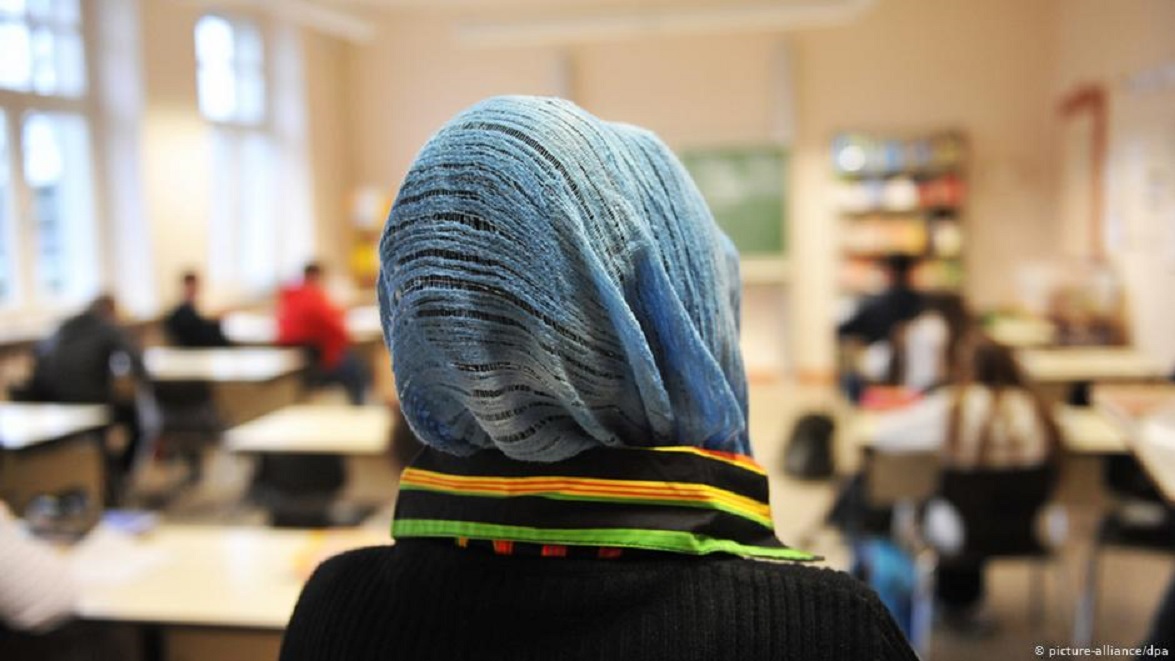 The student survey, which has teachers track the number of students that wear a hijab, has angered Daghestani residents and elicited vociferous denials from government officials.

A teacher’s unintended WhatsApp message has sparked widespread anger throughout the Russian Republic of Daghestan.

On Wednesday, a group of parents in a common WhatsApp group, whose children are students at gymnasium No 13 in Makhachkala, received a message from one of the school’s teachers — an image of that year’s student survey.

The survey, which is used to track students’ socio-economic conditions, had the usual categories such as ‘number of students with a disability’ and ‘number of children from low-income families’ but it also had a new category: ‘number of girls wearing a hijab.’

One of the parents of a student in gymnasium No 13 told OC Media that after this information became public, the teacher sent to the WhatsApp group a ‘corrected’ survey without the ‘number of girls wearing a hijab’ category.

Muminat Murtazayeva, the director of gymnasium No 13 in Makhachkala, told OC Media that a survey in this form no longer exists, and this was a sample of 2016.

A different survey, used at school No 15 in Makhachkala and obtained by OC Media, also includes a question pertaining to the clothing worn by a child’s parents and which only has two standard answers: ‘hijab’ and ‘regular’.

School teacher Patimat Abakarova told OC Media that such surveys have been filled in regularly since 2016, and the category about students wearing a hijab was introduced at the request of the police.

This information, she said, is most likely collected for the Centre for Combatting Extremism of the Ministry of Internal Affairs of Daghestan.

Maryam Islamova, the mother of a student at a school in Makhachkala, told OC Media that she believes that the hijab is so closely watched because it is religious attire, and that, according to law enforcement agencies, those who wear religious attire and live according to Islamic law are ‘potentially dangerous people’.

‘A few years ago, teachers were not allowed to wear the hijab, neither were doctors in hospitals. Now it seems that this wave [of suppressing the hijab] has subsided, but, as it turns out, an accounting is now underway’, she said.

In an Instagram post published on 10 October, the head of the education department of Makhachkala, Vadim Debyayev, denied that there was an accounting of the number of students wearing hijabs.

He wrote that he considers it ‘unacceptable, both in terms of student rights and moral ethics’ and that  ‘neither the Department of Education, nor the educational organisations of the city of Makhachkala keep records of students wearing a hijab’.

The sole purpose of yearly student surveys, he wrote, was ‘to prevent neglect, homelessness, and juvenile delinquency’.

Shamil Musayev, the parent of a pupil at school No 15, told OC Media that collecting data on students in hijabs and their parents is similar to the ‘preventive supervision list’ of ‘extremists’, on which one may find themselves simply ‘if they possess a beard’.

‘We all know what then happens to those who get into such lists. To confirm their extremism, arms can be planted at them any time, or they may be accused of calling for extremism on the Internet or, as is now fashionable, accused of financing a terrorist organisation’, Musayev said.

Ibragim Malachilov, a student at the Daghestani Road and Transport College, told OC Media that the college’s guards do not let students enter the campus if they have two days of stubble on their faces — they are sent back home to shave.

OC Media has obtained a copy of a letter, dated 13 September 2019, from the head of the Center for Combatting Extremism of the Ministry of Internal Affairs of Daghestan, Magomed Saypulayev, in which Saypulayev calls on the rector of the Daghestani Pedagogical University to tighten control over student attendance and to ‘pay attention’ to students who ask for permission to leave on Friday.

The apparent monitoring of students wish to go to the mosque for Friday prayers is justified by Saipulayev as an action done ‘in order to prevent their involvement in extremist and other illegal activities’.

The letter stated that ‘skipping classes’ — i.e. going to Friday prayers —  for students is undesirable, and subsequently students can be expelled from the university due to ‘systematic disruption of the educational process’.

In 2016 Russia adopted a law allowing those who are ‘prone to crime’, or whose behaviour is ‘antisocial’ or ‘violates generally accepted standards of behaviour and moral, rights, and legitimate interests of others’ to be added to the list, which imposes restrictions on freedom. Opaque procedures for adding people to the list allow law enforcement officers to include practically any Russian citizen. As a rule, people, who find themselves on the list must report their movements and actions to their local police precinct. Yet, since the law doesn’t specify how to handle people who are included in the list, in practice, each police station sets their own rules.

According to Memorial, a human rights group, since 2013, thousands of people in Daghestan have been put on a ‘preventive supervision list’ as ‘extremists’, ‘religious extremists’, or ‘followers of Wahhabism’.

On 23 March 2017, the Minister of Internal Affairs of Daghestan, Abdurashid Magomedov sent a letter to the Supreme Court of the republic, in which he said that there is no longer a ‘preventive supervision list’ of ‘extremists’, and that the data collected for the list has been destroyed.

Memorial states that no one has seen the regulations on the basis of which people are registered for a ‘preventive supervision list’, and the procedure for registration and deregistration has not been made public.

‘Misha must survive!’ — Saakashvili supporters rally for his release