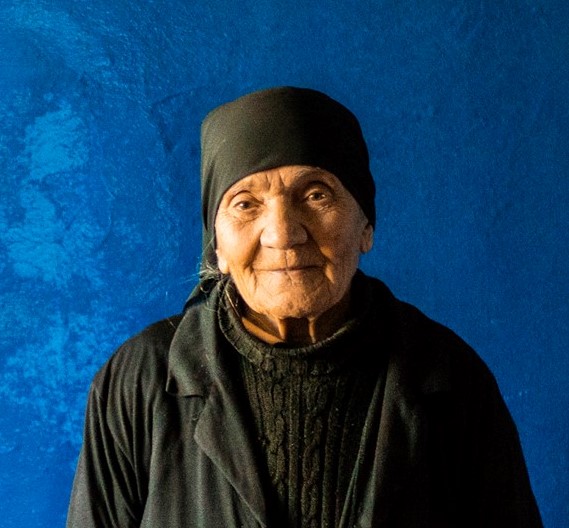 Women in Georgia very often lack a voice of their own. Their opinions, feelings, dreams, aspirations, and achievements can be conveyed by others, often the men around them. The Women in Georgia project gives a voice to these women, allowing them to tell their own stories — in their own words. The project collected 150 distinct stories from women throughout the country. OC Media brings you a selection of these stories, translated into English and Russian. Below, in her own words, Natela Soselia.

‘Our village was half empty that night. We were about to go to bed, Datiko and I, when someone banged on our door telling us to run and hide somewhere, as the Abkhazians were coming and killing everyone who remained. We ran for our lives, in the clothes that we were wearing. I was barefoot, in a nightgown and a bathrobe. All I managed to do was to put out a candle to avoid burning the house down. I thought we would be back in no time. Why would I even bother to put out the candle if we were not going back? And we never did.’

‘My husband, together with other men, ran along the road. I shouted to him not to go in that direction, to hide in the woods. He did not obey me. I ran into the forest, found a ditch, and lay down in it. When my eyes adjusted to the darkness, I started to watch the road and listen to the voices, hoping to learn of Datiko’s fate or see where he was going. In a few hours, our neighbour’s — Igor Alania’s — house started to burn, flames rising high above it. I said they must have burned Datiko. Other women, my neighbours, scolded me for having such thoughts. They said Datiko must have left and he was safe.’

‘At dawn, I went into the Alanias burnt kitchen with my neighbour. Three male bodies were still burning. I identified Datiko. He was a tall, well-built man, easily recognisable even from afar. I realised I was all alone. I did not know how to survive, where to go from there.’

‘I could not survive alone. My cousin suggested that I hide in Anaklia, at my relatives’ place. I went along the seashore. I walked at night on stones so that no-one could see me. Anaklia was empty except for a handful of families here and there. One woman brought me some water and I caught my breath. She told me there was no use staying there; I would not survive. She advised me to reach Zugdidi and possibly a commandant would get me to a safe place.’

‘In Anaklia, there was a man who had a tractor. He placed us, five women, on his tractor and we set out for Zugdidi. On our way we were accosted by that imp Jaba Ioseliani’s [leader of the Mkhedrioni — a nationalist Georgian paramilitary group] men. The rascals demanded all the money and gold we had. I had not been able to re-enter my house, all I could do was blow out the candle, how could I have any money or gold? They threatened to kill us. I was the oldest of the women and I shouted: “We survived Abkhazians and are we going to be killed by you, Megrelians?!” They told us to get off the tractor. They took the tractor away and told us to run on foot. We ran. We were running and they were firing their guns to scare us away. They were shooting in the air, but we couldn’t be sure, could we? We were yelling and running along the forest. The bullets were following us, flying behind us, zooming. If one of us fainted, the others, not-so-faint-hearted returned, got her on her feet, let her lean on our shoulder and kept running. We had to slow down in the end. I don’t remember where we were heading. I was running and feeling bitter for not being able to bury Datiko. That was all I could think about under the whizzing of flying bullets.’

‘We ran until Khide cemetery. We found shelter in a tomb, and spent the whole night there. The tombs are safe places in Samegrelo. The night passed peacefully.’

‘We traveled to Zugdidi in horse-drawn carts and finally joined the procession of people who had escaped from death. We arrived peacefully. The commandant demanded a photo for documentation, and refused to let me pass if I didn’t give him one. I did not have a photograph; all I had was my night-gown and my bathrobe. I begged him not to leave me in the warzone. He let me pass.’

‘Since then I’ve lived in Zugdidi, in the settlement for internally displaced persons. My room is large, but I have only a bed, a dresser and a table. The good thing is that my neighbours are nice. We have meals together and entertain one another with stories of our past.’

(Author’s note: In Zugdidi, near the president’s former residence, a grey four-story building has stood for decades,it is officially referred to as a ‘a settlement of IDPs’. The corridors of the building have no windows, and there is no sewage system. The furniture in the rooms is scarce, some parts of the building lack electrical wiring. The president’s former palace has now been transformed into a technopark.)