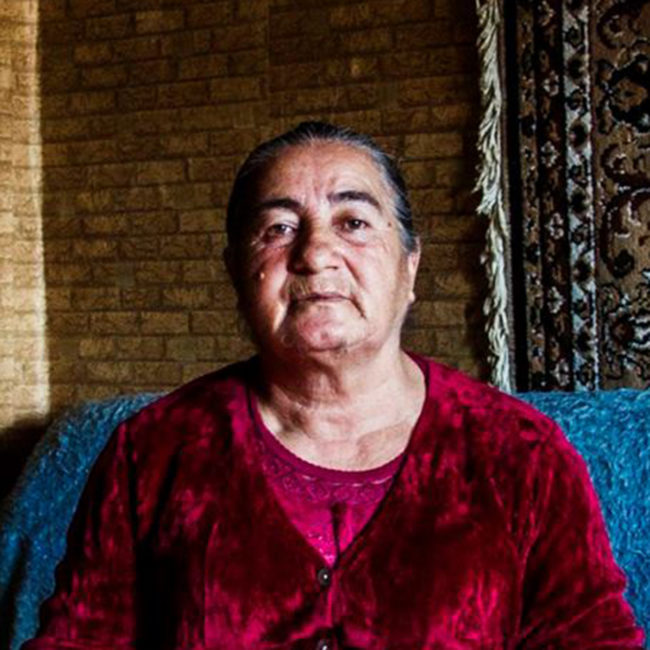 ‘Women in Georgia very often lack a voice of their own. Their opinions, feelings, dreams, aspirations, and achievements can be conveyed by others, often the men around them. The Women in Georgia project gives a voice to these women, allowing them to tell their own stories — in their own words. The project collected 150 distinct stories from women throughout the country. OC Media brings you a selection of these stories, translated into English and Russian. Below, in her own words, Venera Martkoplishvili.

‘I got married when I was 14; this was a marriage of love, as they call it. I’m not sure I was sane, I didn’t even finish the 8th grade… I am from Dedoplistskaro; he was a Romani boy from Gurjaani. We met in Dedoplistskaro, where he worked, so I followed him to Gurjaani. My parents soon took me back. I was reluctant to go back, but they told me I could marry him when I finished school and allowed my husband to visit me from time to time. But as soon as I finished the 8th grade I went back to my husband again.’

‘Then I studied accounting for four years at a vocational school in Lagodekhi. We rented an apartment there but I hardly managed to finish it because we often travelled between home and Lagodekhi. Then I was enrolled in a distance learning programme from the Polytechnic Institute, and studied economics. I went through some rough times, but I still managed to finish my studies. Since all of my siblings (we were seven siblings) in my family got a higher education, I also wanted to get one, and I fought for that. My husband was not against my studying. At the same time, I was selling things; I needed some money to cover my travel and living expenses, did I not? So, I went through tough times but still graduated from the institute. I did not work after that because I could not cope with my husband’s family, who did not allow me to work. A woman should beg, fortune-tell, or sell things to earn some money. Although they let me study, it was shameful in the Roma community to work anywhere.’

Three days after buying the house, my husband left me for his fourth wife.

‘I lived with my first husband for 13 years. I had 4 children with him. Through those 13 years he married other women about four times. Meanwhile, I lived with his parents and suffered. He used to come back home when he abandoned one of those women. It is an accepted practice in the Roma community to have two or three wives. But I am Georgian and I could not deal with living with my husband when he had a second and third wife.’

‘In 1991–1992, during Gamsakhurdia’s presidency, while we were living in Gurjaani, the Romani were expelled from Georgia. They told me that I could stay because I was Georgian but my husband was leaving so I had to go with him. We took everything I had received from my parents — whether it was a bedroom set or blankets or mattresses — in a big trailer, and left for Russia. We stayed there for several months, renting an apartment. Then we went to Chechnya, as we could no longer pay the rent or buy a house. We suffered a lot and had to leave things in different places because we could not afford to rent a truck and take everything with us. From Chechnya we moved to Baku, from Baku to Kirovabad, and then to Tsnori [in Georgia]. My sisters lives in this municipality. When I got to Tsnori, I had only a car and one tent, we did not have anything else. We sold the car and bought a house in Tsnori. Three days after buying the house, my husband left me for his fourth wife. Later he had a child with her.’

‘Three years passed after he left. He had never visited me during that time. People saw that I was a single woman and both Romani and Georgian men bothered me so much that I had to marry again. My second husband had two children. We brought them up and had one girl together. I have five children in all.’

‘I had a terrible nomadic life. No Georgian women would have been able to withstand all the suffering I went through. My family used to tell me all the time to come back, until I had a child, to leave the family and go back to normal life. But I loved my husband, and at the same time, I wondered what people would say about me. In short, even though I suffered a lot, I did not have enough courage or did not want to leave my family... I was even abused physically — by my husband, father-in-law and sister-in-law, all of them used to beat me if I dared to speak out.’

‘A woman is responsible for doing everything in the Roma community. She is supposed to be out from morning till evening earning money. When she comes home, she has to cook, split firewood, and bring water. Neither my first nor my second husband ever brought water to the house. I have no idea how I survived. When I married for the second time, believe me, sometimes I even got to the point where I would beat the men when a fight broke out among them after they had been drinking with my husband. My mother-in-law and sisters-in-law just drove me crazy, I do not know what kind of people they were to mistreat me like that. But I was so fed up I did not meet them half-way. Yes, I had to become stronger and stand up for myself.’

All of them contact me because they trust me

‘In 2009, people from some organisation visited our village. They took the Romani children to a Georgian school in Dedoplistskaro. I helped them because I knew Georgian. After that, George Sordia offered me some training course in Tbilisi. After attending the training course, I founded an organisation with their support, the Kakheti Roma Alliance — Roma.’

‘I could do hardly anything from Dedoplistskaro, so I decided to move to Tbilisi and rent an apartment to work on this and get in touch with organisations and people who would assist me. I am currently also a member of the Council of Minorities at the Public Defender’s Office, and work on Roma rights through implementing projects with my organisation.’

‘The community has a great deal of confidence in me. I have gained their trust since I founded the organisation and started implementing projects for the Roma community. I work in Gachiani, in Telavi, west Georgia, and I help them get passports, education for their children, writing applications to state agencies, preparing official documents, and in court. So I accompany them everywhere. All of them contact me because they trust me. For example, when some television station or organisation would visit them before, they did not allow them to come close, because they were afraid all the time. But if I called them or accompanied the visitors, they accept us. Moreover, they call me and ask me whether they should meet people who are interested in meeting them. When I agree, they allow them to make video recordings and talk to them.’

‘Roma women live in much worse conditions than Georgian women. I am rather sorry for them because I went through that nightmare myself. Therefore I also work on violence against women, discrimination, and gender in the Roma community. I have called the patrol police many times to prevent family violence and accompanied women in court.’

‘Romani girls are given away to be married at the age of 13–14. They are not even asked what they want; they are forced into marriage. Can you imagine what kind of life they might have?! They are victims of violence from the very first day of their marriages. Sometimes they are married to an older man, whom they do not love, so their whole life is suffering. It is also a violation of children’s rights when they force minors to marry, is not it?!’

‘Likewise, sometimes a boy is 13 years old and the girl is older, 15 years old. Often this 13-year child is not able to have sexual intercourse with the girl... So, if no sexual intercourse takes place during the first night of marriage, they take the girl to a specially selected woman to undergo defloration. Can you imagine the extent of violence they are subject to?! What is their life supposed to be like after that?!’

‘Everyone should know about this because this is a crime which is still practiced to date in the Roma community! My girls were subjected to the same violence and I could not stand up for them because I lived in the community and my husband would probably have killed me if I had. I have campaigned against this practice in the community since the foundation of my organisation. I could not protect my children, I was absolutely powerless when they were given away in marriage at the age of 13, but maybe I will be able to protect my grandchildren and eventually put an end to such cruelty!’

‘I am happy that people have become cautious since the law on child marriage changed, and they learned that transgressors must pay penalties. For example, one boy kidnapped a girl two months ago, but returned her to her family without touching after becoming afraid of the police. One 14-year-old girl has become engaged in Gachiani, but they are not planning to have a wedding until she turns 18. I am glad they have introduced this practice! At least girls will come of age before the wedding takes place, and they will decide either to marry or not to marry. The law has been enforced and I am rather happy to already see positive consequences.’