If fighting breaks out again in the disputed territory of Nagorno-Karabakh, Armenia will try to advance deeper into Azerbaijani-controlled territory, according to the International Crisis Group.

The new report from the International Crisis Group — an independent peacebuilding group active in Nagorno-Karabakh — was based on interviews with residents and observers on the ground. It analysed the military, political, social, and diplomatic developments in the conflict, including changes in public opinion since the April 2016 Four Day War. It concluded that Armenia and Azerbaijan are closer to full scale war than at any point since the two countries signed a ceasefire in 1994.

Armenia and Azerbaijan have been holding peace talks since the 1988–1994 Nagorno-Karabakh War, but have failed to agree on a settlement to the conflict. Regular ceasefire violations are reported by both sides, which briefly erupted to open hostilities in early April 2016.

The Four Day War resulted in some territorial changes, as Azerbaijan broke through Armenian frontlines in multiple locations, retaking several strategic heights, including the strategically important Lalatapa Hill, which remains under Azerbaijan’s control. 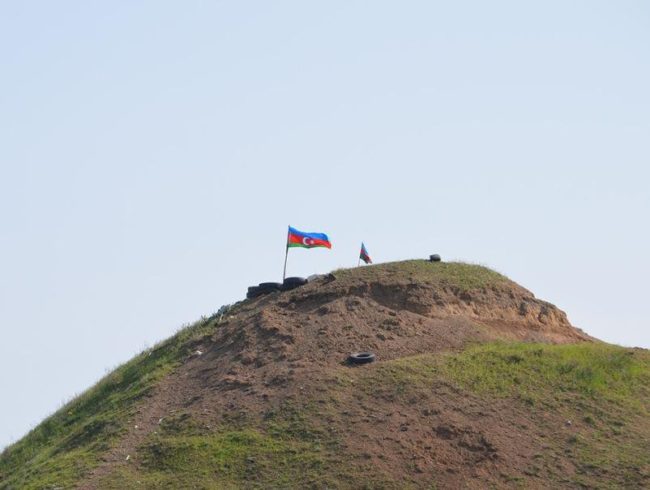 The report, Nagorno-Karabakh’s Gathering War Clouds, states that whilst mediators in the conflict reiterate that there is no military solution to the conflict, both countries have been ‘seized with a renewed appetite for conflict’ in the wake of the April 2016 escalation.

Since January 2017, a number of deadly incidents have occurred, with self-guided rockets and missiles used near densely populated areas along the Line of Contact between the two sides.

‘De facto Nagorno-Karabakh has even declared its readiness, if attacked, to advance deeper into Azerbaijan’s densely populated territory along the Line of Contact to gain a new security belt and strengthen its hand in future negotiations’, the International Crisis Group claims.

Concerns about Russia and the role of international community

The Crisis Group also emphasises that Russia remains the ‘most influential’ foreign player, as both a member of the OSCE’s Minsk group, who are trying to negotiate a solution to the conflict, and as the primary supplier of arms to both countries, leading Armenia and Azerbaijan to suspect that Russia is ‘more interested in expanding its influence in the region than in resolving the conflict’.

Given this, the Crisis Group claims that mediators’ primary task should be to resume regular communication between Armenian and Azerbaijani leaders, urge them to ‘tone down martial rhetoric’, and to soften their positions. This will presumably require Russia, the US, and France to put aside differences and to work in unison to overcome Baku’s and Yerevan’s distrust, which might be complicated due to recent leadership changes in the US and France, in order to avoid a risky and costly diplomatic paralysis, the report claims.

An expected increase in military activity would unavoidably result in serious civilian casualties and displacement, according to the report. It quotes Armenian sources calculating some 600,000 ethnic Azerbaijani inhabitants who would be forced to leave their homes in the event of war, while Azerbaijani sources estimate about 300,000.

Public opinion on both sides has also been changing, according to the review. The Four Day War triggered an immense rise in patriotic feeling on all sides, the Crisis Group claims, solidifying demands for a final solution to the conflict.

Escalation in 2016 prompted a wave of patriotism throughout Azerbaijani society unseen since the early 1990s struggle for independence from the Soviet Union, the report said, claiming that Armenian society sank into despondency after the April escalation, losing trust in their leadership’s ability to protect Nagorno-Karabakh’s territory and population.

[Read on OC Media: No political will in Armenia to find the missing persons of the Karabakh conflict;

Exploding mines, Jonik’s fate, and a dream of a home]