Opposition protesters clashed with police on Sunday after they were prevented from entering the east Georgian city of Telavi, where Salome Zurabishvili was being sworn in as president. In her inauguration speech, Georgia’s fifth president called for national unity and an end to ‘political confrontations’.

On Sunday morning, the Interior Ministry announced they would limit traffic movement in Telavi and to Kakheti Region due to security concerns.

An opposition convoy with signs reading ‘No to Salome!’ took off from Tbilisi heading to Telavi in the morning, but were blocked by police as the road turns North to Telavi just east of Tbilisi, with only invited guests allowed through.

The convoy was organised by the Strength in Unity coalition of presidential runner-up Grigol Vashadze, which is dominated by the United National Movement Party (UNM).

Vashadze was narrowly defeated by Zurabisvhili in the first round, winning 38% to 39%, but lost in the second round run-off on 28 November 40% to 60%.

Despite losing by 370,000 of votes, Vashadze had refused the concede calling the elections a ‘criminal farse’ and demanding snap parliamentary elections.

Vashadze and others argued that a promise by the government immediately before the election to pay off the debts of 600,000 people amounted to vote buying, and also pointed to violations during the election.

The main international observer missions — from the OSCE/ODIHR Election Observation Mission, NDI, IRI, as well as local watchdogs — did not question the legitimacy of the final outcome.

The OSCE/ODIHR mission called the elections competitive, where candidates were able to campaign freely and the voters had a chance to make their choice.

The opposition convoy then took the longer southern route proceeding through Gurjaani but were again blocked by police near the village Velistsikhei, 30 kilometres south-east of Telavi. 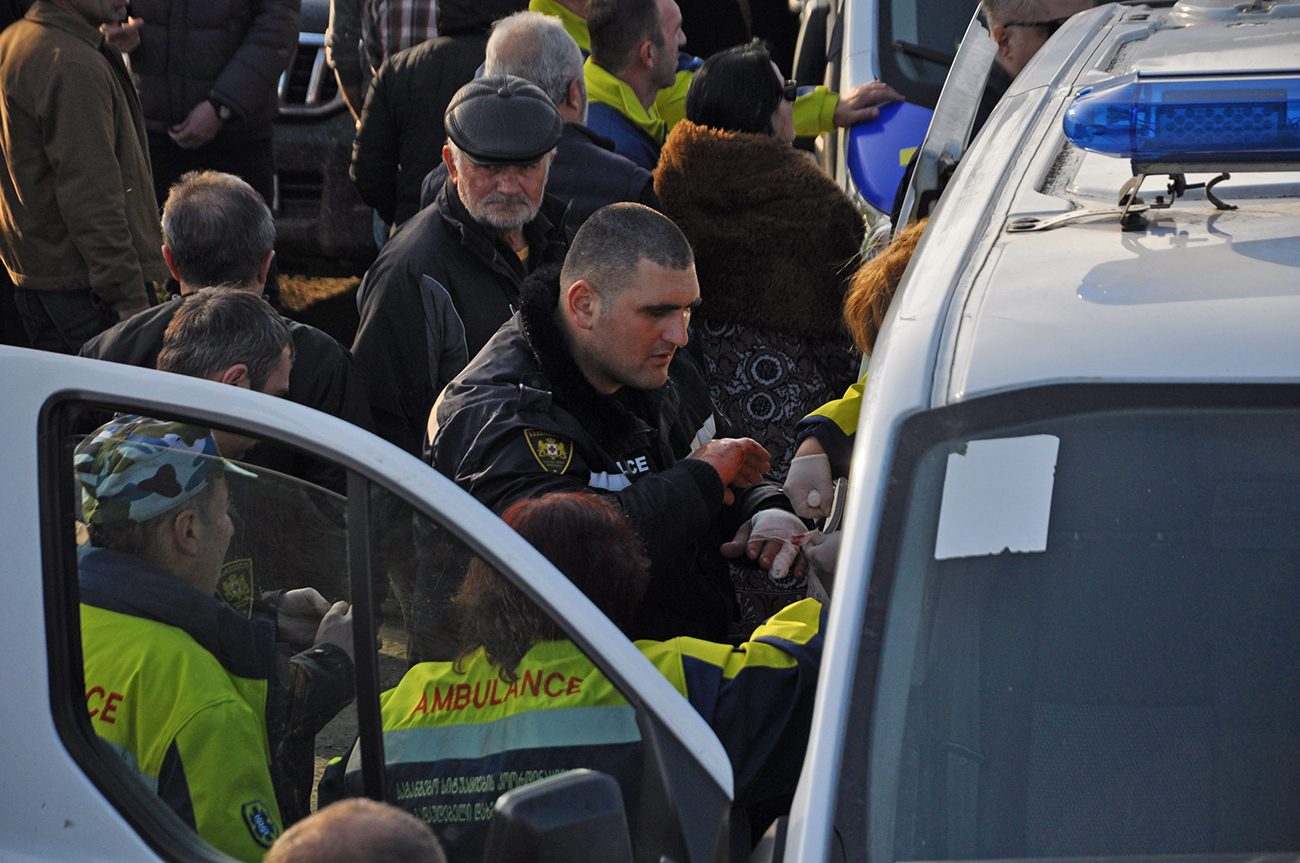 As Zurabishvili was sworn in, protesters scuffled with police near Velistsikhe in an attempt to break through but ultimately failed to reach the town.

According to the Interior Ministry, more than 10 police officers were injured during the altercation, and several opposition supporters were also hurt.

The ministry claimed they had offered an even longer route to protesters ‘through Kvareli’, as well as shuttles. They also said protesters could have walked to Telavi.

The leaders of the protest convoy, including the UNM’s Nika Melia and former presidential candidate Grigol Vashadze, insisted the Kvareli route was blocked just like the others and accused the government of curbing their constitutional right to freedom of movement.

The opposition also claimed the authorities did not inform them of the alternative routes beforehand.

Protesters attack a police pick-up truck as police continue to block the road to #Telavi, and to Salome #Zurabishvili's inauguration. #Georgia pic.twitter.com/wlPXl4CKYs

Clashes between police and opposition supporters grow stronger at the corner of highway leading to #telavi where #zurabishvili is to be sworn in #georgia pic.twitter.com/tFpbRP0Afn

Several cars of protesters have broken through police lines and are now moving slowly towards #Telavi and #Zurabishvili's inauguration. Several people were lightly injured. #Georgia pic.twitter.com/lhZ7vwGR75

Opposition protests were also held in several locations throughout the country including in Batumi and Zugdidi.

After the inauguration, Interior Minister Giorgi Gakharia thanked and apologised to police officers controlling the crowds, adding that they had been more tolerant than they had to.

He vowed to prosecute anyone, ‘regardless of their status’, if footage revealed they had committed offences against police officers.

Gakharia also criticised a statement from Georgian Public Defender Nino Lomjaria, who earlier called on the authorities to respect the opposition’s constitutional right to travel freely to Telavi.

She also urged protest organisers to ‘avoid violating the law, so that the assembly and manifestation sits within the constitutionally guaranteed limits’.

After the swear-in ceremony, former Georgian President and UNM party chair Mikheil Saakashvili called for a protest rally in Tbilisi in front of the Parliament building on Rustaveli avenue.

That evening several dozen opposition supporters gathered in front of parliament and set up several tents.

Opposition leaders told journalists they will now plan their next move.

‘I respect those who did not vote for me. I also know that several [political] parties have different positions, among others, about recognising me as president. However, from today, by the rights bestowed upon me by the constitution, I take responsibility to be everyone’s president’.

Zurabishvili several times evoked the legacy of the first Georgian Republic of the early 20th century.

‘A century ago, the head of the the First Republic adopted the most progressive constitution of their times.’

She later said her presidency was a ‘continuation of the tradition’ of those times, arguing that ‘five women in parliament’ was still rare in Europe at that time.

The 1918 Act of Georgian Independence included signatures of five women, all from the Social-Democratic (Menshevik) party.

She praised Georgia’s previous post-independence presidents, saying first Georgian President Zviad Gamsakhurdia ‘played a crucial role when he called a referendum and adopted the Act of Restoration of Independence of Georgia’ on 9 April, 1991.

‘Eduard Shevardnadze was the first to pave way to European and the Euro-Atlantic space. In the initial years of his presidency, Mikheil Saakashvili laid the ground for a number of important reforms. During Giorgi Margvelashvili’s presidency, a number of steps were taken towards strengthening democratic presidency, solidifying stability.’

‘My mission is to do everything to make the development of our state, of its European future, irreversible’, she said.

In her speech, Zurabishvili also condemned ‘attempts’ to politicise the army, confirmed her support for Georgia’s pro-western foreign policy, and said that Georgia should become a ‘bedrock of economic stability and security in the Caucasus’.

Zurabishvili vowed to ‘stand by’ internally displaced persons in Georgia and also urged the public to consider those ‘living in the occupied territories’ as fellow citizens that they must reconcile with.

‘We, with Abkhazians and Ossetians, have come a long way together. We are each others’ relatives, we have mixed families. We have to find ways to reach out to the new generation and lead them to Europe. Now, as never before, the Abkhaz language and identity needs protection’, stated Zurabishvili in her inaugural speech.

The new president said that Abkhazia and South Ossetia were occupied by Russia, something that Georgia, as a sovereign country, would not tolerate.

Zurabishvili praised the principle of ‘social solidarity’ — between generations, towards socially vulnerable people, single mothers, and people with disabilities — something which she called the ‘basis of a strong state’,

Opposition parties had previously pointed to what they deemed a lack of high profile people on the guestlist.

Bidzina Ivanishvili, the chair of the Georgian Dream party, who urged his party to endorse Zurabishvili’s candidacy and supported her throughout the campaign, was not present at the inauguration ceremony.

Journalists were not allowed into the inauguration ceremony and were instead allocated a space in the castle’s courtyard, where the authorities had set up a monitor.

With Zurabishvili sworn in as president, a new version of the Georgian constitution also came into force, reducing further the president’s powers and making her the last president to be elected by popular vote. The next Georgian president will be selected in six years time by a 300-member election board.

5. After one year of inaction, alleged rapist of young Azerbaijani activist arrested

Demand for free meals at schools causes stir in Georgia