We want to hear from you! You can send us your stories, photos, and videos about the coronavirus via Facebook, Twitter, or email at [email protected].

Clothing shops in Georgia to reopen without changing rooms

Several clothing chains have said they will temporarily close changing rooms in stores when they reopen due to them being ‘high-risk zones’ for the spread of coronavirus.

Retail Group Georgia, which operates 60 shops in Georgia, such as Zara, Bershka, and Massimo Dutti, announced they would extend their return period for unwanted items from 3 days to a week as a result.

Rezo Magharashvili, the director of Retail Group Georgia, told On.ge that returned items would be placed separately and disinfected.

The government has not indicated exactly when clothing shops will be allowed to reopen. 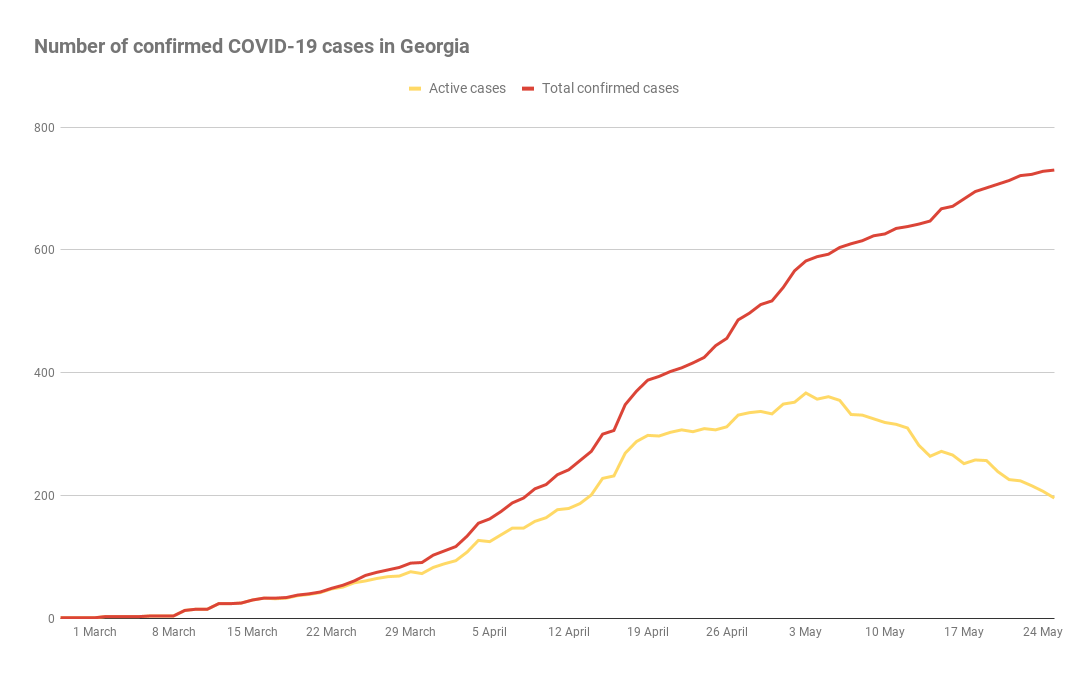 The number of active COVID-19 cases in Georgia has continued to fall since peaking at 374 on 3 May.

The number now stands at 183 active cases out of a total of 732 confirmed, with 537 having recovered and 12 dying.

According to Gagloyeva, 15 of the  22 people that have recovered were discharged in the last few days, and 14 remain in treatment.

South Ossetian medical authorities also reported that they had changed the diagnosis of one patient previously confirmed as having COVID-19, taking the total number of coronavirus cases down to 36.

Over the weekend, the Russian armed forces set up two mobile hospitals in central Daghestan’s Buynaksk and Botlikh districts to ease the burden on healthcare capabilities of the North Caucasus republic.

Logistics and medical units of the army were dispatched from other regions of Russia last week by Russian Defence Minister Sergey Shoygu, on behalf of President Vladimir Putin.

Additionally, new infectious hospitals for COVID-19 patients are being built by the Ministry of Defence in the Daghestani cities of Derbent, Khasavyurt, and Kaspiysk.

Daghestan has the fifth-highest number of cases among Russia’s regions, with nearly 4,300 confirmed cases and 118 fatalities as of today.

Doctor’s from the region have warned that the real numbers could be far higher. Irina Tragira, a senior doctor at Daghestan’s Research Centre for Physiology and Infectious Diseases warned on 22 May, that many people with symptoms of COVID-19 were being misdiagnosed with community-acquired pneumonia.

Chief Medical Officer of Abkhazia Lyudmila Skorik has said that starting today, the authorities are allowing ‘citizens of the Republic of Abkhazia who were treated in neighbouring Georgia’ to return home, according to regional TV channel Gal.

It is unclear if the measure will extend to residents of Abkhazia who the government does not acknowledge as citizens.

According to Skorik, those returning will have to self-isolate for two weeks. She said that unless they have documentation confirming they have already been tested for COVID-19 the authorities would test them.

The Georgian government claimed earlier this month that they had received 188 people seeking medical treatment ‘from the occupied territories’, referring to both Abkhazia and South Ossetia.

Welcome to OC Media’s coronavirus live updates for Tuesday, 26 May. We will be bringing you the latest news on the COVID-19 pandemic from around the Caucasus.

Armenia’s health authorities announced that of the 186 ICU beds available for COVID-19 patients, 154 are currently in use and only 32 are available. They said there are 230 patients who are in serious condition and 52 in extremely critical condition.

The country implemented stricter measures on Sunday including shutting down businesses, restaurants, companies, banks and beauty salons that do not follow government-mandated safety measures.

Muslim communities in Georgia’s Autonomous Republic of Adjara and Samtskhe-Javakheti region celebrated Eid al-Fitr with collective prayers in reopened mosques on Sunday. Community leaders insisted they stuck to anti-coronavirus measures, including keeping a safe distance from each other and wearing face masks.

The Georgian government extended a ban on public transport until 15 July, although officials later clarified that 15 July was the latest date and that they hoped to rescind the ban earlier.

As cafes and restaurants reopened yesterday, the authorities in South Ossetia have said they plan to warn establishments against holding ‘mass events’.

The authorities also said they would step up security at hospitals where COVID-19 patients and those under 14-day mandatory quarantine are placed. The announcement came after reports of 25 students who returned from Russian military schools fleeing quarantine.