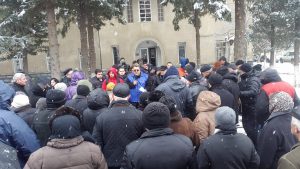 Workers dismissed on mass from a Rustavi nitrogen plant on 26 January have continued to protest the decision. The workers were joined by the Georgian Trade Union, students, NGOs and opposition activists, all demanding that the 350 employees, who were fired without warning, be reinstated to their previous positions.

The former employees claim that they only learned that they had been fired when they came to work in the morning as usual and the guard didn’t let them inside the plant.

When OC Media arrived to Rustavi on Wednesday, the protesters had blocked the entrance of the plant stopping vehicles from coming in or out. They then moved to the company’s offices and handed their written demands to company representatives.

‘I came to work and they didn’t let me in. It was the same with the others. Then the manager came and told us that we were fired. There was no warning or explanation. We want justice’, former employee Vakhtang Tskhovrebadze told us.

Among the fired workers there were employees who had worked in the plant for many years, but they have not been offered any compensation.

‘I was coming back from my job and before I left they told me that my pass was blocked and I couldn’t come back the next day. It’s been 36 years I have worked here. Couldn’t there be a little bit of respect? Do I not have at least a bit of value to this company, why would they act like this?’ Tamar Kapanadze, another fired employee told OC Media.

Students who came to support them said that if the peaceful rallies don’t bring any results they will take ‘radical measures’.

Saba Gamkrelidze, who represents the Young Greens organisation, told us that the Labour Code is almost inactive in Georgia, and that companies violate the rights of employees.

‘Employees are always oppressed and companies do their best to get more profit. Three-hundred-and-fifty employees were fired, but even the others got fresh contracts with unacceptable conditions in them’, he said.

Tamaz Dolaberidze, head of the metallurgical, mining, and chemical industry workers trade union, who had worked in the nitrogen plant in the past, says that the new contracts contradict the Labour Code.

Davit Galashvili, from the Auditorium 115 student movement, who came to the rally told OC Media that the rallies will continue until the company signs a collective contract with the employees.

‘Our movement always supports oppressed people. We know they treated these people unfairly. Thursday there will be a strike and on Friday we plan a huge demonstration in Rustavi’, he said.

When the workers started to protest, the director of EU Investments, which owns the nitrogen plant in Rustavi, issued a statement explaining the reason the workers were fired.

He wrote that it was because the plant had halted work. As soon as the plant resumes work, the company will rehire them he claims, but without specifying any dates or terms.

The nitrogen plant in Rustavi is the only place producing mineral fertilisers in Caucasus. It also produces ammonia, sodium cyanide, nitric acid, ammonia water, and other products.

The products are sold locally and exported to Mediterranean and Black Sea countries. 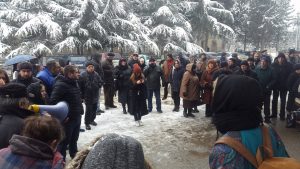 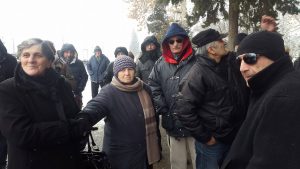 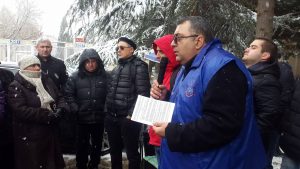 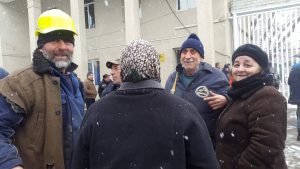