The COVID-19 outbreak generated discussion about whether support for democracy would decline during and after the crisis. While reported support increased, this did not necessarily match support for democratic means of governance.

Compared to a study with the same question conducted before the virus outbreak, support for democracy increased.

The Caucasus Barometer 2019, conducted before the pandemic, shows that nearly half of Georgians (49%) thought that democracy was preferable to any other kind of government. The rest did not report explicit support for democracy. The share of people explicitly supporting democracy rose to 60% during the COVID-19 outbreak. 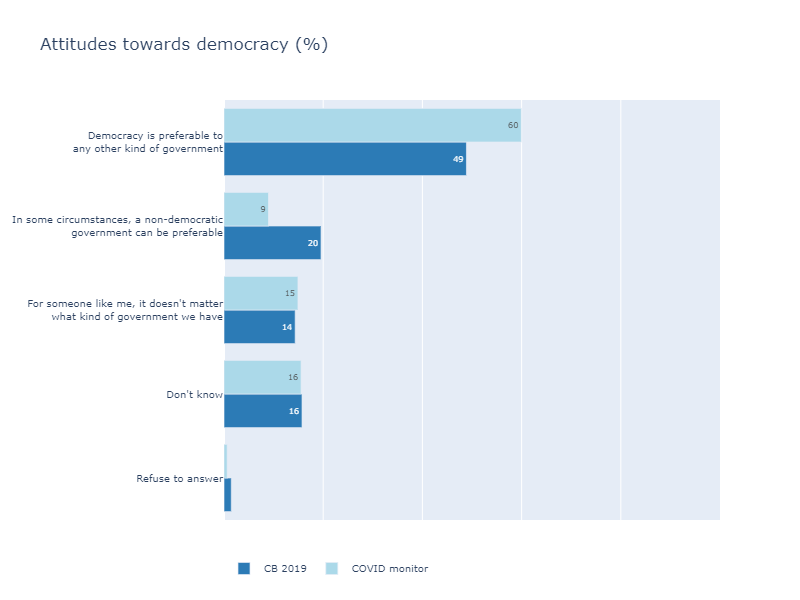 A previous article looked at how support for democracy was not associated with liberal values, such as support for gender equality and acceptance of different ethnic or religious groups.

[Read more: Analysis | There is a gap between support for democracy and liberal values in Georgia]

Data collected during the COVID-19 Monitor suggests that support for democracy is also not associated with preferences for democratic rules of governance.

The COVID-19 survey asked Georgians for their opinions regarding different approaches to governance, citizen’s attitudes toward the government, and restrictions to overcome the crisis. The data shows ambiguous results.

The majority (59%) said it was acceptable for the public to critique the government, and nearly two-thirds said it was unacceptable to restrict citizens’ rights without going through institutional checks and balances.

At the same time, for most Georgians (53%), said efficiency, not institutional accountability, is what matters. Moreover, most said they supported strong, unaccountable leaders (68%) to get the country out of crisis. 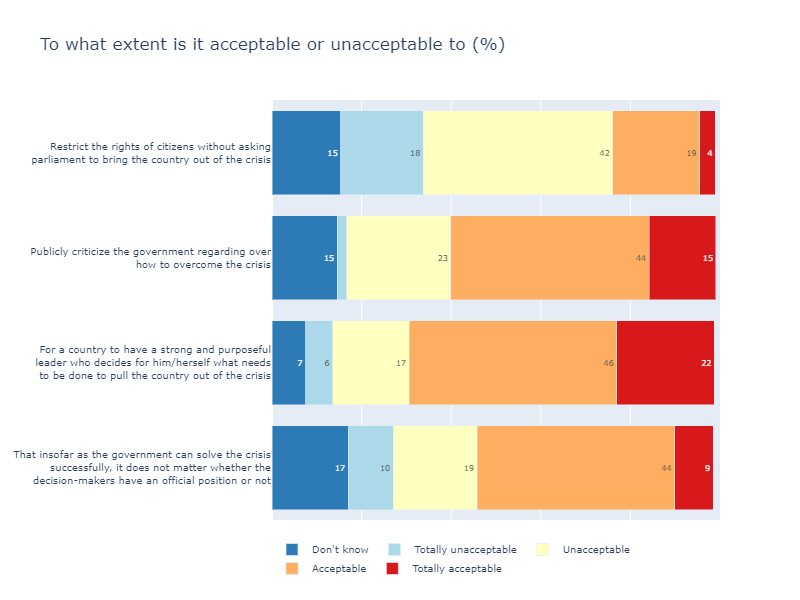 Regressions testing whether the above data are correlated with support for democracy, controlling for socio-demographic variables like gender, age, education, settlement type, employment, household wealth and ethnicity, were run. They suggest that there are no statistically significant associations between attitudes towards the above forms of governance and support for democracy.

Contrary to many commentators’ expectations, support for democracy increased during the COVID-19 crisis. However, as previous studies have indicated, support is not associated with democratic values and considerations.

This analysis shows that explicit supporters of democracy on many levels do not hold different views from non-supporters regarding the means of governance, decision making, and institutional accountability.

This again leads to the question, why do so many in Georgia report support for democracy if not for the content of that idea?

The views expressed in this article are the authors alone and do not represent the views of the Embassy of the Netherlands, CRRC Georgia, or any related entity.