Despite worsening relations between the EU and Georgia, newly released survey data from the spring of 2021 suggests Georgians are increasingly optimistic about the country’s prospects of joining the bloc within the next five years.

According to data from the newly published Knowledge of and Attitudes towards the EU in Georgia 2021 survey CRRC Georgia conducted for the Europe Foundation, there was a steep rise between 2019 and 2021 in the share of people thinking that Georgia will join the EU in the next five years.  This is of course an unrealistic expectation, as the EU accession process itself would likely take more than five years if Georgia already had candidate status.

Between 2019 and 2021, there was a 12-percentage point jump in people believing that Georgia will join the EU in the next five years. This growth marks a recovery in optimism towards Georgia's EU accession chances. 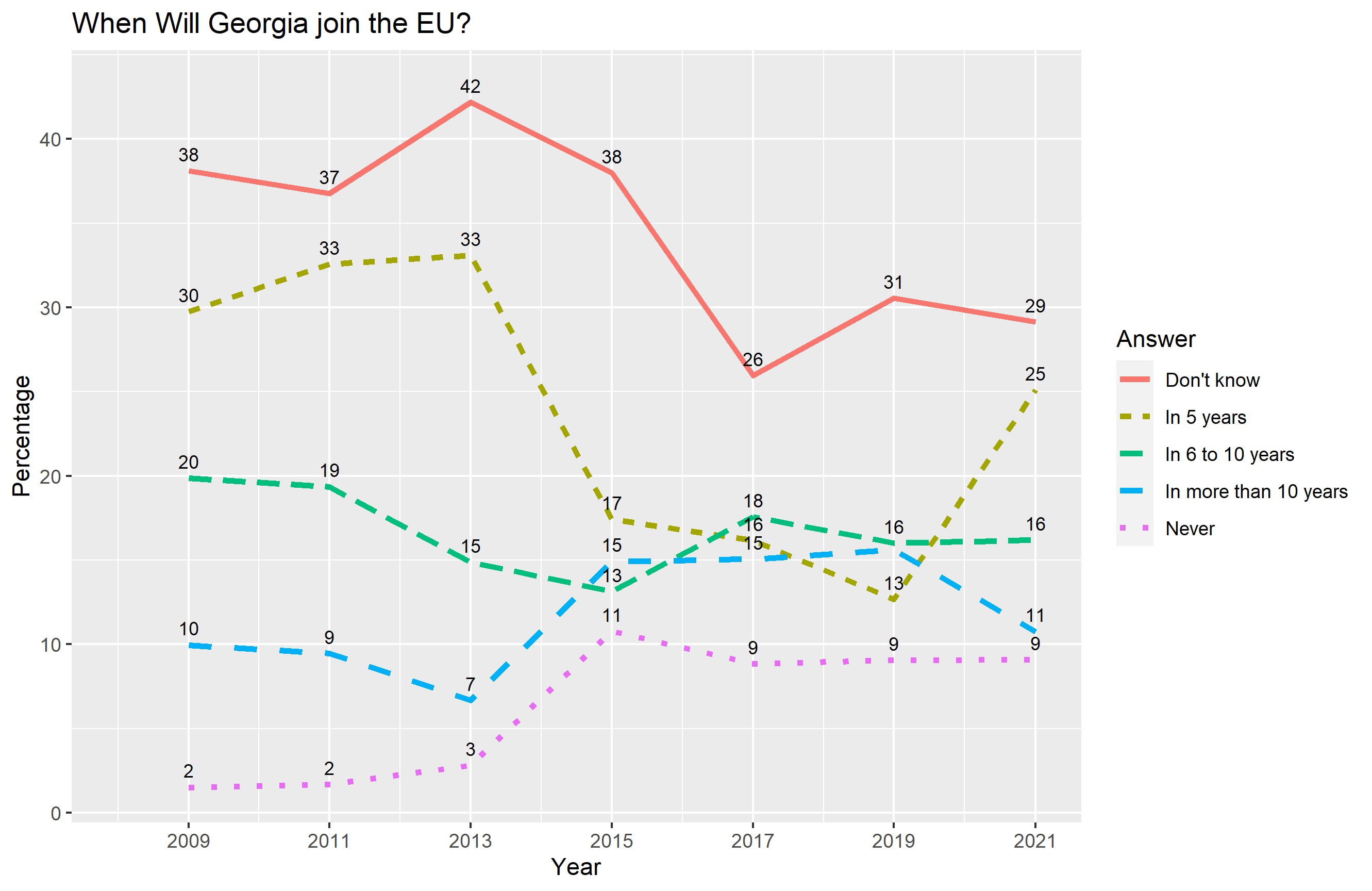 In its 2020 parliamentary election platform, later transformed into the ‘Building a European state’ parliamentary project, Georgian Dream declared the country would apply for EU membership candidacy in 2024.

As a result, one might expect that the unrealistic expectations stem primarily from Georgian Dream supporters. 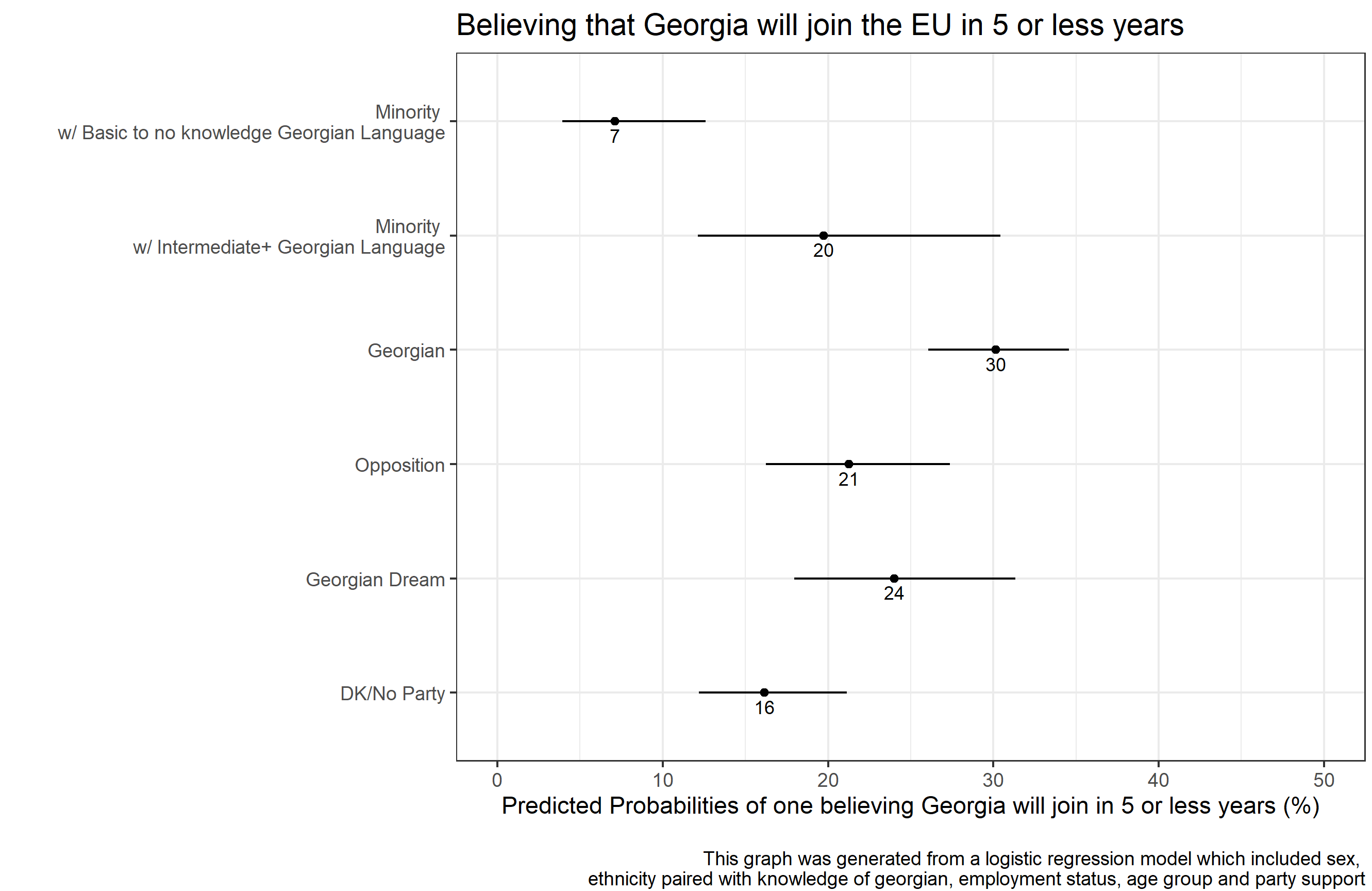 The growth in the belief that Georgia will join the EU in the next five years highlights a rising optimism in the EU, but also a rising incoherence with past experiences of EU enlargement.

Accession procedures have lasted on average between eight and nine years after the country applies for candidate status. Georgia's current foreign policy strategy states that by 2024 Georgia will apply for candidate status, expecting to be accepted as a candidate by 2030.

If accepted and if negotiations start right away (instead of in 2030), Georgia will need to join in two years to comply with the five-year belief. That is six years below the average, one year ahead of the fastest accession, and eight years ahead of the post-2000 average.

This could be possible, as there is no time requirement for EU negotiations, and every accession is dealt with individually. However, it is highly unlikely.

It seems particularly unlikely considering the increasingly tense relations between the EU and Georgia. An illustration of this was Georgia’s ‘rejection’ of the EU’s September 2021 financial assistance package under the auspices of healthy economic decision making. However, EU officials, both from the Commission and the Parliament, reiterated the fact that Georgia would not have been able to receive the aid given its failure to fulfil the rule of law and reform conditionalities. 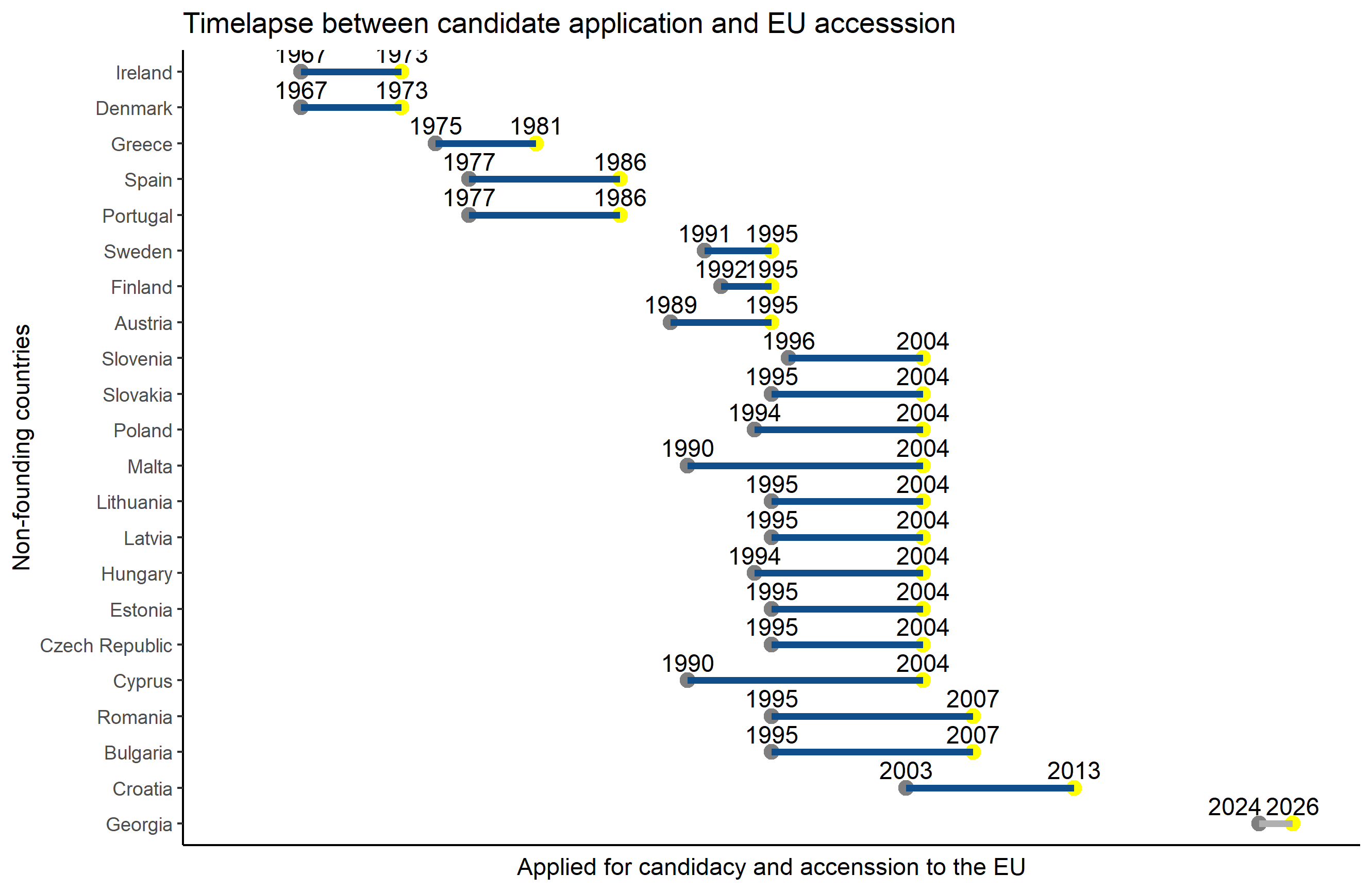 With Georgia’s relations with the EU in quite poor shape, Georgians are also increasingly optimistic about when the country will join the European Union. Whether Georgians’ optimism will eventually be translated into closer relations though, remains an open question.

The views presented in this article are the author’s alone, and do not reflect the views of the Europe Foundation, CRRC Georgia, or any related entity. 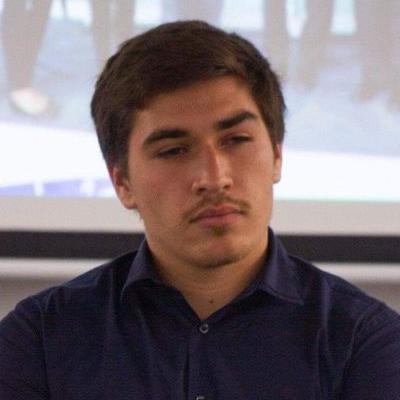 Lucas is an International Fellow at CRRC Georgia.