As Georgia’s Freedom House scores continue their stagnation for almost two decades, 59% of voters believe that the Georgian democratic experience has either ceased to be or has never been an example to emulate for neighbouring countries.

There have been contrasting assertions from Georgian political parties regarding the state of democracy in the country and increasing international concerns about democratic backsliding in recent years. This stands in contrast to past years, when former US President George W. Bush famously described Georgia as a ‘beacon of liberty’, and the praise Georgia received when it had its first peaceful electoral handover of power in 2012.

The newly released December 2021 NDI and CRRC Georgia survey suggests that public opinion mirrors general international and elite trends, with increasingly few citizens believing Georgia is a democracy, and a substantial partisan divide between the supporters of the ruling Georgian Dream party and the opposition. The data also show that few believe that Georgia ever was an example of democracy in the region.

At present, half of the Georgian public believes Georgia is not a democratic country, with only 39% believing it is. Additionally, one in 10 Georgians does not know whether Georgia is democracy at present. The public was more critical towards Georgia’s democratic standing only once during the past decade: in November 2019. This more critical assessment was measured in the aftermath of large-scale protests, and the failure to follow through on promised electoral reforms. 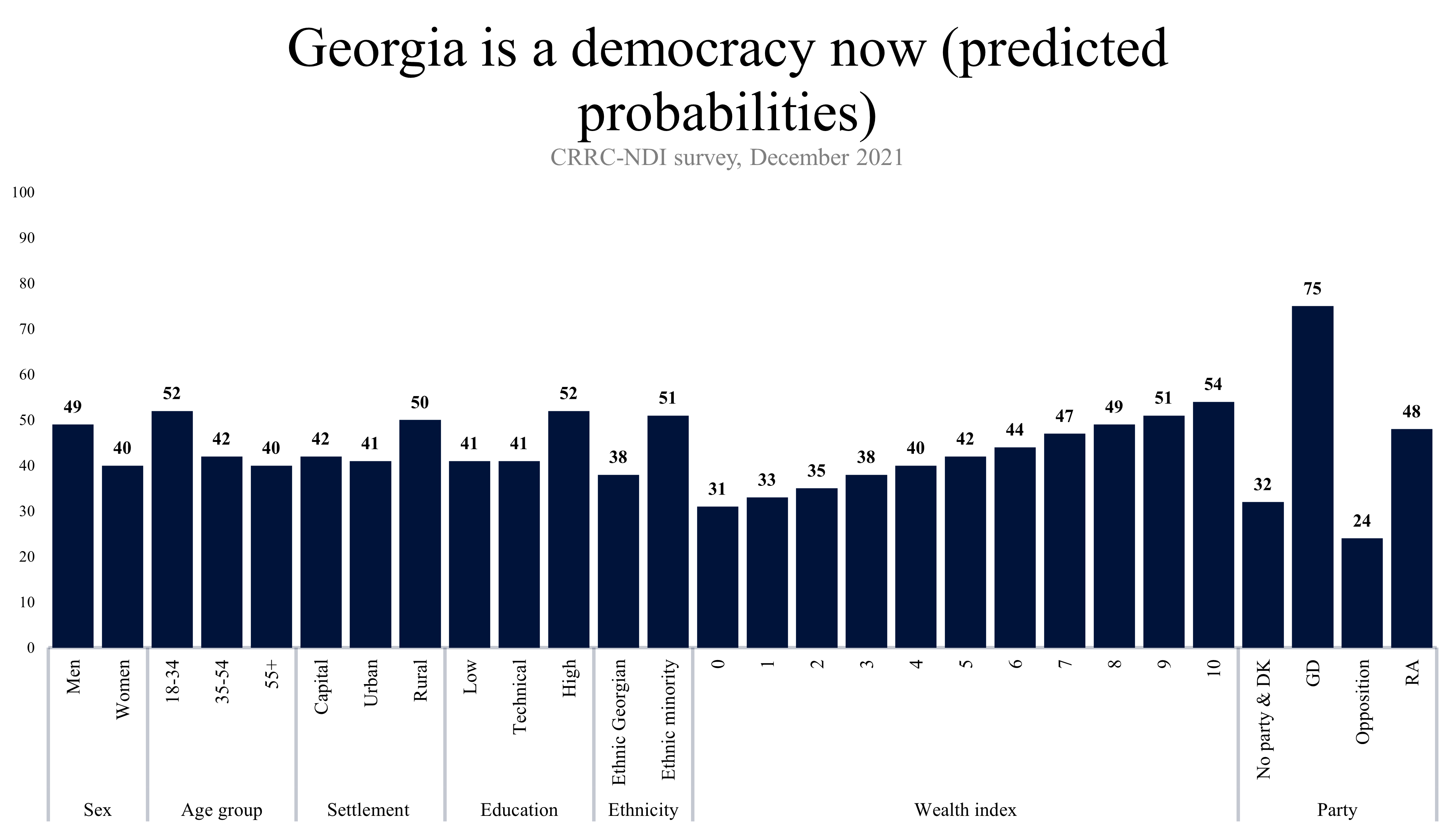 Regression analysis suggests that a number of variables help predict the public’s thoughts on democracy in Georgia. People living in Tbilisi, people with technical education, and non-partisan voters are more likely to think that democracy in Georgia has never been exemplary for its neighbours than people living outside the capital, people with other levels of education, and partisan voters.

Throughout most of the 2000s, Turkey, Ukraine, Bulgaria, and Romania registered significantly higher scores than Georgia. This holds true for the year 2006-2007 when Georgia received its highest Freedom House under the United National Movement’s rule.

In the 2010s, Georgia performed better than all neighbours it shares a land border with, including Turkey, Russia, Azerbaijan, and Armenia. Across the Black Sea, it has had a quality of freedom comparable to Moldova and Ukraine and has scored worse than Bulgaria and Romania.

This observation holds for 2014-2015 when Georgia registered the highest Freedom House score throughout the Georgian Dream's tenure  (2012-present).

The views expressed in this article are the authors’ alone and do not represent the views of NDI, CRRC Georgia or any related entity.

2. Is a new armed uprising on the horizon in Chechnya?

3. At least three dead in firework storage explosion in Yerevan

4. Ivanishvili supporters accuse the US of attempting coup in Georgia