When Georgian nurse Megi Bakradze died following an allergic reaction to the AstraZeneca coronavirus vaccine in March, there were fears that vaccine hesitancy could grow. But how did her death really affect how people feel about vaccination?

According to previous data analysis, Georgia has among the largest vaccine hesitancy problems in the world. One incident which is widely seen to have exacerbated the issue was the death on 18 March of Megi Bakradze. Bakradze was a nurse who experienced an allergic reaction to the AstraZeneca vaccine and passed away just after having gone on television to support the vaccine rollout. Her death was later ruled to be due to negligence. The tragedy nonetheless sparked fears in Georgia around vaccination.

A February NDI and CRRC Georgia poll suggested that 35% of the public wanted to be vaccinated against COVID-19, 53% did not, and the remainder were uncertain or refused to answer.

A World Bank survey which CRRC Georgia fielded from 24–30 March — after Bakradze’s death — suggested that only 24% of the public wanted a vaccine, 62% did not, and 14% were uncertain.

While the questions on the surveys were slightly different, these differences were minimal suggesting that this large of a difference would not be explained by the question wording alone.

While on 24 March, only 16% of surveyed respondents wanted to be vaccinated, by 29 March, 28% did. At the start of the fieldwork, 69% answered that they did not want to be vaccinated, but by the end this number had declined to 57%.

The share responding ‘don’t know’ fluctuated by several points with no clear trend over the course of the fieldwork.

This analysis is supported by a regression analysis, which suggests that controlling for the characteristics of respondents, there was a 1.5 percentage point increase per day in interest in getting vaccinated. 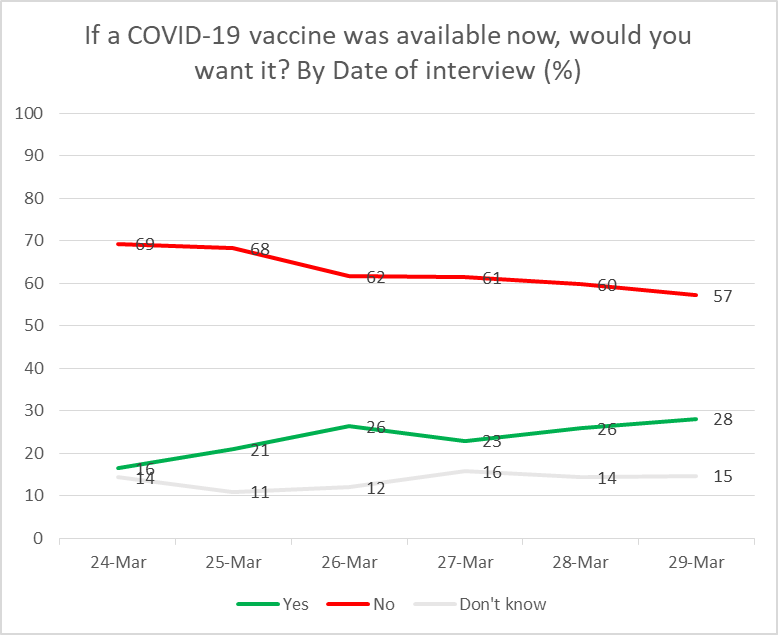 More recent data from a forthcoming survey suggests that vaccine hesitancy has now returned to the level identified in the February CRRC and NDI survey.

While vaccine hesitancy appears to have declined to levels similar to before the Megi Bakradze tragedy, the data shows that it still has far to go until a large enough share of Georgia’s population is interested in a vaccine to protect the public.

Note: The analysis above is based on a logistic regression. The outcome variable is whether or not someone wants a COVID 19 vaccine. The regression controls for age (continuous), education level (Bachelor’s degree or higher versus no tertiary education), gender composition of the household (mixed, women only, men only), number of household members, date of interview, settlement type (Tbilisi, other urban, town, rural), and sex.

The views expressed in this article are those of the author’s alone and do not in any way reflect the views of the World Bank, CRRC Georgia, or any related entity.