As Georgian authorities struggle to convince people to get vaccinated for COVID-19, data suggests that the problem could run along party lines.

Scientists agree that global mass immunisation against COVID-19 is the only pathway to putting the virus under control. Yet, the World Health Organisation has argued that actually getting people to take vaccines is ‘an unprecedented challenge’, which might undermine mass immunisation efforts.

New data suggests that the Georgian public is among the least interested in getting a vaccine globally, given available data.

On the January 2021 Omnibus survey, CRRC Georgia asked respondents whether they wanted to be vaccinated against COVID-19 if a safe and effective vaccine was available tomorrow. While half the public (48%) said yes, half were against being vaccinated (40%) or uncertain (12%).

Since this poll was conducted, the government has expanded those eligible to be vaccinated to include the general public over the age of 65, after take-up among medical workers was low.

Vaccination efforts encountered a significant challenge when a nurse who was promoting vaccination passed away as a result of an allergic reaction to the vaccine itself.

More recent polling from February, which was collected prior to the above described events, has shown an even lower share of the public wants to be vaccinated (35%).

With this context in mind, how does Georgia fare globally in terms of vaccine acceptance? CRRC data puts the country near the bottom in the global league table of countries where polling data on vaccine hesitancy is available.

Georgians are on par with the populations of the Philippines, France, and Russia regarding openness to getting vaccinated. 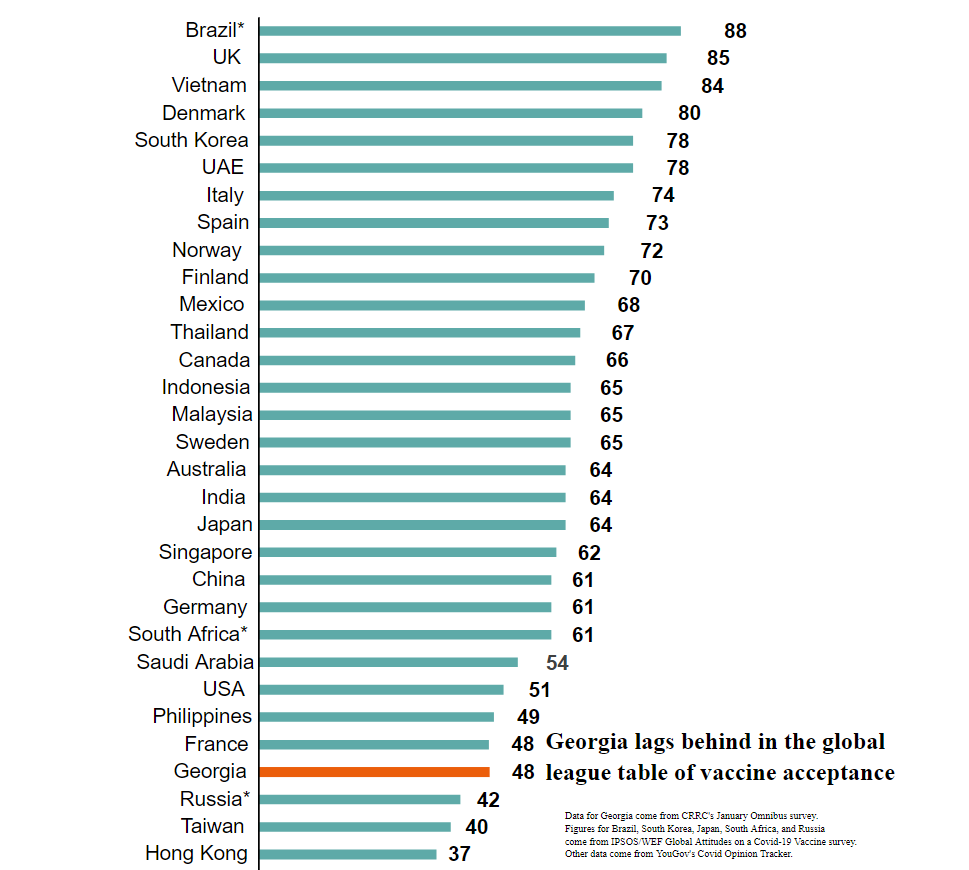 How do different groups of Georgians compare in terms of vaccine hesitancy?

More women than men are hesitant about getting a COVID-19 jab. About half of Georgian men (52%) said that they would get vaccinated compared to 45% of women. Forty-three percent of women said they would not get inoculated, with only 37% of men saying they would not.

Georgians with a higher education (53%) are eight percentage points more likely to want a vaccine than those without (46%).

Further analysis of the data shows that vaccine hesitancy is also related to other attitudes. For instance, more than half (54%) of those who believe that COVID-19 is a real threat (three-quarters of Georgians) would vaccinate. Those that think the danger of COVID-19 is exaggerated (19% of the total population) are more likely to refuse a vaccine. Only about 25% of such respondents would get a COVID-19 jab, while 66% would refuse to be inoculated.

How do those who refuse to be vaccinated or are uncertain explain their attitudes? Most (55%) respondents said that they do not trust vaccines. Seventeen percent said that they do not need a vaccine. About 10% were afraid of vaccination, and 5% said they are anxious about the vaccines’ potential side effects. Two percent named other reasons, while 11% were unsure.

Notably, opposition supporters are almost twice as likely to say that they do not trust vaccines (72%) than those that identify with Georgian Dream (38%). While this finding should be taken with caution due to the small sample size, the differences are still suggestive.

Georgia’s vaccine hesitancy problem might partially stem from misinformation. An earlier analysis showed that almost the entire population believed in false facts about vaccines, such as jabs causing autism, that they negatively affect children’s development, or harm the human immune system.

Another reason for such hesitancy could be political. As vaccine reluctance in Georgia correlates to political feelings, further calls for division along partisan lines might well undermine the public’s trust in the process of mass immunisation.

Instead, politicians should bear in mind an acute public health emergency, set aside political differences, and endorse a consensus about vaccination.

The analysis above is based on series of multinomial regression models predicting vaccine hesitancy. Demographic controls include gender, age, settlement type, employment status, ethnicity, education, assets index, internet usage, experience of been infected by COVID-19, attendance of religious services and presence of children in the household. Attitudinal predictors control for party affiliation, trust in the government’s ability to deal with the COVID-19 situation, perception whether COVID-19 is a real threat, and optimism regarding COVID-19 situation.