Opposition parties and some observers reported the engagement of dzveli bitchi, a term roughly equivalent to wise guys or hoods in English, in election-related activities prior to the October 2021 local elections. Data from an ISFED and CRRC Georgia survey suggests that a substantial share of the public also reported seeing the same.

While the survey on the pre-electoral environment saw a large share reporting seeing dzveli bitchebi near election precincts in the year prior to the elections, reported sightings varied significantly based on which political party people support. Even so, some Georgian Dream supporters still reported seeing dzveli bitchebi around election precincts.

One in nine (11%) of Georgia’s adult population reported seeing a dzveli bitchi near a voting precinct in the past year, 83% reported they had not, and 6% either did not know or refused to answer.

Those that had seen a dzveli bichi around the polling station felt more strongly that this was unacceptable. 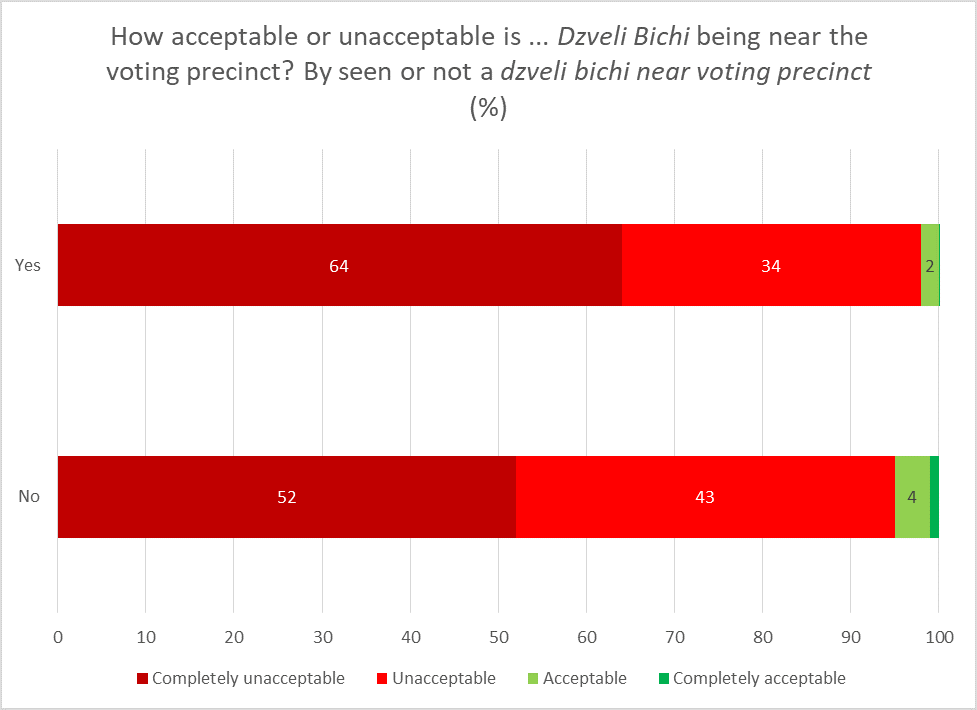 Regression analysis suggests that a number of variables predict whether or not someone reported seeing dzveli bitchebi around the election precinct.

Wealthier households were more likely to report seeing so than people in poorer households. 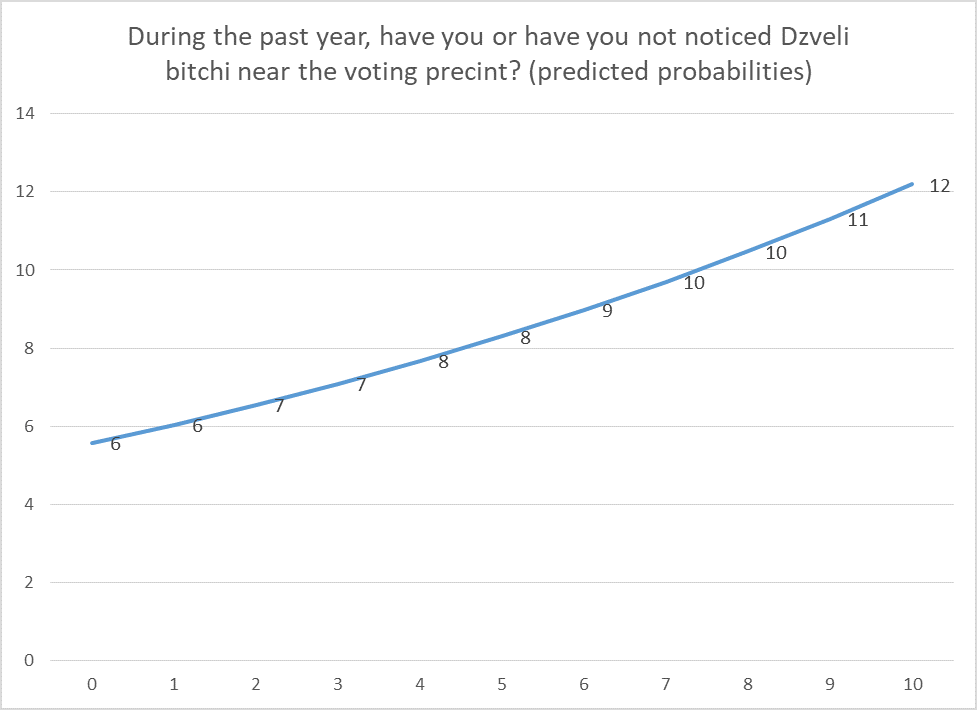 People in Tbilisi were more likely to report seeing dzveli bitchebi around the election precinct than people in other urban areas, controlling for other factors. 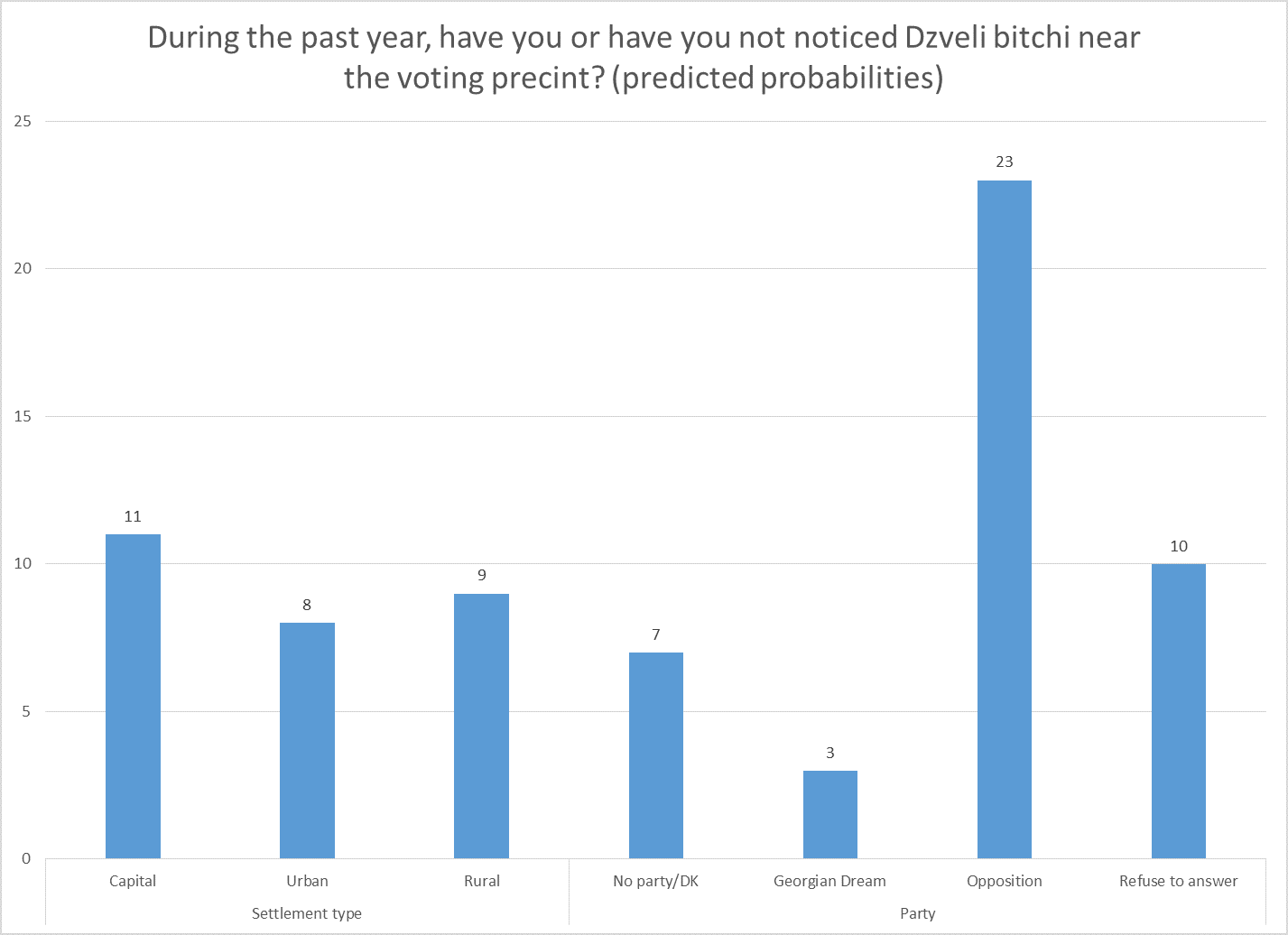 The large partisan gap on this issue may suggest that opposition supporters were reporting they saw dzveli bitchebi around election precincts in order to discredit Georgian Dream, knowing that the survey would eventually be public. This could be the case. But, the fact that some Georgian Dream supporters reported the same thing suggests that there were at least some dzveli bitchebi around election precincts in the pre-electoral period.

Dzveli bitchebi tend to be an urban phenomenon. In this regard, one might suggest that the people in rural areas are reporting what they saw on television. This again may be the case. 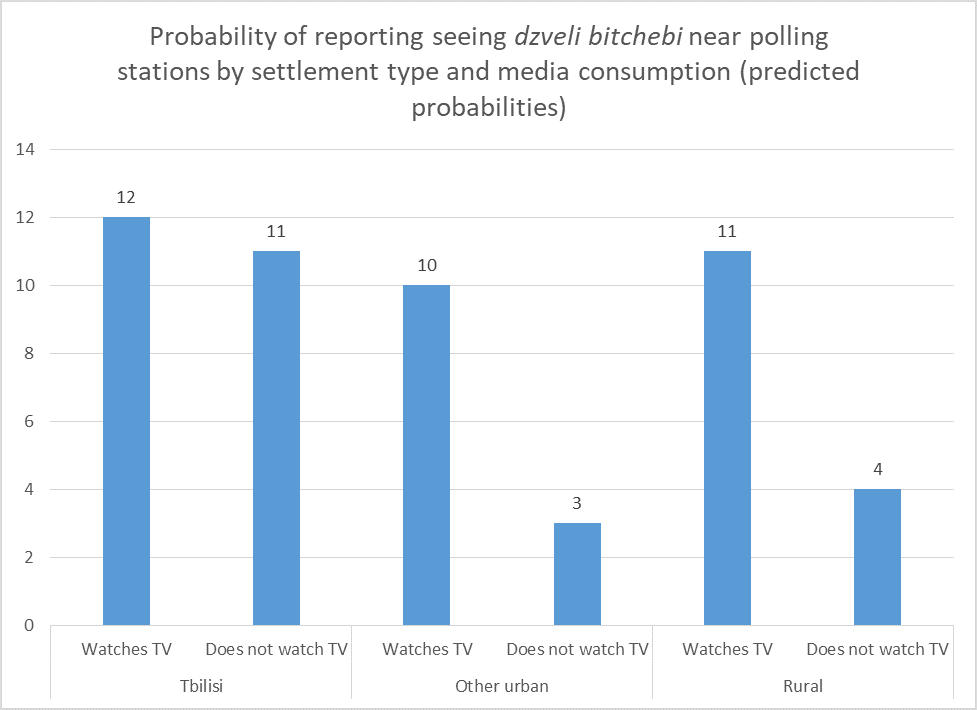 While one in nine in Georgia reported seeing dzveli bitchebi around the electoral precinct prior to the elections this year, the vast majority did not approve of their engagement in elections.

The data indicates that whether or not all of these reports are true, some of them likely are, given that even Georgian Dream supporters occasionally reported seeing dzveli bitchebi around the election precincts and that the reporting rates are consistent in Tbilisi, where dzveli bitchebi would most likely be, whether or not someone was reporting what they saw on TV on the survey.

Note: The above analysis is based on a logistic regression. The independent variables include gender, age group (18-34, 35-54, 55+), settlement type, education level, an index of durable goods (proxying wealth), ethnicity (ethnic minority or ethnic Georgian), employment status (not working, working in the private sector, working in the public sector) and partisanship.

This article was a joint production of CRRC Georgia and OC Media. The views presented in this article do not represent the views of the ISFED, CRRC Georgia, or any related entity.