Members of the ruling Georgian Dream Party have lept to the defence of party chair Irakli Kobakhidze, after an article published by OC Media found that his criticism of the West dwarfed that of his criticism of Russia since the invasion of Ukraine. 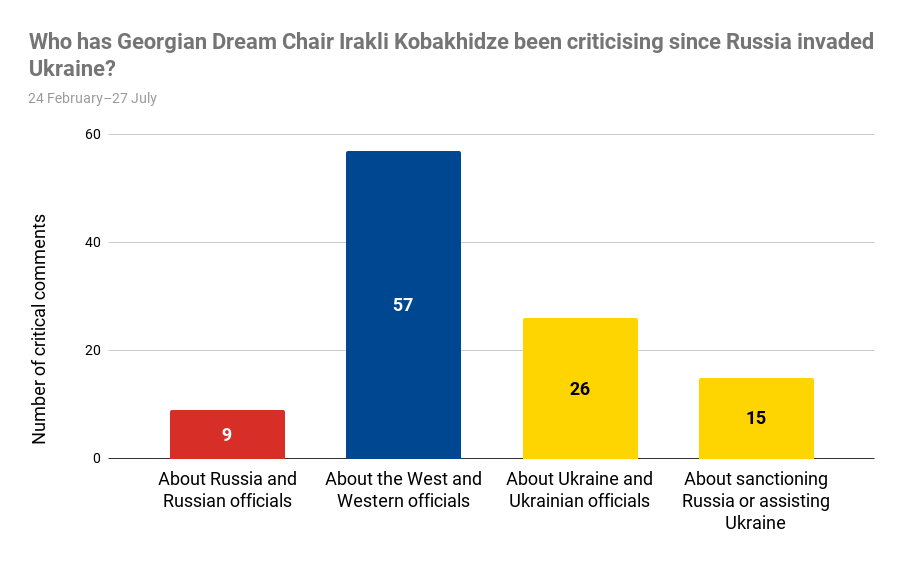 [Read on OC Media: Irakli Kobakhidze: The face of Georgia's turn from the West]

While Kobakhidze has not yet commented on the findings, several leading members of the party have defended his rhetoric.

Asked about the findings, the vice-speaker of the parliament, Archil Talakvadze, told journalists that Kobakhidze’s statements were not directed against the West and that he was only responding to the accusations made against the Georgian Government.

‘No representative of the Georgian Government, the ruling team, has criticised the West, Ukraine, or the Ukrainian people,’ he said. ‘Irakli Kobakhidze and the Georgian Dream team responded only to unjust, unsubstantiated, and slanderous accusations, which were related to evasion of sanctions. This cannot be considered a criticism of the West or Ukraine’.

On 9 June, as Georgia’s chances to secure EU membership candidacy turned even slimmer, Irakli Kobakhidze suggested that Georgia was pushed to apply for EU membership earlier than they planned as part of a conspiracy to see them fail.

In July, the ruling party chair also personally spearheaded a campaign against US Ambassador to Georgia Kelly Degnan, insinuating that she may have attempted to blackmail Bidzina Ivanishvili, and that the US embassy had persecuted a Georgian judge.

A similar position was shared by MP Beka Davituliani, who said that Kobakhidze’s harsh rhetoric towards the West was only a response to their criticism of Georgia.

‘Today, there is such a situation when, for example, criticism is heard from the side of the European parliamentarians, and the ruling team has to respond to it. Of course, Irakli Kobakhidze gives this answer. When MEPs criticise you, you give an answer, and therefore it turns out that they think in a negative context’, he said.

‘There would be questions asked by journalists everywhere, and they were counted, so take into account the contribution of journalists when we are dealing with counting the number’, Sarjveladze said.

A ‘confirmation’ of Georgian Dream’s position

A number of leading opposition politicians said the findings were a confirmation of the ruling party taking an anti-Western course.

Asked about OC Media’s findings, Nika Melia, the chair of the largest opposition party, the United National Movement (UNM), said that Georgian Dream was no longer disguising its anti-Western attitude.

Salome Samadashvili, an MP from the Lelo party, told journalists that the findings made clear the political direction chosen by Georgian Dream.

‘Georgian Dream refused the choice that the Georgian people have made for a long time, [which implies] that the future of our country should be in the Euro-Atlantic space’, she said.

Giga Bokeria, chair of the European Georgia party, responded by claiming that Kobakhidze’s criticism of the West, as well as that of other ruling party members, was managed and controlled by the founder of the party, former prime minister and billionaire Bidzina Ivanishvili.

According to Giorgi Vashadze, the leader of the opposition Strategy Agmashenebeli party, one of the main reasons why Georgia was not given EU member candidate status in June along with Ukraine and Moldova was Irakli Kobakhidze’s attacks on Western partners, which he said was highlighted by OC Media’s latest findings.

‘The citizens of Georgia have a question, why didn’t the European Union give us candidate status? [It’s beacause] the leader of the ruling Georgian Dream party attacked our European partners 57 times, only nine times, based on journalists' questions, did he mention Russia, and 26 times he attacked and criticised Ukraine’, Vashadze said.