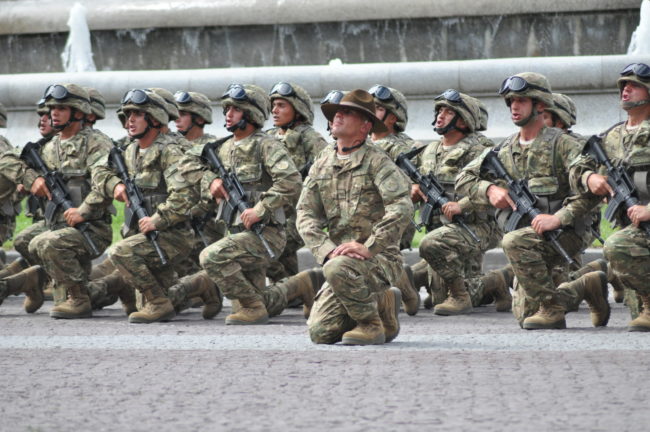 Georgia’s Parliament adopted a bill on 28 June to prevent young men from avoiding mandatory military service in the country. The move is widely seen as a response to the opposition Girchi party’s recent move to establish a ‘religion’ to help young men avoid conscription.

The bill was introduced by Irakli Sesiashvili, chair of Parliament’s Defence and Security Committee, and introduces legal penalties for anyone attempting to avoid mandatory military service with self-harm, simulating illness, falsifying documents, or ‘any other deceptions’. Penalties for breaking the law would include up to three years in prison or a fine.

The bill’s explanatory note says that ‘numerous cases have been revealed in which young men avoided conscription by injuring themselves’ and other activities, and that the bill aims to specify these actions so that they can be punished.

The bill does not mention Girchi’s initiative, however, on 11 May, Sesiashvili labelled Girchi’s religion ‘unjustifiable’, calling it ‘an artificial mechanism’ to avoid conscription, which is a constitutional obligation.

Georgia’s Public Defender said in his 24 May statement that the bill was not properly justified, and that it was unclear what made it necessary to adopt it.

The bill was adopted by the parliament on its third and final hearing on 28 June. 82 MPs voted for the amendment, with none against.

Previous to this, in June 2016, then Minister of Defence Tina Khidasheli ended mandatory recruitment of young men at the ministry — which accounted for 25% of draftees. However, It was reinstated on 14 February by new Defence Minister Levan Isoria, reversing his predecessor’s decision.

According to Georgian law, clergy and students at theological schools are exempted from compulsory service.

Later in June, after Parliament began to consider the bill, Girchi announced that since the authorities were trying to prove their church does not exist, they would purchase an inflatable church to enable members to hold prayers.